Co-ruler of the Galactic Empire

Turn Luke to the dark side.

Darth Stewie is the secondary antagonist of the Family Guy version of the Star Wars Trilogy. He was a parody of Darth Vader and played by Stewie Griffin. He was also the "father" of Luke Skywalker/Chris Griffin.

He was voiced by Seth MacFarlane, the same person who also provides the voices for Stewie Griffin's original incarnation, Peter Griffin, Brian Griffin, Carter Pewterschmidt and Glenn Quagmire on the show.

Much like the original Darth Vader, he sought to rule the galaxy and wouldn't hesitate in slaughtering innocents to achieve that goal. He appeared in Blue Harvest, Something, Something, Something Dark Side, and It's a Trap! Darth Stewie later redeemed himself by killing Emperor Carter, and accidentally had his neck snapped when his son, Luke, (Chris) tried to take his helmet off.

He later appeared alongside with Yoda (Carl) and Obi Wan Kenobi (Herbert) as fully redeemed and a Force Ghost, but he got angry at Chris/Luke, and was extremely infuriated at the fact that he killed him even though he would have made it.

Darth Stewie was far more like Stewie Griffin than Darth Vader. He was laid back, fun loving, carefree, rather obnoxious, had a very campy sense of humor, and was far more social and merciful than the actual Sith Lord. He conversed casually with just about anyone, even if he's about to kill them, and was struggling on admitting to himself and everyone around him that he's a homosexual. Darth Stewie was capable of laughing with his enemies and did not take himself as seriously as Darth Vader did. He was an avid fan of Richard Mark's Hold onto the Night and seemingly still wore a diaper due to actually being one year old (despite having a teenage son), which was a fact he used to tell Star Wars poo jokes.

He broke the fourth wall on occasion, and was notably aware that the Family Guy/Star Wars trilogy was a TV show, but seemed to just enjoy going along with it. He had a wicked side and, like Darth Vader, would kill almost anyone to fulfill his and Emperor Carter's goal. He also referred to being gay as "The Dark Side", showed no remorse at destroying Alderaan, killed his minions for trivial reasons, or cut off his son's hand. He also had very little, if any patience for his exasperating Hispanic maid, disapproved of high gas prices and missed going out dancing. Darth Stewie did, however, respect good manners and saved Luke from Emperor Carter because he asked nicely. 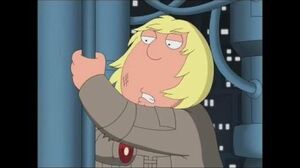