Leading the One Sith and the Sith Empire (post-betrayal)

Aid Darth Krayt in his goals (originally, abandoned by succeeded).

Betray Darth Krayt and take over as Leader of the One Sith and Darth Krayt's Galactic Empire (both succeeded).
Maintain his position as ruler of the Sith and stop any opposition to his reign.
Defeat the Galactic Alliance Remnant and Empire-in-exile.Destroy the New Jedi Order and wipe out the Jedi (all failed).

Darth Wyyrlok III is the secondary antagonist of Star Wars: Legacy and Star Wars: Legacy War and a major antagonist in the later instalments of the Star Wars Legends continuity. He was a male Chagrian Sith Lord and master who was a high-ranking member and Sith Master of the One Sith.

He was a loyal and devoted servant of Darth Krayt and was very close to him as part of a family that served him. He would later betray him, however, and become the new ruler of the Sith Empire and the One Sith as as part of his true ambitions.

Wyyrlok was the third to hold that title after his grandfather and his mother before him. He also had a daughter in training on Korriban whom he hoped would one day replace him. Following the Massacre at Ossus, Wyyrlok journeyed with Krayt to Coruscant. As the Sith-Imperial War was declared over by Grand Admiral Morlish Veed of the Fel Empire, Krayt installed himself as Emperor and established his own Sith Empire.

Over seven years, Krayt continued to establish his empire with Wyyrlok at his side. Simultaneously, the new Emperor's body continued to deteriorate, due to the presence of Yorik-Kul in his body. Wyyrlok sought remedies to the ailment, but was unable to find a cure for his Master. Krayt attempted to bring Cade Skywalker, who possessed unique healing abilities, into his Sith Order, but failed to do so. Although Krayt remained optimistic about his condition, Wyyrlok was not satisfied and he set off on a perilous journey into the Deep Core to find a cure for his ailing Master, while facing and destroying the reanimated Darth Andeddu.

Unable to find one, Wyyrlok later killed his master on Had Abbadon, after Krayt had been severely injured in a battle with Imperial Knights and criminals led by Cade, although it is later revealed that Darth Krayt was only unconscious. However, Wyyrlok was the only member of the One Sith know of Krayt's "demise"; he collected and interred the Dark Lord's body in a stasis chamber within XoXaan's Temple on Korriban. While pretending that Krayt had resumed one of his many periods of regenerative hibernation, Wyyrlok traveled to Coruscant where he assumed the Dark Lord's position as Galactic Emperor and continued implementation of Krayt's dream—to initiate every living being of the galaxy into the One Sith Order.

However, when Krayt was resurrected, he punished Wyyrlok for his treachery. After Krayt led an attack on the Temple of the Sith on Coruscant, he and Wyyrlok dueled, ending in Wyyrlok's death at the hands of his former master.

Though Wyyrlok wielded dual lightsabers, he was also skilled in the use of only a single blade. In battle, he utilized his lightsabers in conjunction with Force powers. Lord Wyyrlok was a master in the ways of the dark side of the Force, through which he was able to sense when his Master, Darth Krayt, was in peril. A common skill among many of the known Sith of Krayt's Order, Wyyrlok was adept with projecting torrents of Force lightning. He was also capable of both deflecting and absorbing the lightning attacks of others, and was even able to cause death via electrocution, as witnessed when Wyyrlok murdered Darth Krayt. Telekinesis was within the Chagrian Sith's abilities as well.

In addition to that, Wyyrlok was well-learned in Sith rituals, magics, and lore. He displayed his proficiency with Sith sorcery during his mission to Prakith, where he created complex illusions to confound and ultimately defeat the Malevolence cultists, as well as the reanimated husk of Darth Andeddu. While his mindforms were considered powerful manifestations of the dark side by the cultist Gerlun, Wyyrlok himself remarked that their creation was only an iota of his full potential with Sith sorcery. This seemingly minor demonstration of his abilities was enough to compel Gerlun into doing Wyyrlok's bidding. Wyyrlok was also a master of the technique Torture by Chagrin which allowed him to torture his oppenents mentally, an ability he used during his battle against the resurrected Darth Krayt. 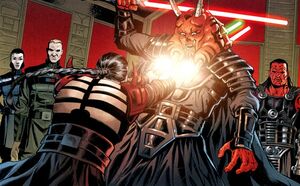