Instigate riots and anarchy in the Galactic Republic.

Aid the ARLF in kidnapping Tarsus Valorum.
Defeat Darth Bane and preserve his legacy by continuing the Rule of Two.

Darth Zannah, also known as Rain during her childhood, is the villainous deuteragonist of the novels Darth Bane: Rule of Two, and Darth Bane: Dynasty of Evil. She was a Sith who served as the apprentice of Darth Bane. She eventually defeated Bane to become Dark Lord of the Sith. She was the first apprentice under the Sith Rule of Two, instituted by her master. After killing her master, she became the master of her apprentice Darth Cognus, who would eventually murder her and succeed her as Sith master.

She is featured in the Darth Bane trilogy written by Drew Karpyshyn.

Born on Somov Rit, Zannah spent her younger life with her three cousins, Darovit, Hardin, and Root, the former two beings of Force potential. Zannah, who was then known by her nickname of Rain, and Root, however, didn't show signs of being Force-sensitive. During the New Sith Wars, Jedi scout Torr Snapit of the Army of Light arrived to recruit Force-sensitives, and Zannah, with assistance from Darovit, managed to persuade him to allow her to join them. Zannah joined the Jedi and her cousins in the Ruusan campaign, the war's final campaign.

Shortly upon arrival, Zannah was separated from the others when they were attacked by Buzzard fighters dispatched by the Brotherhood of Darkness. Her cousins presumed Zannah had perished, but in actuality, she had survived the attack but became lost in the forest. Zannah befriended a Bouncer named Laa and spent the next several days with her new companion, recovering from the traumatic experience. During the war that ensued in Ruusan, the Brotherhood unleashed a Force storm to destroy the landscape, with Zannah and Laa caught in the chaos. However, Zannah managed to protect Laa with a protective bubble. Zannah, realizing her power, hoped that she would become a Jedi Knight; however, Laa prophesied that she would become a Dark Jedi. Horrified, Zannah attempted to commit suicide, but spared her life, deciding that her fate would not be decided by Laa.

Laa was killed when Jedi Knights Petja and a companion were tasked with eliminating the Bouncers, who had been driven into a state of madness by the war, though Laa had not succumbed to the madness. A devastated Zannah used the dark side of the force to kill the two Jedi responsible, and then mourned the death of her friend. Zannah's display of aggression attracted the attention of Sith Lord Darth Bane, who had recently abandoned the Brotherhood of Darkness. Impressed by her abilities, Bane offered Zannah the opportunity to become his apprentice, which she agreed to.

After the war, which had resulted in both the Jedi and the Sith armies decimated, the survivors gathered in a cave, where Zannah reunited with Darovit, who mistakenly believed that she was Bane's captive. Darovit made an attempt to attack Bane but was easily dispatched by Zannah, though she spared his life. Bane questioned Zannah for her display of mercy, and she replied that killing him would be pointless. The two then departed from Ruusan, abandoning Darovit.

After becoming Bane's apprentice, Zannah was tasked with finding a way off-planet and meeting Bane on the planet Onderon in ten standard days. Resentful of Bane for the task he had provided her, Zannah wandered to a shuttle, going by the name of Rain once more. Mistaken for a war orphan, Zannah was boarded onto the vessel, the Star-Wake, where she was offered a chance to join them. Zannah, however, stated that she wanted to go to Onderon, and was taken to a Republic fleet.

Zannah initially conflicted as to whether she should join Bane or the Republic. After meeting Wend, the son of Bordon, a soldier of the Army of Light, Zannah came to the conclusion that she would join Bane, as Bordon had no way of protecting himself or his family from true danger. She killed the crew of the Star-Wake and flew to Onderon in order to rendezvous with Bane on the planet. Upon arrival, Zannah was ambushed by a Skelda clan, but Bane came to her aid, killing the clan. Bane, impressed that Zannah had survived his test, officially made her his apprentice.

For years, Zannah trained in the Dark Side of the force on the planet Ambria, with Bane's teachings resulting in any compassion in Zannah's heart being erased. She learned to manipulate the powers of the dark side through the Holocron of Freedon Nadd, absorbing everything she could from the Holocron. Zannah also constructed her own double-bladed lightsaber, which she named Bane's Heart.

After years of training, Zannah became an instrument of Bane's will. Bane would use Zannah as his primary contact to the outside world, sending her on missions designed to pit the enemies of the Sith and the Galactic Republic against one another. The two also concocted to spread the numbers of the Jedi thin, to limit their chances of responding to a sudden crisis en masse. During a failed mission to abduct Supreme Chancellor Tarsus Valorum, Zannah was captured, her lightsaber confiscated and taken to meet Hetton, the leader of the ARLF, the Anti-Republic Liberation Front, a small group of revolutionary separatists. After dispatching the surviving members of the ARLF, Zannah learned that Hetton yearned to learn of the Dark Side of the force, and had collected a vast number of dark side artifacts, and had knowledge of Sith Holocrons, created by Sith Lord Belia Darzu. Zannah would then manipulate Hetton to take her and Bane to Darzu's fortress to gain access to the Holocron.

Over 1,000 years before the Battle of Yavin, the Sith were weakend by internecine squabbling between their individual members, and were all but destroyed by the Jedi order. The sole survivor of the final battle on Ruusan was Darth Bane. Bane decided that the only way the Sith would survive to defeat the Jedi was to create a rule of two that allowed for only two Sith at a time - a master to embody power and an apprentice to crave that power. Bane decided that the Sith would work in secret to undermine the Republic until the time was right for the Sith to emerge and conquer the Republic, even though it would take centuries.

As part of his plan, Bane took on an apprentice named Darth Zannah, and passed on his knowledge to her While the Jedi learned of Bane and his new philosophy, they believed that the Sith had died out after Bane's death. The available historical records had few details about Darth Zannah, or the manner of Bane's death, but it was believed that Zannah had killed Bane in a duel on Ambria. 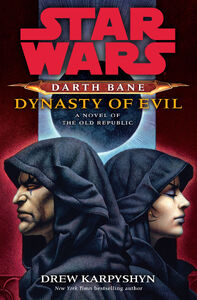 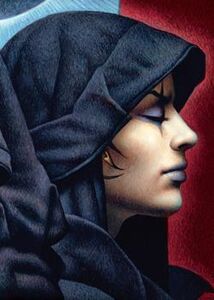 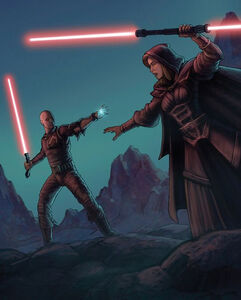 Bane and Zannah duel on Ambria