Daryl Van Horne is the main antagonist of the novel The Witches of Eastwick and the film of the same name.

In film, he was portrayed by Jack Nicholson.

Alexandra Medford, Jane Spofford, and Sukie Ridgemont are three dissatisfied women living in the picturesque town of Eastwick, New England. Alexandra is a sculptress and single mother of one daughter; Jane is a newly divorced music teacher incapable of having children; and Sukie is an extremely fertile woman with six daughters, who also works as a journalist at the "'Eastwick Word". Besides an everlasting friendship, these three women also share the similar misfortune of being abandoned by their husbands. Unaware that they are witches, the women unwittingly form a coven where they have weekly get-togethers and share their fantasies about ideal men.

The day after one such gathering, a mysterious man arrives in the town and immediately stirs up trouble by buying the town's landmark property - the Lennox Mansion. The arrival of this enigmatic stranger causes fascination among the townsfolk, all except local townswoman Felicia Alden, the Christian wife of newspaper editor, Clyde Alden. Clyde is also Sukie's boss, whom Felicia dislikes. Although Felicia is not a witch, she is somehow able to sense that this man (whose name is easily forgotten) is up to no good. One night, at one of Jane's music recitals, the strange man appears and makes a spectacle of himself, which leads to more gossip among the people. After the recital, Jane receives a bouquet of flowers with the initial "D" written on it. This sparks Sukie's memory, finally revealing the man's name as Daryl Van Horne. However, as chaos over Daryl's name spreads throughout the crowd, Sukie’s beaded necklace inexplicably breaks and falls to the floor, causing Felicia (who had mocked Daryl's name) to trip down a large staircase and break her leg. 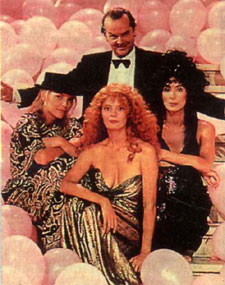 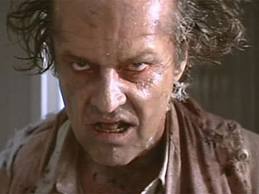 Daryl Van Horne is enraged with his girlfriends for betraying him.
Add a photo to this gallery
Retrieved from "https://villains.fandom.com/wiki/Daryl_Van_Horne?oldid=2952660"
Community content is available under CC-BY-SA unless otherwise noted.