Villains Wiki
Register
Don't have an account?
Sign In
Advertisement
in: Juvenile Delinquents, Fighters, Partners in Crime,
and 26 more

Data, Spike and Whitey are members of Griff Tannen's gang, and supporting antagonists in the sci-fi comedy movie Back to the Future Part II. Like Biff Tannen's gang, they tend to be destructive bullies for their own amusement.  Data is played by Ricky Dean Logan. Spike is played by Darlene Vogel. Whitey is played by Jason Scott Lee, who also played Caine 607 in the 1998 sci-fi action film Soldier and Bori Khan in the 2020 Mulan live-action Disney remake.

When Marty, Doc Brown, and Jennifer head to the year 2015, Doc Brown told Marty that his future son Marty McFly Jr. will end up in jail thanks to Griff and his gang for getting him involved in a robbery. To that end, Marty disguised himself as his own son to prevent him from going to jail.

When Marty goes to the Cafe 80's, he encountered both old Biff and Griff, who turned out to be Biff's grandson. When Marty Jr. went inside the Cafe 80's, Griff mistakenly thought that Marty Jr. had left the Cafe. Griff then brings over Data, Spike and Whitey to convince Marty Jr. to join them to a robbery. Not taking "No" for an answer, Griff gets Data, Spike and Whitey to mess around with Marty Jr., right before Marty took his place. Marty said "No" to Griff and tries to walk away, but Griff calls Marty "Chicken" and tried to hit him with a retractable bat. However, Marty managed to escape both Griff and the bullies.

The Hoverboard Chase and Defeat

Marty borrowed a little girl's hoverboard to escape the gang. After ending up in a lake, Marty's hoverboard stopped, because it doesn't work on water. Griff then took out his own hoverboard as Data, Spike and Whitey follow him, hoping that Griff will smack down Marty with the bat. Griff then tries to hit Marty with his bat, only for Marty to intentionally drop himself into the water, causing Griff to lose his balance, and for Griff and his gang to crash into the courthouse.

Data, Spike, and Whitey are last seen being arrested, along with Griff, for their actions. This alters the future timeline and prevents Marty Jr. from getting arrested. Even Biff, who had witnessed the events, called Griff and his gang a bunch of “buttheads” for their foolishness. 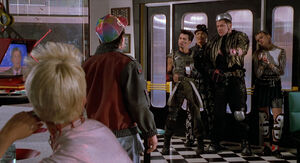 "Hey, McFly! I thought I told you to stay in here!" 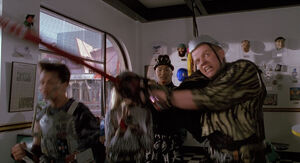 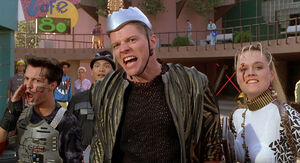 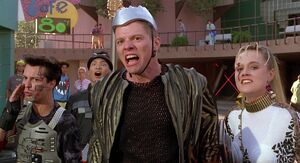 Whitey: "Unless you got power!" 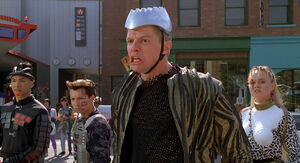 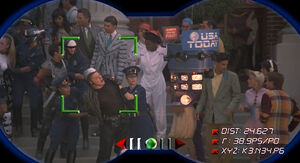 Data, Spike and Whitey's defeat: being arrested along with Griff for crashing into the Courthouse. 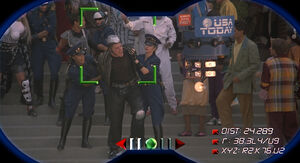 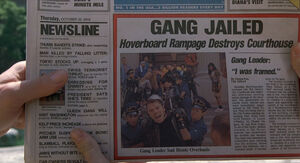 A newspaper reports the arrest of Griff and his gang.