The Daughters of Aku are seven human women who work as the assassins of their father Aku and they are major antagonists in the 5th and final season of Samurai Jack. Until six of them were killed, leaving Ashi as the last living sister prior to her erasure from existence after the death of Aku. Born and raised by their mother, the "High Priestess" of Aku's cult, they were trained for the sole purpose of killing Samurai Jack.

Being septuplets, they all share very similar physical traits consisting of black hair, slanted eyes, and black latex suits. Their only distinguishing traits amongst each other is their varying hairstyles. When out on their mission, they wear white masks.

As shown with Ashi, the black suits were revealed to be solidified tar resulted from being pushed into the Pit of Hate.

In "Episode XCII", the seven daughters were birthed by The High Priestess of an all female cult of Aku after she drank Aku's essence. After birth, the priestess had them raised as assassins to succeed where many others have failed in the mission of killing Jack. They were put through the most brutal of training, designed to sculpt them into the ultimate warriors, such as facing a hulking, muscle bound opponent when they were mere children. Even more, they have been utterly taught to think that Aku is the true savior of the planet and Jack seeks to destroy all that Aku has "created". When their training was complete, they donned the masks and head coverings, and set out to fulfill their mission.

In "Episode XCIII", the Daughters of Aku found Jack after he defeated a Beetle Drone. They pursued him into an abandoned temple, where Jack was able to hide until the Daughters found him again. One of the Daughters eventually cornered Jack into a hallway and they fought, but unfortunately, she ended up slicing her own throat with her weapon, dying much to Jack's horror, who thought that he was fighting against machines. Jack subsequently left the Daughters to their fate and jumped into a nearby river.

In "Episode XCIV", the remaining Daughters of Aku eventually found their way out from the abandoned temple, leaving the corpse of their deceased sister behind. Following their discovery of a female deer and her mate at a forest, Jack warned them to leave now or face their destiny after they scared the deers. They remembered and warned Jack that their destiny was his death, so Jack decided to take them out once and for all. The first three sisters he killed were fatally impaled by him with their own weapons, but the three remaining sisters, including Ashi, decided to attack him to death if it was necessary and cornered him in a trunk located at a cliff. However, Jack eventually managed to knock off Ashi's two remaining sisters from the trunk to the cliff below, before falling along Ashi. It's completely unknown if Ashi's two remaining sisters survived their fall, but even if they survived it, it is higly suspectable that when the big monster who swallowed Jack and Ashi inside its belly awoke, the two remaining sisters were killed by it only in case that they survived their fall. Ashi would, however, abandon her destiny and make peace with Jack.

In "Episode XCVIII", when the High Priestess found Ashi now as Jack's friend, she tried to convince her to kill him to avenge the deaths of the other Daughters of Aku, but before killing her mother to save Jack's life, Ashi answered that she was the one who killed them by ordering them to kill him.

In "Episode CI", after Jack successfully returned to the past with the help of Ashi and killed Aku, Ashi was consequently erased from existence given that Aku was her father, thus also erasing the Daughters of Aku from existence along with her.

In the video game, most of the Daughters of Aku, minus Ashi, get killed from combat again. Aku pushes a fake Ashi and gets impaled by Jack's sword. However, after defeating Aku, the time pockets the demon himself created of the future not only affected by space or time, but prevents their non-existence allowing Ashi to be the only survivor in the game's alternate ending as Jack's wife. 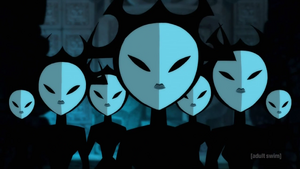 Daughters of Aku in action

Seven sisters, face of one

The Daughters ambushing Jack in the temple.

Daughters vs Jack in the woods.

Ashi pledging her loyalty towards Aku 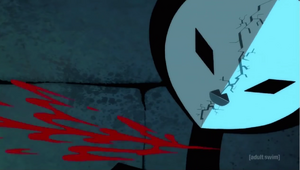 One of the Daughters is killed 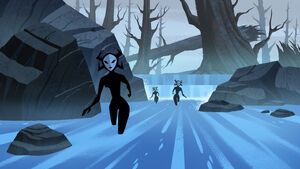 Concept art of Daughters of Aku 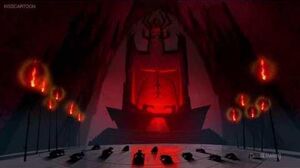