David "Dave" Norton is one of the four deuteragonists of Grand Theft Auto V, alongside Lester Crest, Lamar Davis, and Ron Jakowski. He is a corrupt FIB agent working under Steve Haines, one of the two main antagonists of the game.

He is voiced by Julian Gamble.

Little is known about Dave's background. All we know is that he has an ex-wife, and that he joined the FIB at one point in his life. Eventually, Dave Norton met Michael Townley, and made a deal with him - Dave will kill one of Michael's friends and will help Michael fake his death, with the Townley family escaping to Los Santos, in San Andreas.

In 2004, Michael Townley, Trevor Phillips and Brad Snider, rob the Bobcat Security Facility in North Yankton. At one point, Dave ambushes them, and tries to shoot Trevor Phillips. However, Brad gets in front of Trevor, with Brad being the one shot. Trevor instantly hides, while Michael checks if Brad is okay. Suddenly, Michael is also shot by Dave (although the lack of a bullet wound indicates that Dave missed). Michael desperately tells Trevor to run, and dies, alongside Brad. Trevor escapes after killing a couple of cops. Later, Brad survives and is sent to jail, while Michael is proclaimed as dead. However, the opposite happens - Brad died, and Michael survived and faked his death. Michael changes his surname to "De Santa" and moves to Los Santos alongside his family. Brad is buried in Michael's grave, while Trevor is on the run, and eventually escapes to Sandy Shores.

Some time after Brad died, Dave got a letter send to Brad, who the public believes to be locked up in jail. Dave notices that is was sent from Sandy Shores, and eventually realizes that it was sent by Trevor. Assuming Brad's identity, Dave starts corresponding with Trevor as a way to keep track on him, and maybe even kill him.

Eventually, Michael comes out of retirement and, alongside Franklin Clinton, robs a jewel store. Dave comes to Michael and warns him that it might caught the attention of Trevor, but Michael thinks his former partner is dead.

However, Trevor, while having sex with Ashley Butler, realizes that Michael is alive through the news report on the TV. After coming out outside, Trevor brutally murders Johnny Klebitz, destroys the majority of the Lost MC, and eventually hunts down Michael.

Dave's boss, Steve Haines, learns about Dave's dealings with the trio. As a result of the jewel store robbery, Haines starts looking into Dave's old case files and, seeing this as an opportunity, uses his position as Dave's superior to coerce him into persuading Michael, Franklin and Trevor to work for the FIB in their battle against the IAA to secure more government funding. Dave begrudgingly accompanies Haines while he briefs the trio about their assignments and even participates along with Haines during a raid on IAA's chemical facility.

Eventually, Haines becomes paranoid at the prospect of failing to cover his tracks. Shortly after Michael and Franklin break into the FIB Headquarters to destroy incriminating files, Haines betrays Dave and Michael and, alongside Andreas Sanchez, tries to have them arrested for committing "every fucking crime under the fucking sun". However, a crew of IAA members, a rival FIB team and a Merryweather chopper surround them. Haines, after discovering Sanchez was a member of the rival FIB team, kills him and escapes, starting a shootout, and leaving Michael and Dave to die. However, with the help of Trevor, Dave and Michael survive.

Dave later meets with Haines. Haines explains that he wants Michael and Trevor dead, but Dave convinces him that Michael can be controlled, but Trevor is too much of a liability to leave alive. Dave and Haines order Franklin to kill Trevor. Meanwhile, Devin Weston orders Franklin to kill Michael.

In Ending A, where Michael and Franklin kill Trevor, Haines mentions in a phone call to Franklin that Dave is dangerously close to being discharged with no pension. In Ending B, Dave sends an email to Trevor, revealing that he was the one who wrote all of the emails from "Brad"; he assures Trevor that his secrets are safe, but also demands that he stay away from him.

In the canon ending, Franklin spares both Michael and Trevor, and the trio, alongside the help of Lester Crest and Lamar Davis, ambush an FIB team sent by Haines and a squad of Merryweather mercenaries sent by Weston, killing all of them. Later, the trio decide who to kill next in order to tie up their loose ends; Trevor suggests killing Dave, but Michael refuses, saying that Dave must be spared so no one will come after them later. Eventually, they decide on four - Weston, Haines, Wei Cheng and Stretch.

After the four enemies have been killed, Dave, as in Ending B, reveals the truth about the messages from "Brad" to Trevor via e-mail. He later writes an e-mail to Michael and tells him to stay out of trouble and that he is now the new host of The Underbelly of Paradise in the wake of Haine's death. Michael wishes Dave well now that they have both caught some lucky breaks, and the two part on good terms.

Dave is a corrupt FIB agent, though not to the extent of his boss, Steve Haines. Unlike Haines, he is portrayed as a reasonable and polite man, preferring to solve problems amicably instead of using violence. However, he is more than capable of breaking the law if it means maintaining or advancing his career. 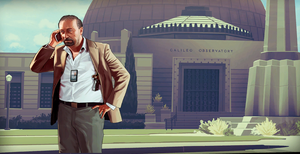 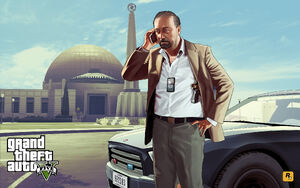 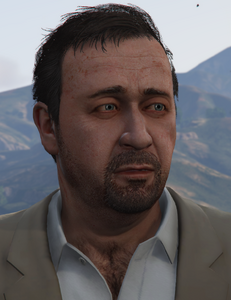 Retrieved from "https://villains.fandom.com/wiki/Dave_Norton?oldid=4290102"
Community content is available under CC-BY-SA unless otherwise noted.