Villains Wiki
Register
Don't have an account?
Sign In
Advertisement
in: Mongers, Once Upon a Time Villains, TV Show Villains,
and 16 more

David, better known as Prince Charming, is a character on ABC's Once Upon a Time. He debuts in the episode "Operation Mongoose." After the death of his twin brother James, Charming's heart was stolen by the Evil Queen, Snow White. He acted as Snow White's right-hand man, as well as a replacement for James.

He is portrayed by Josh Dallas.

This version of Prince Charming is based on both his fairy tale counterpart Prince Charming and Once Upon a Time 's version of the Huntsman. His origin story is heavily inspired by Graham's, in which he becomes a servant of the Evil Queen after she steals his heart and is coerced into engaging in a romantic relationship with her.

After Isaac Heller rewrites everyone's stories in the Heroes and Villains book, Charming becomes a slave to the Evil Queen Snow White after she steals his heart to compensate for the death of her true love, his brother James. This ensures that he is not only her lover but will do her bidding, though she is still unsatisfied with him. When Queen Snow White's malevolent seven dwarfs bring Isaac to her, she summons Charming through his enchanted heart. Prince Charming enters the throne room telling his queen that he will always find her. Snow White demands he restates his comment and he reluctantly amends himself to saying the phrase again but adding Your Majesty at the end of the sentence. The Queen then requests that he remove Isaac's head and having no choice but to oblige, Charming unsheathes and lifts his sword, but a shocked Isaac protests, trying to inform them that he knows important things as he's shoved further to the ground.

The Huntsman prepares to decapitate the prisoner, but as he readies to swing, Isaac shouts out he knows her Snow White truly loves. This causes Charming to falter, and Snow turns around yet again to face the man whose execution she just ordered. Charming's sword lightly pokes Isaac's neck as he demands to know what he just said, and the former Author recalls that the huntsman had a twin brother named James and he was the one Snow truly loved, before the tragedy. Snow White coldly decides to let the man speak, and so Isaac is relieved of Charming's sword. Isaac reveals he knows everything from a magical book and claims Regina is conspiring with a boy, Henry, to dethrone her and gives the Queen the bandit's exact location.

One of the Queen's royal carriages rides through the forest and Regina tries to rob it and knocks the guards away. As the bandit opens the carriage door Regina gasps to find Snow White hiding inside. Regina tries taking a step back, only to be kept in position by Prince Charming's sword, with the Queen's faithful huntsman having appeared behind her. Snow orders Charming to disarm Regina and he does so, swinging his blade and using it to smack the knife out of Regina's hand, to her pain.

The Queen moves to rip out her heart, but Prince Charming convinces her to question Regina about the boy's location. When Regina hesitates in answering, Snow White prepares to throw a fireball, before Robin Hood distracts her with a loosed arrow. The bandit steps inside the carriage, grabbing a sack of gold and knocking Charming back with it as she does so, and from there she leaps onto the back of Robin's horse escaping Charming and Snow's grasp.

Prince Charming later accompanied his Queen to the war council, where Snow White berates her minions have been unable to capture Regina and Henry. Her council declines to provide an answer, to her chagrin, and so she instead asks about the child, and again they don't answer. Charming weighs in, assuring his Queen that they are exactly that stupid. The Queen makes an example out of Doc by ripping out his heart and crushes it. She threatens to reduce the number even further until they complete the simple task and leaves the room with her huntsman.

Discovering her prisoner Emma has escaped, Snow White tracks her down with Lily's help. During a confrontation with the Savior to capture her and her son (who are actually his daughter Emma Swan and grandson Henry Mills) Charming accompanied the Queen and black knights to the docks. Emma tries to tell Snow and Charming that they are her parents but to no avail and the Queen commands her huntsman to kill them. At that moment, Charming spots Henry and points this out to his Queen, who is pleased, and she comments that she is going to enjoy watching him die in front of his mother and a sword fight ensues. Charming approaches to duel with Killian Jones, who holds his sword awkwardly, and Charming knocks Hook's sword with his, half knocking him off his balance.

Emma rushes to protect her son as the blades clash continuously, with Hook only acting defensively. He manages to dodge several of Charming's attacks, only just, but his reflexes soon become practically expert. When Charming prepares to slice his head in two, Killian blocks his sword with both his own blade and his hook, managing to push against his force enough to disarm him completely. He then elbows the huntsman in the face, causing him to fall to the ground, and aims his weapon at him from above as Killian discovers he is a natural with a sword and disarms Charming. Unfortunately, during his boast to Snow White, Charming gets to his feet and runs the pirate through inflicting a fatal injury. Emma is devastated, and as Hook dies in the arms of the huntsman, his killer leans in close and whispers in his ear that he never did like pirates. Emma rushes to help but Henry manages to get her to run before the Queen aims a fireball at them. Once Henry harnesses the quill and becomes the next Author, Isaac's stories are undone and everyone returns to their old lives in Storybrooke. 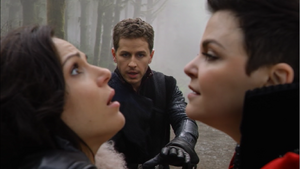 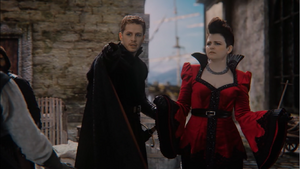 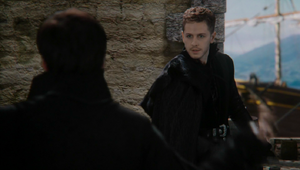 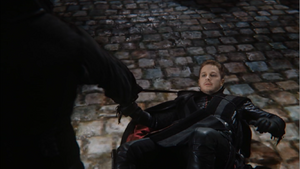