To rule Synthos and arrest those who made challenging music

Tyrannical Deitie
David is an antagonist in the Regular Show episode "Gary's Synthesizer" and Gary's evil half-brother and archenemy.

He is voiced by Troy Baker.

Gary was ounce the ruler of his home planet Synthos, but when he left 200 years ago his evil brother David took over, framed Gary for being a criminal and banned any music that was deemed too "challenging." He then created robot guards to arrest anyone who played challenging music and then had them burned to death by sending them to the sun.

In "Gary's Synthesizer" after Gary's physical form disappears when Mordecai and Rigby mess with his synthesizer they go to planet Synthos along with skips to find out how to bring him back. They meet David and he takes them to a glass prison with two other criminals named Robert and Keith and plans to send all of them into the sun. With the help of the synthesizer they all escape and manage to bring Gary back with a hologram of the synthesizer by Robert and Keith.

Gary then challenged David to a music battle for the throne of Sythnos which David accepted. Gary managed to win by blasting David to a prison ship with discord music. The ship was then blasted to the sun which destroyed David's physical form. Then Robert and Keith destroy his disc which kills him for good. With David gone, Gary declares that everyone on Synthos shall be free to have music guide them. 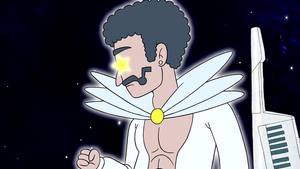 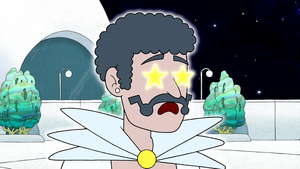 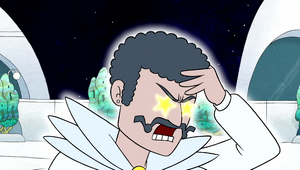 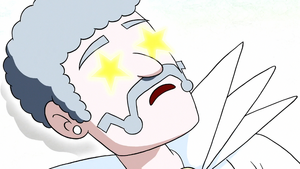