David (The Last of Us)

The Last of Us

Leader of his group

"Keep" Ellie to himself and eventually kill her (failed).

David is the main antagonist of Naughty Dog's survival horror game The Last of Us.

He is a survivalist and cannibal leader residing in a small town in post-apocalyptic America. He serves as the main antagonist at the Lakeside Resort section.

He was voiced by Nolan North, who also voiced Hades, Martin Walker, as well as some others.

At first, David appeared to be a calm, rational, and compassionate man who empathized with Ellie, agreeing to trade her medicine in exchange for food from a deer. He noted on Ellie wanting to help whoever was injured and remained seemingly caring towards her, as well as her ability to survive. In addition, David appeared to be an efficient leader amongst his group having a charismatic and calm disposition, with them showing to comply with his orders with little to no hesitation.

However, this proved to be nothing more than a façade which hid a wicked, disturbed and sociopathic man who was willing to resort to cannibalism in order to survive. Regardless, he kept up his calm behavior in the presence of Ellie, wanting to do his best to get her to come around and join him. He seemed indifferent towards his acts of treating other survivors like cattle and in turn, exercised a belief that "everything happens for a reason" and that his meeting with Ellie was fate.

Despite remaining calm for the most part, it is later indicated that David was a sexual predator of sorts. Although he at first appeared sentimental towards Ellie, later acts imply that his intentions were of a much darker nature as he becomes more fixated on the girl. On top of this, one line of dialogue from a cannibal saying that Ellie was "David's newest pet" hints that he has captured and manipulated other children and teenagers beforehand.

While pursuing Ellie during his final confrontation with her, David had foregone any of his previous sentiment or calmness, now being bent on finding and killing the girl once and for all. His frightening dialect and jerkish movements leaning towards the true monster that David really was underneath. With killing her put aside, it seems that David had other intentions while trying to choke Ellie but was frantically killed by her before he got the chance.

Nothing is known about David's life prior to the cordyceps brain infection outbreak.

The Last Of Us

At first, David appears to be a soft-spoken and friendly man. However, it is revealed he is actually the leader of a cannibalistic group of hunters. He kidnaps Ellie and tries to convince her to join them and possibly be his lover. However, she refuses and instead insists that he kill her and eat her. Just as he and James are about to chop her up, she claims to be infected and uses their shock and confusion to kill David's right hand man, bite David in the process and escape their slaughterhouse. Ellie attempts to escape the town, but is cornered by David in a burning restaurant.

A fight ensues, and Ellie manages to sneak behind and stab David three times before they are both knocked unconscious. As Ellie gets back to her senses, she crawls towards David's machete, but the cannibal kicks her and says that it's alright to give up and that there's no shame in it. Ellie continues and David kicks her again before pinning Ellie to the floor and beginning to choke the girl (possibly intending to rape her as well). She reaches for David's machete and frantically kills him with it before continually hacking at him. Joel soon arrives and comforts a distraught and emotional Ellie.

Even after his death and moving closer to the Firefly's headquarters, Ellie's encounter with David and the cannibals still remained on her mind, with it seeming that this event costed Ellie whatever was left of her innocence. This however, also strengthened her resolve to reach the Fireflies, saying that all they've gone through can't be for nothing. 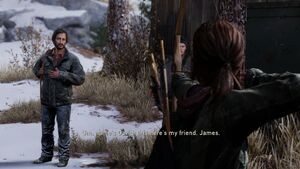 David introducing himself to Ellie. 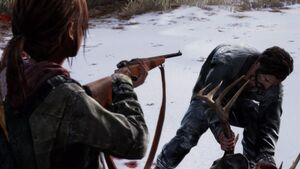 Ellie orders David to carry the deer at gunpoint. 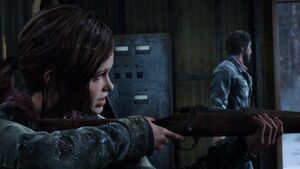 David and Ellie prepare to combat the oncoming Infected. 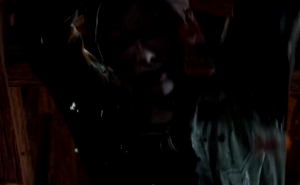