One of the Fallen Angels

To kill Issei and his harem.

To help Raynare in her goals.(both failed)

Villains Wiki
Register
Don't have an account?
Sign In
Advertisement
in: Gaolers, Cartoon Villains, Phineas and Ferb Villains,
and 33 more

David Bringdown is a recurring antagonist of the Disney Channel series Phineas and Ferb. He is a mad scientist who is a member of L.O.V.E.M.U.F.F.I.N. (founded by Heinz Doofenshmirtz and led by Aloyse Von Roddenstein).

He was voiced by Vincent Tong in his speaking voice, and Danny Jacobs in his singing voice.

Dr. Bringdown was recognized for his monstrous right-hand, possibly due to a mutation or something. He was first seen participating in the intro dance opening called Evil Tonight. He is later shown attempting to vote for the new leader of L.O.V.E.M.U.F.F.I.N.. It is unknown whether he was voting either for Doofenshmirtz, Rodney, or even for Lawrence Fletcher.

Dr. Bringdown is surprised to learn that Doofenshmirtz has actually succeeded in his plot to move the Earth into an early autumn with his latest inator. Under Rodney's orders, Bringdown and the rest of L.O.V.E.M.U.F.F.I.N. went to capture all of the O.W.C.A agents for their plan of total world domination, though he gets very upset at Rodney for using his name as an insult towards Doofenshmirtz when the latter pointed out a flaw. Eventually, Bringdown was delighted to see that the world was finally under L.O.V.E.M.U.F.F.I.N.'s grasp after Rodney uses his new -inizor (which is ten times the size and strength of Doof's -inator) to move the Earth into perpetual winter. However, the agents are freed and engage into another fight, and Bringdown ends up being tackled by Agent B (a bear). However, this happens to be the same one back in the ballroom earlier in the special, as pointed out by Dr. Diminutive. At that point, Bringdown escaped away from the warehouse along with the other villains, knowing that it is not worth it. 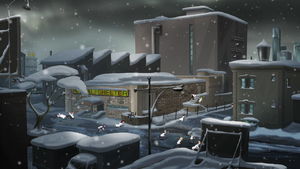 Bringdown escaping with the other L.O.V.E.M.U.F.F.I.N. villains.