David Carlton is the Deputy Prime Minister of Great Britain and the main antagonist of the 2002 British black comedy film Ali G Indahouse.

He was portrayed by Charles Dance, who also portrayed Sardo Numspa in The Golden Child, Mr. Benedict in Last Action Hero, Tywin Lannister in Game of Thrones and Alan Jonah in Godzilla: King of the Monsters.

He first encounters Ali when Ali G has gone on hunger strike and he is humiliated by his rival gangsters who pull down his pants and show his balls to the public. David Carlton sardonically notes this and invites Ali G inside Downing Street to discuss future career opportunties. David Carlton sees that Ali fancies his secretary, and so he doesn't beat about the bush: he invites Ali to become Minister for Staines. To his surprise, Ali agrees, and Ali becomes very popular with voters over the next few weeks. Eventually, Ali G is elected as Staines' new Minister, and participates regularly in political meetings, where Ali G realizes how corrupt and stupid the government is.

This is exactly the kind of behaviour David Carlton wants to make public, and so he does his best to humiliate the Prime Minister, by filming him allegedly having sex with another Prime Minister (when in actuality it was Ali G having sex with his girlfriend in the Prime Minister's clothes). The public believe the Prime Minister is corrupt and force his resignation. David Carlton gleefully steps in as Prime Minister and then turns Downing Street into a seedy world of corruption, forcing Ali G to resign. Ali G realizes the Prime Minister was blackmailed and Carlton was behind the set-up. David Carlton sends his secretary to have sex with Ali G if this will make him keep his mouth shut. He is just about to have sex with her when he comes to his senses and, giving her a condom to "finish herself off with" rushes to his friends' house, having realized where true power lies. Ali bonds with his rivals and they form an alliance to expose David Carlton's treachery to the world, David Carlton's nefarious plans including the demolition of Staines. Together, they break into Downing Street, setting up a videogame-like environment full of booby traps such as lasers and cameras. Eventually, they enter David Carlton's office, where David Carlton confronts them with promises of arrest the next day. Ali G busts into David's sideroom and confronts him right under his nose. Just as the situation gets out of hand and it looks as if David Carlton will shoot Ali G dead, Ali G swings his pendulum at David, knocking him unconscious. To avenge the people of Staines, Ali attempts to fart on David's face, but fails humorously.

Later, when Ali G has a pimpin' pad, David Carlton is forced to participate dressed as a transsexual, much to his irritation and Ali G's glee. 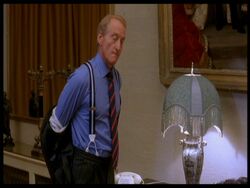 To his amusement, Ali G had David Carlton dress as a drag queen in his victory parade.
Add a photo to this gallery
Retrieved from "https://villains.fandom.com/wiki/David_Carlton?oldid=4160301"
Community content is available under CC-BY-SA unless otherwise noted.