Oppress non-whites in the name of the all-white America (failed).

David Duke is one of the two main antagonists (along with Felix Kendrickson) in the 2018 Spike Lee black comedy film BlacKkKlansman. He is based on the real-life Klansman of the same name.

He is portrayed by Topher Grace of That 70's Show fame, who also portrayed Venom in Spiderman 3, Edwin in Predators and Adrian Yates in American Ultra.

In the 1970s, the young David Duke had risen to become the grand wizard, or national director, as he put it, of the Invisible Empire of the Knights of the Ku Klux Klan.

Over in Colorado, a young African-American undercover cop named Ron Stallworth had made contact with Klan chapter president Walter Breachway over the phone. When it came time for a face to face meeting, fellow cop Flip Zimmerman posed as Stallworth. Stallworth contacted Duke directly after his membership was held up in Louisiana. Duke was impressed with the young man on the other end of the phone, telling Stallworth he spoke like a highly intelligent man instead of how he thought African-Americans talked.

On a trip to Colorado, Duke initiated Zimmerman into the Klan, then led them in watching the racist D.W. Griffith film Birth of a Nation. A Klan member and explosives expert named Walker recognized Zimmerman as the cop who sent him to the big house, and attempted to warn Duke before leaving to carry out a terrorist attack with Felix Kendrickson. However, Zimmerman was able to talk his way out of the problem and convince Duke that Flip was nothing more than a nickname he had gotten in prison.

A short time later, Stallworth, who was acting as Duke's bodyguard was able to talk Duke into having his picture taken with Stallworth. Right before Zimmerman pressed the shutter button, Stallworth put his hand on Duke's shoulder, angering the Klan leader. Stallworth was able to grab the camera before Duke could, and warned Duke that if he touched Stallworth he would be arrested for assault.

Afterwards Duke returned to Louisiana, and Stallworth's investigation into the Klan came to an end. In one last phone call between Duke and Stallworth, Stallworth informed Duke he had been duped by an African American. Stallworth ended the call by telling Duke off and hung up, leaving the Klansman to sit there in stunned silence. 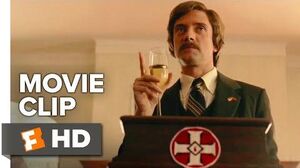 Retrieved from "https://villains.fandom.com/wiki/David_Duke?oldid=4199943"
Community content is available under CC-BY-SA unless otherwise noted.