Create and lead Tomorrowland (past but succeeded).

Maintain himself as the mayor and governor of Tomorrowland and cause Athena's demise even if she sacrificed herself (succeeded).
Take Frank Walker and Casey Newton back to the real world and to kill them both.
Use the Monitor facility in order to allow the apocalypse to destroy the Earth and have the human race accept it (both failed).

David Nix (also known as Mayor Nix) is the main antagonist in the 2015 Disney science-fiction film Tomorrowland (or Tomorrowland: A World Beyond). He is the malicious founder and leader of Tomorrowland and Frank Walker's arch-nemesis.

He was portrayed by Hugh Laurie, who also portrayed Prince George IV in Blackadder, Jasper in 101 Dalmatians, and Dr. Gregory House in House, MD.

David Nix is an inventor and a mayor. It is said he values technological achievement over scientific creativity.

"Frank's idea was to create things that are fun, that make people’s lives better because they bring pleasure and joy, and express hope. Nix is only interested in the more utilitarian platform of research; life for him is an endless scientific quest because he believes that man was put on this Earth to accumulate and develop knowledge."

Frank Walker first encounters David Nix at the 1964 World's Fair. When an 11-year-old Frank enters "Tomorrowland", Nix is the one that kicks him out. Nix values technical accomplishment over creative thinking, and, when he throws Frank out of Tomorrowland, he banishes every other creative thinker. This allows Nix to focus purely on aesthetics and technical advancement for its own sake.

Years later, Nix has been the mayor of Tomorrowland for many years, and has become corrupt and deluded. After discovering that the world would end, he used the Monitor to broadcast the warning to humanity. When they did nothing to stop it, he continued broadcasting, causing the world's end to hasten and become a self-fulfilling prophecy. After Frank returns with Athena and Casey Newton using the Spectacle, a secret entrance created by Plus Ultra, they meet up with Nix, who takes them to his Monitor and reveals that the world is coming to an end by a large apocalypse. Casey questions why Nix doesn't just warn the Earth, to which he replies that what will happen will happen only on Earth, while Tomorrowland will survive the destruction.

Casey questions why couldn't humanity of Earth come to Tomorrowland, but Nix refuses to let them, saying that humanity will mostly likely destroy Tomorrowland like they did to Earth. Casey refuses to believe Earth will end, and the future slightly changes as a result, a fact that Frank glimpses and tries to tell Nix about it, but Nix refuses to listen and orders him and Casey to be arrested instead. Later, Frank, Casey and Athena discover that Nix's monitor has a side effect: when it utilizes tachyons to obtain information about the future, it introduces a backfeed into their flow, thus making the future it shows all the more likely, creating a self-fulfilling prophecy; therefore, destroying the device can avert the apocalypse. The trio then go to see Nix again, only to see Nix prepare to deport them to an uninhabited island. The trio try to tell Nix what they have found out, but Nix refuses to listen, claiming that it won't make any difference.

In a two minute monologue, Nix reveals that he created the Monitor to broadcast the warning of the world's end to humanity, but instead of doing anything about it, humanity accepted what they saw, gave in, and repackaged what they saw into media, seeming to care only for the here-and-now, never willing to consider what their actions could mean for the future. As Nix speaks his monologue, it becomes apparent to the trio that Nix himself has given up and actually intends to allow the apocalypse to destroy Earth, and thus allow Nix to build a new world in his own way.

After Nix reveals the truth, he tries to send Frank, Casey and Athena into the portal that will take them to the uninhabited island, but the trio resist. In the ensuing fight, Frank tries to use a bomb to blow up the machine, but the bomb goes off outside the portal and the explosion pins Nix's leg under debris. Nix tries to kill Frank with a plasma gun, but is stopped by Athena who takes the blast; her self-destruction results in the destruction of the Monitor. The Monitor's remains then fall on Nix, crushing him. 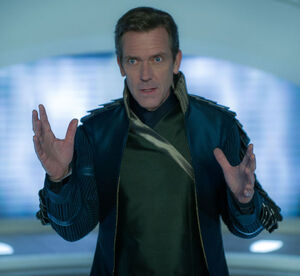 Nix meeting Frank upon his arrival in Tomorrowland.

Nix directing Frank to a building housing his Future-Prediction Sphere.

Nix watching Casey Newton's view of the future and the destruction of Earth.

Nix preparing to explain the reasons for his actions to Frank and Casey.

Nix after he inadvertenly shoots Athena with a plasma gun.

Nix is crushed beneath the falling remains of his exploding Monitor.