David Rabb is one of the main antagonists in the manga version of Yu-Gi-Oh! GX.

He arrived at Duel Academy along with Zane and another antagonist named Reggie MacKenzie. He, along with Reggie, participates in the tournament hosted by Duel Academy.

He dueled against Syrus and easily defeated him. He later crossed paths with Jaden, but didn't duel him because Jaden was a Slifer Red student.

Because he is fluent in both English and Japanese, he is able to converse with the other characters.

David dueled Chazz in the Semi-Finals. Despite David actually harming Chazz, he was still defeated by Chazz. Following his defeat, the earring that he was controlled through shattered and released David from the control of the evil spirit known as Tragoedia. 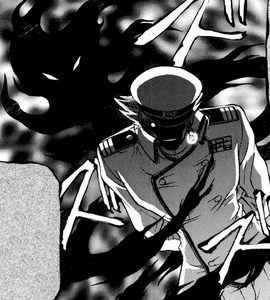 Possessed David Rabb
Add a photo to this gallery

Retrieved from "https://villains.fandom.com/wiki/David_Rabb?oldid=3520951"
Community content is available under CC-BY-SA unless otherwise noted.