Appearing in the Exiles series, he began life as a tragic character but quickly grew into a xenophobic and ultimately genocidal terrorist despite efforts by the Exiles to prevent him from becoming a villain, an example of a set destiny (in David's case, an extremely dark one).

Born to a dystopian reality in which mutants were hunted by Sentinels, David was confined to a camp for mutant teenagers after being orphaned at a young age. His power was immense even at this early stage of development and the Time-Breakers became concerned that he may pose a serious threat to his native reality.

Thus, the Time-Breakers decided the young David had to die and sent the Exiles and Weapon X to slay him before he could grow into a potential villain, ultimately Sabretooth struck an alternative deal with the Time-Breakers and opted to raise David as a son, to try and show him a better way.

Within a matter of months, David had grown into a powerful student and ultimately gathered a group of mutants to topple the Sentinel tyranny of his native reality in a decade-long struggle, yet as this struggle went on David grew more arrogant, paranoid, and cruel.

Ultimately, David would fulfill his dark destiny when his crusade against the Sentinels ended. Not content with merely freeing mutants from the camps and ending the Sentinels powers, he wanted to punish humanity for the crimes they had committed and thus forced Blink to activate her teleportation powers and massacred all humans responsible for the Sentinel project.

David's bloodlust then became psychotic and he began using Blink as a living weapon, teleporting to random locations and massacring thousands of largely innocent civilians with Blink's teleportation, forcing his victims to teleport into walls, each other and worse in what can only be described as terrorist killings that lasted for days, with Blink unable to stop him as he went on his rampage, intent on killing every human on Earth.

After a few days of bloodshed David's madness was silenced when Sabretooth managed to track his surrogate son down and ripped out his heart to stop his killing and rescue Blink, in a twisted irony killing the very mutant he had worked so hard to raise and teach.

David was what Marvel classes as an Omega-level mutant, in short these are characters that have unlimited potential and host such powerhouses as Kid Omega, Mad Jim Jaspers and Hyperstorm. David did not manifest the godlike powers of Jaspers or Hyperstorm but was by no means an ordinary mutant and easily overpowered entire squadrons of Sentinels. He also effortlessly captured Blink and forced her to use her teleportation abilities to kill and maim thousands of humans, planning on killing the entire human population in this gruesome manner.

He was described as "Professor Xavier, Magneto and the Phoenix Force merged into one". While powerful, it is worth noting David did not manifest the full power of the Phoenix Force and given his ultimately genocidal, terroristic nature it is very fortunate he did not.

Also, despite being deceased it is possible David could return as Omega-level mutants can bypass death itself, as happened with Kid Omega and Jaspers. 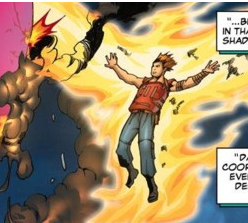 Retrieved from "https://villains.fandom.com/wiki/David_Richards?oldid=3888797"
Community content is available under CC-BY-SA unless otherwise noted.