The League of Gentlemen

Owner of a Construction Company (formerly)

Playing with his victims (when a "local")

David Tattsyrup is a character in the dark comedy The League of Gentlemen and was the son of Edward and Tubbs Tattsyrup, the properties of the Local Shop for Local People. He appeared at the end of the first series in which he was an ordinary young man with a successful construction business, until he was turned into a "local" by his father Edward, in which by the second series David was a lot more monstrous. He was played by Mark Gatiss in the first series.

David was born to incestuous parents Edward and Tubbs Tattsyrup, but left Royston Vasey to go to London in order to study. This caused his father Edward to disown him, and his mother Tubbs to somehow forget about David's existence for many years. Once leaving college, David set up his own construction company, but wished to make contact with his parents again and managed to get a contract to develop a new road connecting to Royston Vasey, which served as a running arc in the first series as Edward attempted to stop the development taking place.

In the last episode "Escape from Royston Vasey" David turned up and his father and mother's Local Shop, in which he was first met by Tubbs who didn't recognize her son. David revealed his identity, and told her that he had made a success and would like her to come back to London for a visit. Edward arrived and was angry and hurt by his presence, feeling David "betrayed" him and the locals. David was determined to show Tubbs the outside world, as it was clear Edward was keeping things from her in order to keep her in the shop.

Despite this however, David was approached by his father and later became "local", sporting a pig nose like his parents and joined his father at the shop, which hurt Tubbs as she wanted to leave. In the end though Tubbs returned to the shop, with a lost young man Benjamin in tow.

David doesn't physically appear in the series, although it seems that spending time as a local has developed him into a monstrous being. The young man Benjamin that Tubbs picked up was kept as a "play thing" for David and locked in a small wire cage outside the shop. Benjamin managed to escape his captors, which led to Tubbs and Edward capturing another man who was doing landscape painting on the moors, believing the man was there to take David away. David is shown to have been locked in the attic, with Edward and Tubbs keeping him like a feral animal.

During the series Edward and Tubbs come to the conclusion that they won't be around forever to run the shop, and with David been too long away from the town they decide he needs a mate. They kidnap transsexual taxi driver Barbara Dixon as his new bride (although Barbara is willing) and they pair get wed in the final episode. Sadly though, the locals of the town blame the Tattsyrups for the nose bleed epidemic sweeping the town during the series and burn down the shop. Barbara manages to escape, but David is killed in the blaze.

It is shown that Barbara is pregnant to David when she lays a wreath at the destroyed shop. At the end of the series she gives birth to twins - a boy in girl - who also have pig noses like his parents.

David when he was normal. 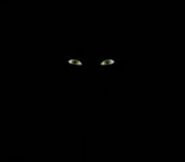 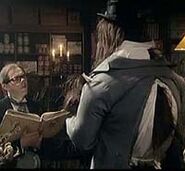 David and Barbara's babies.
Add a photo to this gallery
Retrieved from "https://villains.fandom.com/wiki/David_Tattsyrup?oldid=3633979"
Community content is available under CC-BY-SA unless otherwise noted.