The Devil of the Sea

Demonic pirate
Davy Jones is a legendary figure of nautical lore, often envisioned as a Devil-like figure to sailors, he is most often associated with the legend of Davy Jone's Locker - which is a symbolic name for the bottom of the sea as well as an envisioned afterlife for drowned sailors (especially those who were considered "damned").

Davy Jones himself has an indefinite form, being a symbolic being he can be envisioned almost any way one wishes - however, in recent times, he has become associated heavily with the Flying Dutchman myth, perhaps as a result of famous depictions in Pirates of The Caribbean (where his role as the Devil of the sea is elaborated on even further).

The exact reasoning behind Davy Jones name is unclear with many conflicting stories, some believing he was based on a real (or legendary) sailor, pirate or seafaring figure whilst others have theorised he is simply another guise of the popular "folk Devil" found in almost all folklore. 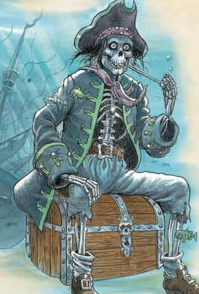 Retrieved from "https://villains.fandom.com/wiki/Davy_Jones_(folklore)?oldid=4016060"
Community content is available under CC-BY-SA unless otherwise noted.