Davy Sprocket is the fifth opponent in the puzzle game Dr. Robotnik's Mean Bean Machine. He is a western based robot who's name is a parody on Davy Crockett. He is a more difficult enemy than all the other robots to have come before. However, he shouldn't be regarded as difficult, only slightly harder.

Davy Sprocket also makes two appearances in The Adventures of Sonic the Hegdehog, where he and Arms try to capture Sonic but are tricked into running into a wall. He also appears alongside two unnamed badniks where they attack the city Mobian, but retreats before Sonic shows up. 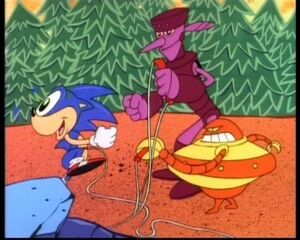 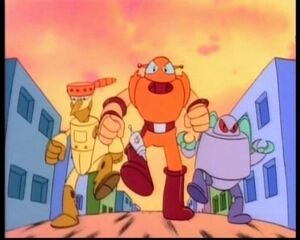 Davy with two badniks attacking Mobians, Note, Davy's color scheme was changed from pink and purple to just yellow in this episode
Add a photo to this gallery
Retrieved from "https://villains.fandom.com/wiki/Davy_Sprocket?oldid=3225368"
Community content is available under CC-BY-SA unless otherwise noted.