At first glance, Bellwether appears as a meek, shy, kind and energetic, albeit overworked sheep. She sympathizes with Judy, as she feels the two are both underappreciated and underestimated and claimed herself as Judy's friend in City Hall. She is eager to help and excited she could be of use since she feels her job as assistant mayor is more of a glorified secretary job. It is obvious throughout the film that she mostly does paperwork and menial jobs while Leodore Lionheart is somewhat of a glory hound who dumps the work on her and gets every attention.

Her racism does not seem to be limited to predators; though she claims that all prey animals are superior to predators, she seems to favor sheep as her entourage is entirely consisted of such from her hitman Doug to several corrupt cops.

However, the entire "savage fox" act turns out to be a ruse planned by both Judy and Nick, who reveal that they replaced the serum pellets in Bellwether's gun with blueberries in order to trick Bellwether into revealing her plan. Despite being dumbfounded by this turn of events, Bellwether angrily threatens to set both Nick and Judy up for her crimes just like she did to Lionheart, claiming that it is "her word against theirs". However, Judy reveals that she used her voice recorder to record Bellwether's confession, and plays the tape just as Chief Bogo and several other ZPD officers arrive, much to Bellwether and her accomplices' shock. 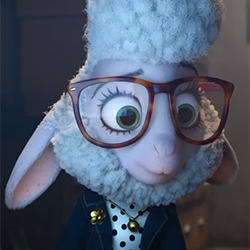 Retrieved from "https://villains.fandom.com/wiki/Dawn_Bellwether?oldid=3510727"
Community content is available under CC-BY-SA unless otherwise noted.