Head of the Grady Memorial Hospital

Keep Beth in the Hospital (formerly).

Trade Beth and Carol for Officer Shepard and Licari (succeeded).
Replace Beth with Noah.
Torture or kill those who disobey her (both failed).

Lieutenant Dawn Lerner is a survivor of the outbreak in AMC's The Walking Dead and is the leader of Grady Memorial hospital. She served as one of the two primary antagonists of the first half of Season 5, the other being Gareth. More specifically, she is the primary antagonist of the second quarter of Season 5.

She was portrayed by Christine Woods.

Dawn is described as "A formidable woman. She is stern, focused and intensely pragmatic, but has a tendency to crack under pressure and lash out violently. Though she presents a stoic facade, she has a softer side that she feels the need to suppress in order to be an effective leader. She is charismatic with a vibrant energy…".

As season 5 progressed, we began to see that her real façade was her softer side. As seen on many occasions, she would use this facade to use people to make them believe that she actually cared for them to make them feel that they owed her something. Such as with Beth, Dawn protected her, but not for Beth's personal well being but for her own sake so she could have Beth on her side in case any incidences occurred. For example, when there was the brawl between Dawn and one of her officers, Beth saved Dawn by pushing the other officer down the elevator shaft.

As for her charisma and vibrant energy it consisted of violence and an obsessive unnecessary need for control. Examples of this were when a valuable patient was being lost, she smacked Beth in the face to gain some measure of control, and perhaps the most obvious evidence was when she threatened action unless Rick's group handed Noah over. Dawn did this knowing that Noah would give himself up thus giving her power and control over the situation.

Dawn was a police officer with the Atlanta Police Department. She worked with a senior officer named Hanson. She also has Obsessive Compulsive Disorder (OCD) which affected her role as leader of the survivors of Grady Memorial.

Dawn is first introduced when Beth Greene wakes up in Grady Memorial Hospital. Dawn tells her that Beth owes her officers for saving her. She is later seen whisking in Gavin Trevitt, who fell from a second floor window. After she learns that Trevitt is a doctor, she urges their current physician, Dr. Steven Edwards, to save his life, despite his protests. When Dr. Steven tries to explain to Dawn that the man can't be saved, Dawn slaps Beth to motivate him, re-opening her sutured cheek. She later forces Beth to help Dr. Steven amputate Joan's arm after she was bitten trying to escape. Joan tries to resist, but Dawn refuses to let her die and cuts her arm off.

Dawn brings Beth some food and Beth tells her she's not staying any longer than they make her. Dawn tries to sell her on staying at the hospital. She thinks that the world will return to normal and it's important to keep safety and order. "Try to look at the good we're doing." she tells Beth. Beth eats the food but doesn't seem to change her decision to leave. When Gavin dies, Dawn demands to know what happened, Noah takes the blame, saying he accidentally unplugged the ventilator. Dawn tells an officer to take Noah to her office. When Beth tries to explain what happened to Dr. Edwards, he says, "You gave him Clonazepam (a different drug, a sedative), right?" Beth is confused and hears Noah being beaten in the other room.

Later, Dawn comes to Beth's room. She knows that Noah didn't unplug the ventilator. She says she had to beat Noah. She proceeds to tell Beth that she isn't the greater good and hence isn't keeping her worth. "The wards keep my officers happy. The happier my officers are the harder they work to keep us going." She is later seen patrolling the hospital and Beth tells her that Gorman and Joan are looking for her in her office. When she arrives, she is attacked by a zombified Joan and the officer with her is killed before she can kill Joan. She later puts both officers down before they can turn and meets with Beth after she is recaptured.

Dawn calls Beth out for having Gorman killed but is shocked when Beth retaliates with the fact that Gorman tried to rape her and Dawn let it happen. She tries to justify her actions and tells Beth that she believes government forces will eventually rescue everyone, but Beth is not very convinced by this. Dawn looks at the floor and sees a shattered picture of her and Hanson before lashing out at Beth again. At the hospital, Dawn is dealing with her officer’s inability to find Noah while Beth mops the floor and listens. When the conversation turns to Carol, and the officer wants to let Carol die, Beth interrupts on Carol’s behalf. Her outburst prompts Dawn to back the officer against Beth by telling the officer to pull the plug on Carol. When the officer leaves, Dawn explains this, and that she can't help Carol. She also give gives Beth a key to the drug locker and tells her to save Carol.

Dawn was shown exercising in the beginning, whilst talking to Beth. Later on, after a confrontation with O'Donnell, it ends with Beth killing him. After the exchange between Rick's group and the people of Grady Memorial Hospital, Dawn demands for Noah to stay as well. Beth rushes forward and gives Noah a hug. After hearing Dawn say "I knew you'd be back", Beth approaches Dawn telling her that "she gets it now" before stabbing her with the scissors she had hidden in her cast. Dawn immediately shoots Beth in the head, and is seemingly horrified by what she has done. As she begs for Rick's group to wait before doing anything, Daryl approaches and coldly shoots her in the head, killing her. 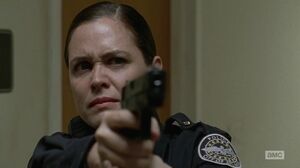 Dawn Lerner in the Season 5 episode "Coda" before an altercation with a fellow officer of her group.