Bossing people around.
Flirting with boys.
Listening to her theme song "La La" by Ashlee Simpson.

Burn the school down (failed).

Dawn Stiles was a popular Smallville high school student who was rich and pretty but also a snob, bossy and very rude to others.

She was portrayed by Beatrice Rosen, who also played Natascha, a Russian ballerina dating Bruce Wayne in The Dark Knight.

She is described by her former boyfriend as having an irritating high-pitched voice. Dawn Stiles marched up to confront Chloe Sullivan, mad about the article denouncing the idea of electing a prom queen, saying it is just a popularity contest.

Dawn is fiercely popular and is the front-runner to win the crown. Chloe isn't intimidated and sarcastically remarks that Dawn will win anyway.

But to Chloe's surprise, apparently she has been nominated too. Dawn and her buddies were discussing prom preparation at the Talon when she spots her boyfriend Billy Durden talking to another girl. Dawn acts obnoxious and bossy and Billy surprises (and upsets) her by openly dumping her. She says it doesn't matter, she'll just get a new prom king.

Afterwards, Dawn grabbed a yearbook and went out looking for a replacement boyfriend, for the prom. While driving home, Dawn is busy looking at the school yearbook for potential dates, instead of paying attention to the road.

She sets her sights on Clark, but becomes distracted when she called her friend for his phone number. The car crashes through the guardrail into Carlton Gorge, revealed to be full of meteor rocks.

After her untimely death in a car crash, she was exposed to the meteor rocks post-mortem and was gifted with an ability to take spiritual possession of unsuspecting people's bodies. Dawn wakes up, stumbling onto the road. She flags down an upcoming vehicle, driven by Martha Kent.

However, Martha saw nothing and her truck drives straight through Dawn, who is actually a disembodied spirit. A purple mist swirls and Martha stops the car abruptly. Dawn's spirit has been transferred into Martha's body and possesses her.

Clark arrives home that night to find his mother dancing weirdly to loud pop music, eating ice cream right out of the carton and acting strange and ditzy. As Martha, she says she believes Clark and Lois were together.

Lois and Clark are appalled at the accusation, and Lois thinks Martha is drunk. "Martha" stomps off and Clark offers to drive her to work, but she turns him down and leaves.

"Martha" arrives at the Talon just as Lana comes out of her apartment. "Martha" asks her why she isn't on the decorating committee and when Lana says she's not going, "Martha" says rude things about how Lana thinks she is above it all.

Lana gets upset and turns to go. "Martha" grabs her shoulder and Dawn's spirit jumps from her to Lana.

Pleased with her new form, "Lana" leaves, runs into Clark on the way out and asks him to prom. Clark is sceptical at first, but quickly agrees to go. "Lana" leaves to help decorate and a confused Martha tells Clark she doesn't remember how she got there.

"Lana" arrives at the school and orders the volunteers around. She sees Billy and asks him about his breakup. He says he's glad Dawn isn't around and "Lana" gets upset momentarily, then flirts with him. She tells him to get cleaned up and she will meet him later. Clark arrives at the school shortly afterward and asks Chloe if she's seen Lana.

He tells Chloe about how his mom, then Lana, started acting strange. "Lana" takes a frayed electrical cord and holds it up to the metal lockers in the room. Billy is wet from the shower, standing at the other end, and starts to convulse from electrocution.

Clark super speeds into the locker room. He knocks Billy out of the charge and sees Lana leaving. He goes to approach her, but Dawn's spirit jumps to another student, then another, until she is in the body of her friend Harmony. Lana is left confused as to how she even got to the school, or why she would want to hurt Billy.

Chloe and Lana realize that Billy dumped Dawn and trace the strange behaviour to Martha's last memory — driving near Carlton Gorge. Chloe says Dawn is in a deep coma at Smallville Medical Centre and they guess that she is transferring her spirit.

They go to the hospital to check in with Clark, who is there with Billy, and get an update on Dawn. "Harmony" shows up and sneaks into Dawn's room. A nurse catches "Harmony" in Dawn's room and shortly afterward, she comes out to report that Dawn has died, secretly revealing that she is responsible for the death.

Lois is also at the hospital trying to get treatment for her dog allergies, and the same nurse approaches her and offers to help.

Dawn eventually used this for her own greed as to get everything well prepared for the homecoming senior prom and up her chances to win as prom queen. Being possessed by the spirit of Dawn Stiles, Lois dressed in a pink outfit and persuaded Clark to take her to the prom.

The music stops for the announcement of Prom Queen and Chloe wins! "Lois" hugs her before she goes to accept the tiara, and Dawn's spirit possesses Chloe. After waking up from her trance, Lois thought she was drunk because she was wearing a pink dress she would never be seen wearing otherwise.

Clark realizes that Chloe has been possessed. "Chloe" accepts her crown and begins a strange speech in which she enthusiastically talks about how being Prom Queen is her lifelong dream and how Dawn Stiles really deserves the crown.

When all fails and discovers (in Chloe Sullivan's body) that she is well hated by the student popularity and they all preferred crowned prom queen Chloe over her, Dawn becomes enraged and decides to take deadly possession of the crown for herself and teach the student popularity of Smallville a lesson for not worshiping her more.

After a first ever successful exorcism, her spirit floats aimlessly out of Clark's body and into the sky where Dawn looks down at Clark and Johnathan before she is vanished forever by the heroes completely.

Dawn was bossy, domineering and conceited, earning the contempt of most people in her school. She was also shown to be somewhat lacking in intelligence, despite often claiming herself to be a genius.

Ironically, for all her haughty attitude and self-proclaimed superiority, Dawn seemed to be deeply insecure and longed for approval and acceptance among her peers, making her something of a tragic villain. All these traits of a Narcissistic Personality Disorder. 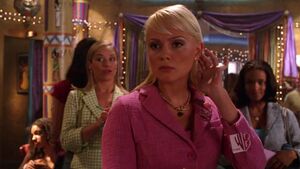 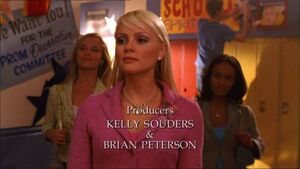 Dawn with her clique walking through the hallways where they bully Lana and Chloe. 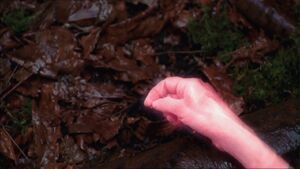 Dawn Stiles gets infected with Kryptonite, giving her the power to jump into people's bodies. 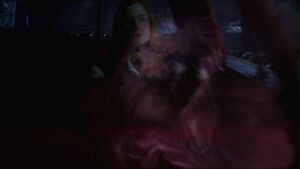 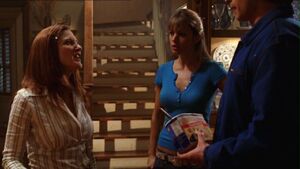 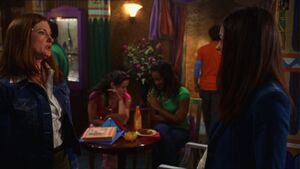 ...and she insults Lana Lang. 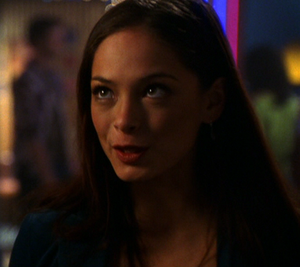 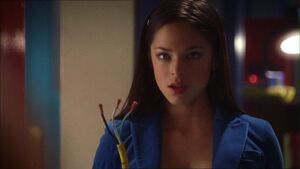 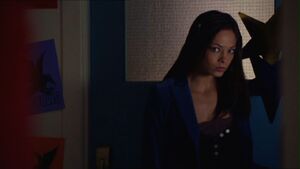 She quickly escapes and jumps into other bodies when Clark shows up. 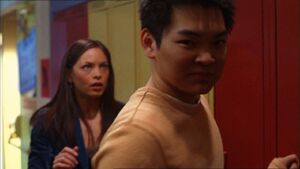 Dawn jumps into another student's body... 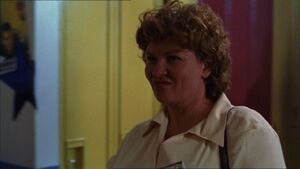 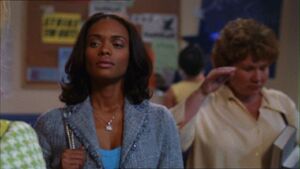 ...and then finally jumps into the body of her friend Harmony. 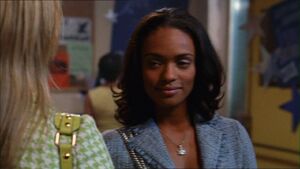 Dawn inside the body of her friend Harmony. 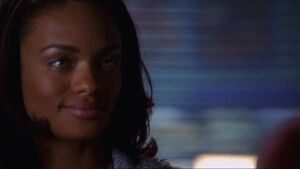 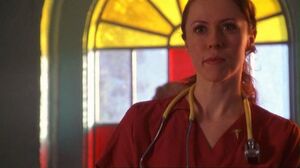 Dawn jumps into a Nurse to get to Lois Lane. 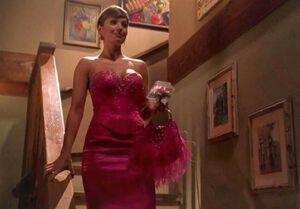 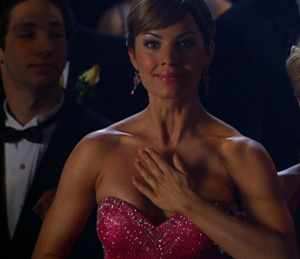 Dawn as Lois Lane at the School prom. 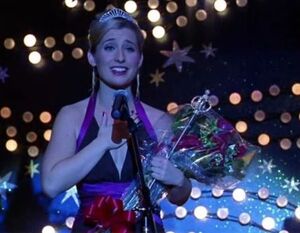 Dawn possesses Chloe to be the Prom Queen. 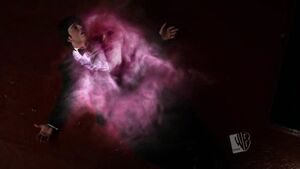 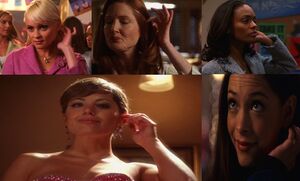 Dawn Stiles playing with her hair in various bodies.