Ruler of the Deez (formerly known as Exxon Valdez)

Preaching to his Smokers.

Get revenge on the Mariner (both failed).

He was portrayed by the late Dennis Hopper, who also played Peter Vollmer in The Twilight Zone, Tom Ripley in The American Friend, Frank Booth in Blue Velvet, President Koopa in Super Mario Bros., Howard Payne in Speed and Victor Drazen in 24.

The captain of the tanker and also the leader of the Smokers is looked up to as a messianic figure, as he has promised to lead the Smokers to the mythical Dryland, and in line with this quasi-religious nature, he is referred to as "Deacon". The Deacon, or "Deac", has an intense hatred of sails, instead preferring the mechanical machines, and believes that his aim to raid atolls is a "crusade". He teaches his men a philosophy of "take and ye shall receive". The Smokers also worship a former historical captain of the tanker, "Saint Joe".

The Deacon's inner circle is well organized and includes a man with medical knowledge, and a man who follows the Deacon around with a ledger and a bowler hat who records for posterity everything that happens and who also informs the Deacon of various statistics he needs to know. The Deacon's second-in-command is a large and imposing man of Scandinavian descent, referred to as "the Nord", who is reminiscent of a Viking. The Nord likes to be in the thick of the action and delights in murder, leading the raids on atolls and also posing as a spy for reconnaissance. Smokers refer to each other as "cousins".

The primary goal of the Smokers in the film is to find an orphan girl named Enola, who as myth states came from the legendary Dryland, and has directions to it on a tattoo placed on her back. What the Deacon plans to do with Dryland is unclear though. In the extended cut, the Deacon claims he wishes to create a "church of eternal growth" for the Smokers.

As the captain of a derelict oil tanker, the Exxon Valdez, and the leader of the Smokers. He wants the map to Dryland and has a number of skirmishes with the Mariner while trying to get Enola. After Helen's actions during a battle with the Smokers results in significant damage to the Mariner's boat, he angrily cuts their hair very short. After this incident, however, the Mariner gradually warms up to them, and teaches Enola to swim.

Helen, convinced that Dryland exists, demands to know where the Mariner finds his dirt. The Mariner, able to breathe underwater, puts her in a diving bell, and swims down to the ruins of Philadelphia. While they are underwater, the Deacon and his Smokers board the boat. The Mariner and Helen escape as the Deacon burns it and captures Enola. Since Helen cannot breathe underwater, the Mariner breathes for the both of them, resulting in an underwater kiss of life. They resurface and board the wreckage of the Mariner's trimaran, where they are later rescued by Gregor. He takes them to a new makeshift atoll where the survivors of the first atoll attack have regrouped.

Using a jet ski, the Mariners chases down the Exxon Valdez and boards it. There, the Deacon is having a celebration, tossing gifts of cigarettes and Smeat to the crew, proclaiming they have found the map to Dryland. After they have all gone below decks to row, the Mariner walks out onto the deck and threatens to drop a flare into the oil reserves unless the Deacon releases Enola. The Deacon, believing that the Mariner is bluffing, refuses. The Mariner drops the flare into the vent leading to the oil reserves.

The ship explodes, and the Mariner escapes with Enola by climbing a rope up to Gregor's balloon. The Deacon, still alive, makes a grab for Enola, but Helen throws a metal object which strikes him in the forehead, causing him to fall into the water. He then pulls out his pistol and shoots at the balloon, hitting one of the lines, causing Enola to fall into the sea. The Deacon and two other Smokers, all on jet skis, converge on Enola. The Mariner ties a rope around his ankle and jumps down to grab Enola, pulling her out of the water just as the jet skis collide and explode. 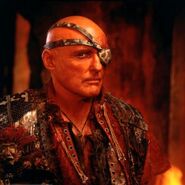 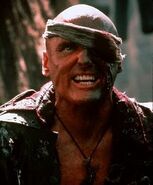 The Deacon with his eye-patch.

The Deacon sharing his "vision" with his people.