Sacrificing victims and bathing in their blood.

Joseph Blackfire, revered by his cultists as Deacon Blackfire, is the main antagonist of the Batman: Arkham Knight Most Wanted mission Lamb to the Slaughter.

He was voiced by Marc Worden, who also played Victor Zaitsev in Vanquish.

Blackfire claimed to be over 100 years old and to be a Native American shaman who was entombed alive after being found guilty of killing a tribal chief and committing heresy. Blackfire claimed the secret to his eternal youth was bathing in buckets of human blood, and he used his charm and powers of manipulation to brainwash an army of devout followers to provide victims for his sacrifices.

After Batman has saved Oracle and returns to the GCPD, he finds that Jack Ryder, who had spent the whole night at the GCPD to be in the middle of the action. By listening to Ryder's tapes, Batman finds out that Ryder was investigating Blackfire's cult and is headed to the Lady of Gotham, because he expects something big to go down there. Upon arriving on the island, Batman sees that Ryder has been captured by Blackfire and his fanatic followers. Ryder has been tied to a table and is about to be sacrificed by Blackfire.

When Batman comes closer, Blackfire spots him and activates the electric fence surrounding him, preventing Batman from approaching him. He orders his followers to attack Batman and dispose of him quickly, as the time of their sacrifice is drawing near. After all enemies are defeated, Batman can use his Remote Electrical Charge to deactivate the electric fence and enter Blackfire's cage through the vents. Having entered the cage, Batman quickly disarms Blackfire and, after the deacon claims that due to his immortality Gotham will be his eventually, knocks him out by smashing his head onto the altar.

Blackfire is then incarcarated at the GCPD. 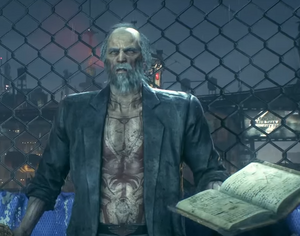 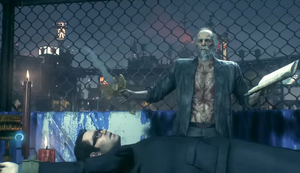 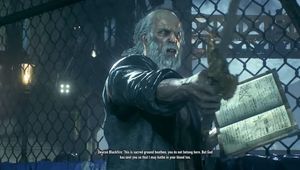 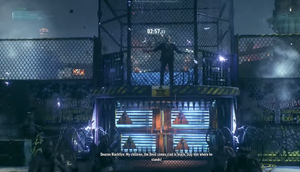 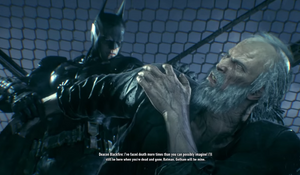 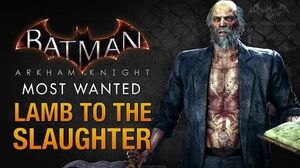