Creator of the "Dopplegangers"

Wipe out or enslave the human race in order to be able to lead the vampires to conquer the world (failed).
Become a vampire god (failed).

Deacon Frost is an extremely powerful and merciless vampire and a villain in the Marvel Comics universe. He is the arch-nemesis of Dhampir/vampire hunter Blade/Eric Brooks and his mother's killer.

Frost was a scientist looking for the key to immortality. For one of his experiments, he kidnapped a young woman in order to inject her with the blood of a recently killed vampire. The girl's fiancé broke into the lab, and Frost and the fiancé had a fight. During this fight, Frost was injected with the blood himself. The result was that Frost became a vampire but due to the unusual method of his becoming a vampire, he was endowed with a unique characteristic. Anyone he turned into a vampire would generate a doppelgänger. He could create an infinite number of doppelgängers by biting each doppelgänger, and they would all be under his mental control. Frost intended to use this ability to contend for the position of Lord of Vampires, a position that was presently owned by Dracula.

Deacon Frost is the vampire responsible for the death of Blade's mother; Blade's initial mission is to exact revenge against his mother's killer. It was also Frost who turned Hannibal King into a vampire. Blade and King, while initially distrusting each other, eventually teamed up to fight Frost's army of Blade and King dopplegangers. The two of them managed to defeat and apparently destroy Frost in his underground hideout, stabbing him twice and leaving his body to be consumed as his hideout exploded.

Many years later, Blade encountered a vampire that called itself Deacon Frost. This vampire had a different appearance and personality to the original Frost, and was later identified as being a doppelgänger. The doppelgänger attempted to summon a powerful demon, only to be devoured by it. In a later one-shot story set in New Orleans, Deacon Frost was encountered yet again, but he appeared as he did in The Tomb of Dracula. He also confirmed that the previous encounter was indeed an imposter, as Blade suspected, who was created using science and magic. Blade and King, with the help of Brother Voodoo, foiled Frost's attempt to gain control of Garwood Industries through Donna Garth (daughter of Simon Garth, the so-called Living Zombie). Frost escaped this encounter vowing revenge. More recently, Frost appeared at the summons of Dracula to defend the Lord of Vampires as he underwent a magical ritual, only to be staked by Blade.

In the comics, Deacon Frost was depicted as a tall white-haired late middle age gentleman with red eyes and possibly being from circa 1860s Germany as judged by his period clothing. His doppelgänger sported an accent and attire that suggested a southern preacher. 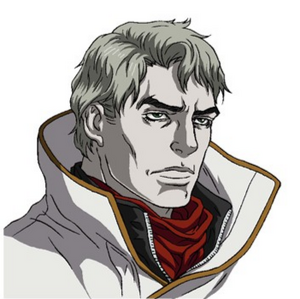