Dead Master is a girl with wavy dark green hair and straight bangs, and neon green eyes. Her outfit is similar to a Gothic Lolita outfit. She wears a black dress and a black bolero; her dress extends down to her thighs and is accented with a white ribbon attached to her waist. Dead Master also wears a pair of leggings and a pair of black pumps. She wears a pair of black gauntlets on each hand. On her head is a pair of long horns which resemble a pair of vertebrae with each tip made out of three tips joined at the end. Dead Master also has a pair of wings which sit low on her back, looking like a thick zigzag. Her weapon of choice is a large scythe named Dead Scythe. Most of the time she is accompanied by two floating skulls, each with glowing cavities, which she uses to attack.

In the OVA, she retains much of her original design. The white undergarment beneath the dress is not shown and the green is not as bright and is hardly present. The sleeves are tight to her arms and is completely black compared to the anime in which the white undergarment is shown again as the sleeve expands then is tied with a ribbon around the wrists to leave a small amount of cloth around the hand. White ribbon is tied on the front right corner above the hemmed bottom directly above the flared bottom. The green ribbons are taken away from around the top of the knees on the black capri and the ribbons surrounding Dead Master’s ankles that are attached to her pumps are not portrayed in the original OVA design. A frilled choker around her throat is also part of the "older" design. In features, her claws are more designed to look like the "vertebrae" horns from atop her head compared to in the anime, in which they are smooth and the nail beds are green. Dead Master's horns and wings are black not green and her hair is also more black and wild. Like all of the "other selves", she has a circular pattern in her eyes.

In the 2012 anime, Dead Master's redesigned appearance, along with Yomi's, are the most notable among all the other characters. Her hair is somewhat less wavy, and wears green glasses, just like Yomi in the anime. She also wears a bridal veil over her head. Her black horns and pair of wings are now bright green. Her claws are much larger with green-colored tips. She still wears a Gothic Lolita-like dress, though it is now more dark green than black. Her sleeves are larger with green frills at the ends, and her skirt is longer and larger with white frills. Her leggings are also frilled at the ends, which are held by green roses. Dead Master also wears cross-laced ankle ribbons, and green-heeled footwear.

De-chan has a similar appearance of Dead Master of Black★Rock Shooter OVA. She has two horns on her head, a black dress, black gloves, and two black shoes. Unlike her OVA and Anime counterpart, De-chan has gentle and cute face.

In the OVA, she is showy and sinister when trying to kill Black★Rock Shooter and shows great skills with her scythe. She makes a large show of threatening, wicked smiles, and while she is quiet, she is silently taunting her enemy. She also makes hissing noises when agitated. She can apparently take over Yomi Takanashi's body when her emotions become similar to the Dead Master's.

Dead's personality is quite childish, carefree and joking. Despite being a Black Shooter, Dead seems to have negative feelings to her job of collecting souls (saying that the purified souls disgusted her). When she fights she shows calm and wit that lets her use the lamentations of her enemies against them. She has a strange attraction to Rock, which is evident whenever she is around.

In the anime, Dead Master seems more sympathetic. She appears to be under the influence of Chariot, and after being freed from this, is captured by Black★Gold Saw, becoming antagonistic towards Black★Rock Shooter after both she and Yomi lose control.

According to her appearance in the Manga Black★Rock-chan, she always play with Rock-chan and she has a good attitude unlike her OVA and Anime counterpart.

She sits on a throne at the beginning of the OVA in her castle, apparently expecting Black★Rock Shooter's appearance. They fight after Black★Rock Shooter extends her hand to her, rejecting the offer to go with her. Making a show of her nature, she tries to make herself threatening to her enemy throughout the battle. She gains an advantage when she manages to trap Black★Rock Shooter in chains, but Black★Rock Shooter gains the strength to break the chains. She makes the same hand gesture, but the Dead Master, again rejecting her, and backing up, starts to fall off of a ledge. Black★Rock Shooter catches her and holds her in an embrace.

Unable to handle this, the Dead Master escapes the body of Yomi Takanashi, whom she had been possessing, and dissolves; the reason is unknown, but it is likely either due to having left Yomi's body or the "affection" having damaged her in some way.

She is seen stalking Rock and Ron for unknown reasons. She later takes an unconscious Rock from the battlefield after fighting the soul of Hanako Nakamura. Dead thanks them for their effort and ate Hanako's soul, which astounded Ron. Dead later wakes up next to Rock in a room and takes her on a tour of the place where purified souls are taken to Heaven. After reaching the area where souls are purified, Dead stole a soul and fled. She led Rock to a dungeon where they kept the souls of those who could not be purified and freed one of them. Rock started a fight, but strange memories flashed through her mind and left her helpless. Dead fights the hostile spirit and defeats the spirit, only to leave to places unknown afterwards.

Dead is later seen harassing a stagnant soul by the name of Kaede, and Rock and Ron confront her and drive her away. They find that instead of being relieved that the ravenous Dead is gone, Kaede has fallen in love with the tainted Black Shooter. Kaede's powers of illusion amaze Rock, and she wishes to see what other things love can do. On cue, Dead reappears to reclaim her prize, claming that the lost soul is "hers".

However, she is surprised when Kaede confesses love to her. Dead immediately reacts with disdain and decides to leave, but is stopped by Rock and thrown at Kaede, resulting in a collision. It is revealed through the collision that Kaede is in fact a girl. Angry and hurt, Kaede traps Dead in an illusory bottle, almost drowning her. Rock rescues her, and Dead discusses with Kaede, and they finally end up kissing. Kaede is devoured by Dead through the kiss, who then leaves, but not before telling Rock to "continue being delicious as you are".

Having died in a car crash in her former life, Dead was told by Ram that if she ate enough souls, she would be able to come back to life and reunite with her fiancée. When she learns this was a lie, she breaks down and becomes a stagnated soul herself.

She comes down and looks and joins Black★Rock Shooter as Chariot is being sucked into the void, but suddenly Black★Gold Saw appears. She saves Chariot and cuts into the ground, creating a fissure that drags Dead Master in, separating her from the others.

Black★Gold Saw apparently holds Dead Master captive, leading to Black★Rock Shooter tracking them both down. Due to Yomi's instability in the real world, Dead Master also goes into turmoil and surrounds herself in chains, eventually summoning a castle and several minions. She then begins to battle Black★Rock Shooter.

Later Strength is shown dragging her body away; what happens to it is not shown in that episode.

It is later revealed she is in the abyss that Chariot was in and seems to begin reawakening to life when Yomi's memories of Mato start to return.

The redesigned Yomi in the 2012 anime 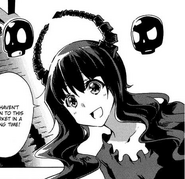 Retrieved from "https://villains.fandom.com/wiki/Dead_Master?oldid=1986925"
Community content is available under CC-BY-SA unless otherwise noted.