Fake Shemp (as credited from the first Evil Dead movie)

Consuming souls of their victims and taking over their bodies.

Overrun the world of the living.

The Deadites (also known as The Evil Dead) are the main antagonistic faction of the Evil Dead series. They are demonic zombies and spirits controlled by the powers of both the Necronomicon Ex-Mortis which is created by the hands of the Dark Ones, and of the Kandarian Demon. They have the power to possess the living and the dead.

The Deadites were released alongside Kandarian Demon when Professor Knowby recited passages from the Necronomicon are recited and chanted out loud. From then on, Ashley "Ash" Williams battled the deadites that are hellbent on taking over the world and killing all living things including humans, where their very first victims are his friends and his sister.

By the events if Ash vs. Evil Dead, Ash recalls being with a recent female acquaintance and opening the Necronomicon when she pushed him to recite some poetry when senses that deadites make their returns. The attack was started from when State Trooper Amanda Fisher and her partner investigate reports of paranormal activity at an old house, but is attacked by the first wave of the Deadites and survived though her partner killed in ensuing fight. At first, he decided to behave normal to avoid unwanted attention, but is finally forced to tell the truth on his friend Pablo after an incident with the Deadite-possessed doll which mutated into a small but dangerous monster which Pablo smashed. Another wave of Deadites attack again, and with him the only one whom know better how to deal with the threat, Ash and his allies goes for another war against the demons.

See: The Taker of Souls

In Evil Dead, Taker of Soul is capable to conjure and control its own Deadite thrall. Unlike Regular Deadites however, these Deadite strains are less comedic, zombie-like, and masochistic in behavior, prone in harming oneself before attacking others. Owing to this, they also quite resilient to injuries before succumbing to injuries.

In general, Deadites have a comedic but sadistic side and they are very dark hearted beings albeit with angry and childish moods. But they are not stupid or clumsy, as each of their minds are connected with a hive mind (the Kandarian Demon who leads them). They are also known for speaking "Engrish" (the grammatically incorrect English) at times.

As the series progresses, they developed strong hatred towards Ash Williams, for him being the Chosen One and therefore, the only known man who endured their even most unpleasant torments (they did managed to mentally scarred him for a time though). This in turn, allowed Ash to hone his skills in combating the dark forces they and Kandarian Demon thrown against him. As arrogant and treacherous they can be, their fearful and cowardly side will surface if anyone get their hands on Kandarian Dagger (the only thing that can effectively kill them) or Necronomicon itself. It's evident that they obsessed more in the Necronomicon-Ex Mortis, as it is the only thing that can summon and control/enslave them.

The Deadites are capable of possessing other people's bodies, and consuming their souls for a hobby or when there just being annoying to the person that read or pressed play on the tape recorder with the words from the Book of the Dead itself, to release the demon spirits from beyond and begin these spirits' possession over the unsuspecting mortals and their hunger for the flesh. Aside from possessing the living, Deadites in spirit forms are capable of tossing around living people as if they are bales of straws, as demonstrated by fog form of their collective intellect Kandarian Demon.

As shown in The Evil Dead and The Evil Dead II, the deadites are capable of reverting their hosts back into their human form as an attempt to trick and lure their victims in addition of levitation and enhanced strength. As creatures of darkness, they are aversive to sunlight, since a particular deadite spirit who possessed Ash at the beginning of The Evil Dead II was forced to release its hold over him. All the fog (which concealed the Kandarian Demon itself) throughout the forest disappeared. Should they possessed the deceased, the Deadites can evolve into a much more powerful, horrifying form.

Aside Kandarian Dagger and sunlight, the most effective method in killing them is by severely damaging their physical form and/or host, typically via. dismemberment, owing to the fact that mutilated corpses are useless for their possession. However, as revealed in season 3 of Ash vs. Evil Dead, when body parts are reattached, Deadites can revive so once dismembered they must stay dismembered. 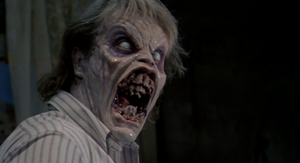 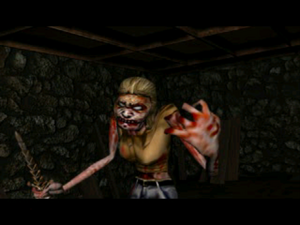 Deadite Annie as seen in Evil Dead: Hail to the King. 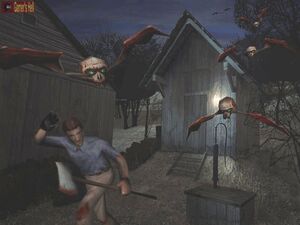 Skullbat Deadite as seen in Evil Dead: Hail to the King. 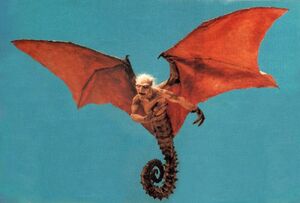