Conquer or destroy the world.

The Deadly Six is a villainous group of 6 Zeti that are the antagonistic group, and the primary antagonists in Sonic Lost World (as Eggman unexpectedly becomes the true antagonist). In Sonic Lost World, Doctor Eggman harnesses the power of the Deadly Six in an attempt to defeat Sonic the Hedgehog and conquer the world. However, the Deadly Six rise up against Eggman and break free, threatening to destroy the world on their own. As a result, Eggman is forced to team up with Sonic in order to stop them for good. 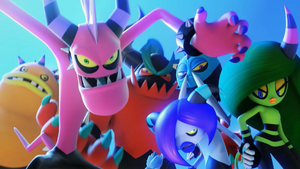 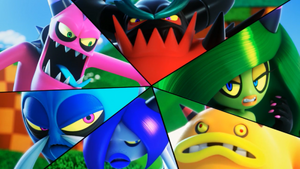 Retrieved from "https://villains.fandom.com/wiki/Deadly_Six?oldid=2193516"
Community content is available under CC-BY-SA unless otherwise noted.