Hanging out with Pinkie Pie.

Wade Winston Wilson, better known as Deadpool, is a major character from Marvel Comics, who also appears as a recurring character from the Rooster Teeth animated webseries DEATH BATTLE. Unlike most combatants that remain in their respective battles and only appear in them, Deadpool frequently uses his ability to break the forth wall by appearing in almost every season of the show to harass Wizard and Boomstick as well as fight in whatever battles they place him in.

Wade Winston Wilson was born and raised in Canada, and grew up to be a mercenary and Special Ops combatant. However, his life changed when he contracted cancer, leading him to leave the woman he loved and end his chemotherapy. One day the Essex Corp offered to cure him, and he agreed, only to be experimented on by Dr. Killbrew and his assistant Ajax. His mutant genes were unlocked and he was infused with Wolverine's healing factor, resulting in him gaining superhuman strength, speed, and reflexes, as well as the ability to regenerate from almost any wound. He became a superhuman mercenary, fighting ninjas, dinosaurs, supervillains, and terrorists while also falling in love with Lady Death and forming a rivalry with Thanos.

In his first battle, Deadpool unexpectedly appears during his introduction. Boomstick is confused, and Wizard explains that Deadpool has an uncanny ability to break the fourth wall. Deadpool begins harassing the two by changing things in the script, showing a comic panel of him naked, vandalizing his opponent Deathstroke's introduction, and belittling them over the result of the "Goku vs. Superman" episode, which makes Boomstick shoot at him.

In the actual fight, Deadpool and Deathstroke target each other to collect the others' bounty. The fight ends up on a highway, where the two fight on top of a semi truck. Deathstroke ends up causing an explosive pileup, and Deadpool sees that Deathstroke has a healing factor as well. He attacks him with a sword made of Carbonadium (which nullifies healing factors), shoots his eye out, then decapitates him and uses the head as a hood ornament.

Deadpool returns to harass Wizard and Boomstick again during his introduction, gloating about his movie appearance and shows off his powers and abilities again. When Wizard and Boomstick tell him that his healing factor has made him cocky, Wizard demonstrates by using a pencil to erase Deadpool, telling Boomstick that he prepared for the next time Deadpool showed up.

In the battle, Deadpool begins fighting Pinkie Pie from My Little Pony until they realize they both can break the forth wall. They escape the video and and go to other DEATH BATTLE episodes, messing with the outcomes and getting in the way of the fights. They then crash an episode of DEATH BATTLE Cast (a podcast featuring the show's creators and producers) for Deadpool to complain to them about making him fight on his birthday. Upon hearing it is his birthday, Pinkie Pie throws a party for him, leading to no deaths and infuriating Wizard and Boomstick.

In the introduction for Thanos, Deadpool appears to mock Thanos and explain why Lady Death chose him. When Boomstick tells him to go away, Deadpool says that they cannot have a season of DEATH BATTLE without him, and Wizard explains that they did; the last one.

During the fight, Deadpool is seen explaining the features of Thanos's throne to Darkseid until Thanos shows up and kills him with the Infinity Gauntlet. When Thanos loses to Darkseid and is trapped in the Omega Sanction and dammed to infinite horrible deaths, Deadpool killing him is among the many ways he dies.

During Lobo's introduction, Boomstick accidentally mentions Deadpool's name, and Deadpool arrives. However, Wizard smashes the screen to get rid of him. Deadpool then parodies the trailer for The Rise of Skywalker by saying that "no one is ever truly gone" before leaving, with Boomstick swearing to kill him one day.

"Deadpool vs. The Mask"

Deadpool returns to battle The Mask, in a battle that Wizard and Boomstick are biased and partial to. They set up the entire fight to kill Deadpool off, and when the battle begins, Deadpool tries using the Continuity Stone to rewrite several pervious battles, such as having Goku kill Superman, Wonder Woman kill Rogue, and Tifa Lockhart kill Yang Xiao Long. However, the stunt uses up the budjet, so Deadpool and the Mask go out gambling and robbing to make the money to continue the fight. After they succeed, the Mask begins easily beating Deadpool, making him have an existential crisis. The Mask wins by blowing Deadpool up with a nuclear bomb, winning the fight. As Wizard and Boomstick are explaining why the Mask won, they are overcome with regret that they put Deadpool in such a one-sided battle. They recieve a note from Deadpool thanking them for entertaining him, and Wiz and Boomstick admit to missing him. However, the Continuity Gem brings Deadpool back, though the Mask is still declared the winner. 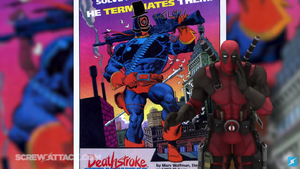 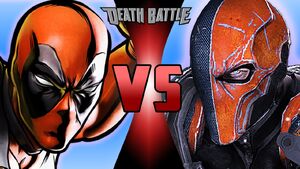 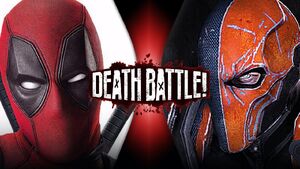 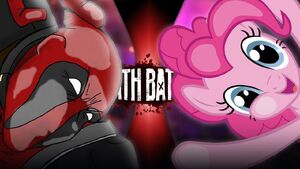 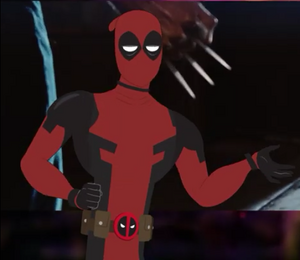 Deadpool's hand-drawn design, which began being used as of "Deadpool vs. The Mask".
Add a photo to this gallery 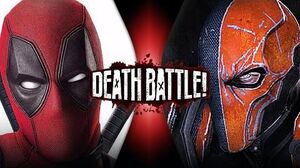 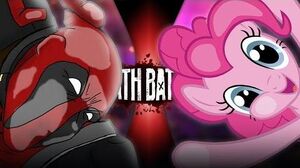 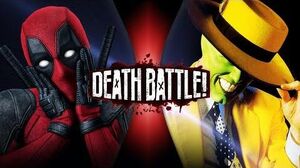 Deadpool VS Mask (Marvel VS Dark Horse) DEATH BATTLE!
Add a photo to this gallery

Retrieved from "https://villains.fandom.com/wiki/Deadpool_(DEATH_BATTLE)?oldid=3535380"
Community content is available under CC-BY-SA unless otherwise noted.