Sergeant Wade "Wadey" Winston Wilson, better known by his alias Deadpool, is an antagonist from the 2010 Marvel video game Spider-Man: Shattered Dimensions. He is an anti-mutant extremist, mercenary, and the host of a lethal television show called Pain Factor. He is from the Ultimate Universe and appears in the Pain Factor stage, which takes place on an oil rig platform series.

He was voiced by Nolan North, who also voiced him in Hulk Vs., as well as The Penguin in the Batman: Arkham series, and Merasmus in Team Fortress 2.

Deadpool was an anti-mutant activist that received cybernetic enhancements. He was a mutant killer that was eventually defeated and presumably killed by Spider-Man and the X-Men. However, after his seeming death, Deadpool regenerated and returned, but now with strange insanity that made him believe he was in a video game (he received the fourth wall awareness that his mainstream counterpart possesses). Still desiring to have the spotlight, Deadpool began his own television show called Pain Factor, which has him put mutants into deadly scenarios to have them compete for their lives.

After the Tablet of Order and Chaos is broken in a battle between the Mainstream Spider-Man and Mysterio, the pieces are scattered across dimensions, with Deadpool obtaining one. In the Ultimate Universe, Deadpool invites his version of Spider-Man to the Pain Factor location (a repurposed oil rig) for the chance to get revenge and kill him, offering the Fragment as a prize for winning.

Spider-Man accepts and goes to be affably greeted by Deadpool. However, when Spider-Man destroys one of the cameras, Deadpool gets upset. He decides to sic his fans on Spider-Man and film it. Spider-Man traverses the rig, taking out armed fans and cameras. Throughout, Deadpool keeps trying to capture good television, including pitting Spider-Man against a hulking henchman named Beauregard, attempting to interview him about his love life and embarrassing moments, and chastising him for beating up his fans. After destroying enough cameras, Deadpool himself comes down to knock Spider-Man out.

Deadpool transports Spider-Man to a smaller platform, where the two fight for the cameras. Deadpool attacks with his blades and bombs and teleports around with his teleportation belt. In the middle of the fight, Deadpool will get a phone call and go away to answer it, sending fans to fight for him. After defeating them, Spider-Man will attack and throw him to the ground. Deadpool calls more henchmen on his side, but Spider-Man defeats them.

Deadpool attempts to flee on a speedboat, and Spider-Man webs the back and holds on. The fight returns to the rig, where Spider-Man has to destroy more cameras and defeat more fans. After destroying the cameras, Deadpool locks Spider-Man in a room full of henchmen while the show goes to commercial. After Spider-Man gets out, Deadpool detonates a mass of explosives underwater, creating a series of massive tidal waves that Spider-Man must quickly swing away from. When one of the waves reaches too high, Spider-Man needs to swing to a ship in the water to avoid the wave, which pushes him to the final platform where Deadpool is waiting.

Deadpool waits inside of a wrestling cage for Spider-Man. Deadpool then calls cut and throws the Fragment to Spider-Man, congratulating him on giving him a good show. However, Spider-Man realizes the Fragment is just a prop, and Deadpool uses the real Fragment on himself, creating two clones of himself. Deadpool and his clones attack with blades, guns, and grenades respectively. After Spider-Man destroys a duplicate, Deadpool will drop bombs into the stage before coming back out. The clones have to be destroyed before Spider-Man can defeat the original. Upon his defeat, the original will drop down unconscious while Spider-Man recovers the Fragment.

Later, in the Carnage level at the Triskelion, Deadpool can be seen in a cell with Electro from the fourth stage.

Deadpool is extravagant, arrogant, and loves being at the center of attention. He longs to produce what he believes is quality entertainment, which is usually dangerous and lethal action taken on others. He is comical and loves to crack jokes and poke fun, though he is not without an affable nature. 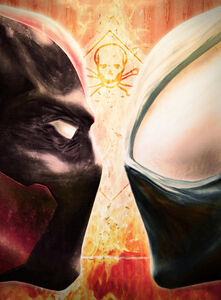 Promotional image of Deadpool squaring off against Ultimate Spider-Man. 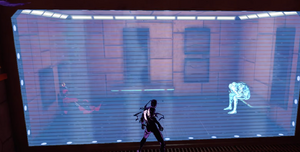 Deadpool in his cell with Electro. 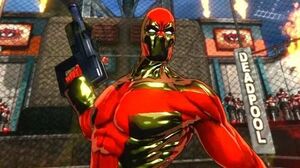