Though frequently having villainous moments, the Earth 616 Deadpool also has moments of genuine heroism and his antics are often played for comedy rather than being taken seriously. The Ultimate Marvel universe (Earth 1610) version of the character, on the other hand, is a much more sinister and sadistic individual, hunting and killing mutants on live television for the "crime" of simply being mutants.

Ultimate Deadpool first appears in the pages of Ultimate Spider-Man where he and his mechanically modified Reavers kidnap the X-Men, also kidnapping Spider-Man due to his visiting the X-Mansion at the time. Taking them to the island of Genosha, Deadpool and his Reavers proceed to hunt them on live TV for sport, to the joy of anti-mutant viewers everywhere. Forced to flee from attacking Reavers, the X-Men ultimately manage to unmask Deadpool, who uses his shapeshifting to trick them into thinking that he's Professor X in disguise. Though Deadpool proves to be a formidable and tenacious fighter, he is ultimately defeated by Kitty Pryde when she phases through him and sabotages his circuits. Though believed killed, Deadpool is shown at the end of the story to have in fact survived, glaring at the X-Men as they fly away while holding his damaged mask.

He later appears in the video game Spider-Man Shattered Dimensions, his personality now noticeably more in line with his Earth 616 counterpart, albeit also still malevolent. Despite this, he is shown to be more of a comedic villain, as opposed to the unsympathetic monster he was in the comics.

He was eventually stabbed to death by Earth 616 Deadpool during the events of Deadpool Kills Deadpool. 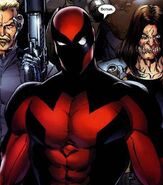 Ultimate Deadpool as he appears in Spider-Man Shattered Dimensions
Add a photo to this gallery
Retrieved from "https://villains.fandom.com/wiki/Deadpool_(Ultimate_Marvel)?oldid=2589986"
Community content is available under CC-BY-SA unless otherwise noted.