Military experience
Able to redirect his shots via ricochet, reaching trajectories normally impossible for most firearms
Among the best sharpshooters in the world

Getting money by assassinating targets.

Kill all targets in Arkham City appointed by Hugo Strange

Floyd Lawton, also known as Deadshot, is a recurring antagonist in the Batman: Arkham videogame series. He is a mercenary and one of the oldest foes of Batman. He is considered the world's deadliest assassin (possibly just behind Deathstroke) and never misses a shot, especially with his pair of silenced, wrist-mounted 9mm cannons.

Deadshot disdains himself almost as much as his targets; several prison psychologists have diagnosed him with "suicidal tendencies". Prior to his encounter with Batman, he had six counts of murder of the first degree, including the assassination of a government official, was potentially suffering from clinical depression, and is 27 at the time he first encountered Batman.

In the games, he is voiced by Chris Cox, while in Assault on Arkham, he is voiced by Neal McDonough, who has also portrayed Damien Darhk in the Arrowverse, Jay Hamilton in Walking Tall, Jon Forster in 88 Minutes, Jack Horton in Red 2, Vincent Sofel in Paul Blart Mall Cop 2, M. Bison in Street Fighter: Legend of Chun-Li, William Birkin in Resident Evil : Welcome to Racoon City and voiced Damian Wayne in Injustice: Gods Among Us.

Being one of the eight assassins hired by Black Mask (Joker) to be hired to go after Batman, Deadshot initially attempted to kill him with a Sniper round, also interfering with Deathstroke's assassination attempted on the Caped Crusader. He eventually tried to finish Batman off by shooting off a crane cable holding a cargo container up from the intention of having Batman crushed under it, although the vigilante managed to escape into the night. After Batman managed to escape Deadshot, he found the sniper round.

Deadshot attempted to kill his target again by shooting down a Police Helicopter on Christmas Eve, in order to get his attention. In the process, he also killed a cop who aimed a gun at Batman by ricocheting the shot off of him and onto the Helicopter. He also carved in the expelled casing his frequency, anticipating that Batman would trace him down as the shooter. After finding out Deadshot was behind this, Batman hacked into his radio frequency and Deadshot told him to confront him at the Gotham City's Merchant Bank, also revealing he has a hostage with him and that he has "a very itchy trigger finger" in order to ensure Batman does not back out on facing him.

At the Bank, Batman confronted Deadshot and his henchmen while avoiding his ricochet shots. After defeating him, Deadshot accepts his defeat and asks Batman to give him a swift death, but the Dark Knight refuses to take a life and leaves the defeated assassin to be arrested.

After Batman captured Riddler and invoking Priority Ultraviolet, Amanda Waller captured Deadshot with other criminals (Black Spider, Captain Boomerang, Harley Quinn, KGBeast, Killer Frost and King Shark) for the Suicide Squad. Their mission is to break into Arkham and recover a thumbdrive in the Riddler's cane; while in Waller's employ, Riddler copied information on the squad to make it public knowledge. She forces compliance by threatening to detonate nano-bombs implanted in their necks.

Later, the Squad found out that Waller lied to them and the real task is (which was give only to Killer Frost) to kill Riddler. However, they didn't kill him, because of his offer to help them to detonate bombs in their necks. It worked for all, except of King Shark and Black Spider. Then Batman appeared and started to interrogate Deadshot why are they here, but was interrupted by Joker. After that, Suicide Squad divided and only Deadshot managed to escape from Arkham by the helicopter.

He thought that everything is already behind, before Joker and Harley Quinn showed up and attacked him. Batman followed them in the Batwing, ending up crashing the helicopter into a building. Batman knocked out Harley and disarmed the bomb. At the same time, Joker and Deadshot fought each other as Joker was not pleased with Deadshot touching his "property" - Harley. Badly beaten, Deadshot managed to pin Joker to the inside of the helicopter as it crashed to the ground.

Batman later meet with Waller, warning her to discontinue the Suicide Squad program. The moment Batman leaved, Waller found a laser pointing at her, which was coming from Deadshot's snipergun. Now free and reunited with his daughter, Deadshot wanted to get a revenge on Waller. The movie ended before he pulls the trigger.

Deadshot first appeared as one of the regular inmates at Arkham City, a TYGER guard ordered him to move out the way so Bruce Wayne can come through. Before moving, Floyd threatened Bruce as he said is on his Hit List.

During the events of Arkham City, a Political Prisoner pleaded for help on a Tower, so Batman came to discover what's happening. Before he could talk any further, the prisoner was shot dead by a sniper round. Batman investigated this and eventually found out Deadshot was behind the assassinations. While Batman was roaming around Arkham City, two more Political Prisoners were killed by Deadshot. Batman eventually found all of his targets: Jack Ryder, Bruce Wayne and Batman, and that Hugo Strange hired him to kill them all. Batman rescued Ryder before he was killed and angered Deadshot as he claims he never misses a shot, the enraged killer then faces off against Batman himself.

Batman goes in behind and takes down the hitman of Arkham City's Warden. After defeating him, Deadshot is imprisoned in a non-operating train car by the Dark Knight.

It is revealed that after Protocol 10 and the events of Arkham City, the GCPD was forced to let Deadshot go, however they made sure that he left without his weapons. His wrist guns and his sniper rifle can be found in a case in the evidence room of the GCPD. Additionally, a magazine can be found in one of Stagg's airships, revealing that after having been saved by Batman Jack Rider took the credit for Deadshot's defeat.

Lawton was known for his reckless ways, he had earned an infamous reputation as a marksman and earned the title as "the World's Greatest Assassin" more than once. He was known for laying out complicated traps while trying to snare his victims however as his career as an assassin continued he became much more sloppy such as leaving his equipment and clues for Batman to find them across Arkham City. One could also say that this isn't because he is reckless, but that he needs a challenge.

Lawton was also insecure about his past, how he accidentally murdered his brother while trying to fend off his abusive father, developing a chronic mental health disorder including numerous suicidal tendencies, even urging Batman to kill him when he was at his mercy (unaware that Batman didn't kill by then). This, combined with him leaving his equipment behind, indicates a lack of regard for his own life like his comic counterpart.

One of the few things that Deadshot actually cares about is his daughter Zoe Lawton. He is willing to do anything to get her back, even working for criminals or corrupt officials like Amanda Waller. This makes him one of the more sympathetic bounty hunters that Batman confronted. 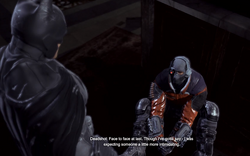 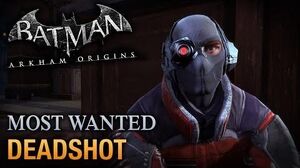 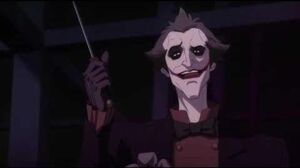 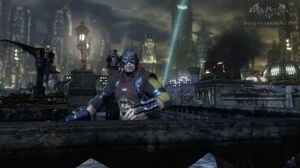 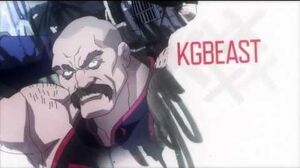