To defeat the Hero and prevent them from saving Samuel (under Wilfre's influence, failed)

Deadwood is a big, tall tree who is the second boss of the 2007 DS game Drawn to Life.

He is fought in a big, secluded forest. He is a unique boss in that the Hero doesn't go through an entire stage to reach him, and there are two parts to the battle. The first part takes place outside of Deadwood, where attacks invole sending out Shadow walker and Shadow bats at the Hero and growling to temporarily stun them.

To defeat him the first time, the Hero must look for his weak points which are little pinecones with eyeballs and a mouth then shoot them with the Acornblaster that the creator (the player) designed. The Hero then has to shoot these three times, then he'll growl to try to stun the Hero.

Once Deadwood is weakened, he will open his big mouth which the Hero will then enter. This all leads to the second part of the battle which is now inside Deadwood.

The strategy for this part is similar to outside Deadwood except the Hero's target is a moving lizard-like shadow whose attacks are: coming straight at the Hero, sticking shadow roots that somewhat line the inside of the tree, and then pounding the inside of the tree. Once the shadow is defeated, Deadwood will thank the Hero for ridding him of the shadow that had been corrupting him and after that, a cage will fall from inside the tree. The Raposa in this cage is known as Samuel. 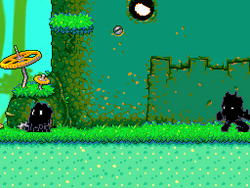 Deadwood summoning Shadow walkers
Add a photo to this gallery
Retrieved from "https://villains.fandom.com/wiki/Deadwood?oldid=2052705"
Community content is available under CC-BY-SA unless otherwise noted.