Observing his demons slaughter humans in the Sentinel Prime arena.

Successfully have the demons invade Earth

Deag Grav is the secondary antagonist of the 2020 video game Doom Eternal. He is a Hell Priest and one of the three coordinating the demonic invasion of Earth at the behest of the Khan Maykr.

Deag Grav was originally part of the sacred Order of the Deag. He first appeared chronologically with Deag Ranak when their guards found the weakened yet enraged Doomguy to be sent into the arena. Praising his blood lust, Khan Maykr later ordered him to fetch Doomguy so she can be aware of the demons.

Sometime after this, he was eventually tainted by Argent and desire for power, seeking prosperity for the Maykrs. Getting access to the Wraiths through an exchange to revive one of the Night Sentinels' dead child, Deag Grav and his goons used their essence to gain power before absorbing the Night Sentinel's dimension. He then resurrected the dead child as the Icon of Sin. Overseeing Sentinel Prime, Deag also favored using the arena to have humans fight in games against demons, both for fun and to keep the populace happy.

Overseeing Earth's invasion, Deag Grav and Deag Ranak are first seen doing a ritual to help assist demonic forces. After Doomguy reveals Deag Nilox's demise, Deag Grav threatened the hero with his end before being warped away before the marine could finish him off.

After some time and Deag Ranak's slaying, Doomguy reached Sentinel Prime with the help of Samuel Hayden, arriving at the arena where Deag Grav was. Warning him that his death would cause the Night Sentinels to betray him, he summoned his Gladiator to defeat Doomguy but to no avail. As Doomguy obtained the medallion required to weaken the sage, Deag Grav bragged that his demise would not save the Earth before his head was blown off with Doomguy's Super Shotgun. His Night Sentinels become aggressive to the player after this, forcing Doomguy to retreat. 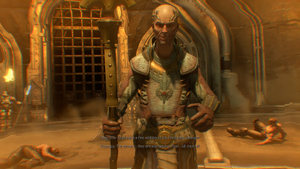 Grav when he was still human, complementing Doomguy's success in his arena. 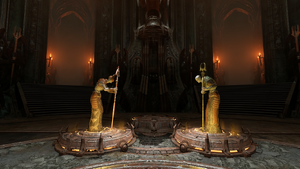 Ranak and Grav conducting a ritual for the Khan Maykr. 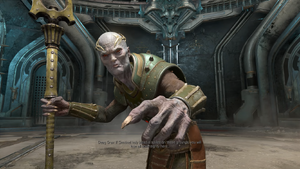 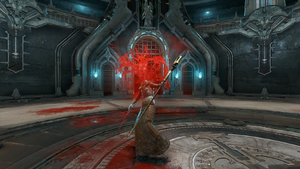 Grav's demise.
Add a photo to this gallery

Retrieved from "https://villains.fandom.com/wiki/Deag_Grav?oldid=4328291"
Community content is available under CC-BY-SA unless otherwise noted.