Kidnapping people and harvesting their blood.

Successfully have the demons invade Earth.

Deag Nilox is a minor antagonist of the 2020 video game Doom Eternal. He is a Hell Priest and one of the three coordinating the demonic invasion of Earth at the behest of the Khan Maykr.

Along with Ranak and Grav, Nilox was one of the three high Sentinel priests from Argent D'Nur, and the first to discover a gateway to Hell. From the gateway, Nilox was corrupted by its influences and was tainted by Argent. Allying with the Maykrs, Nilox and the other Deags used their essence to gain power before absorbing the Night Sentinel's dimension. He since followed the Khan Maykr in her plan to unleash the demons of Hell to destroy humanity and take over the Earth.

At some point in the past, Nilox and Ranak were presented with a wounded Doom Slayer found by the Sentinels in the valley outside the castle walls. Noticing he still had energy despite his wounds, they ordered the Sentinels to take him to the arena where he will be judged like the others.

Becoming a Hell Priest, Nilox was entitled to observe the operation, ensuring that the invasion succeeds. Taking possession of a Hell Barge, he operates on the planet's surface, occasionally snatching civilians and harvests their blood for his occult rituals.

Nilox is the first of the Hell Priests targeted by Doomguy, storming into his fortress in the hellscape of New York City. Quickly making his way into the inner sanctum of the fortress, Doomguy finds Nilox and immediately incapacitates him by squeezing his neck. Nilox tells Doomguy that he cannot be killed as his soul remains guarded. However, Doomguy uses a special holy medallion that nullified the protection and allowed him to tear Nilox's head off, which he later uses to reach the other Hell Priests and taunt them, ruining their ritual for the Khan Maykr.

Doomguy later preserves Nilox's head as a trophy in the Fortress of Doom. 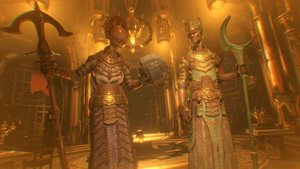 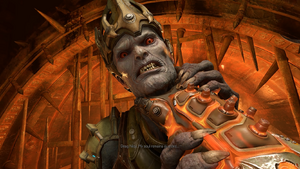 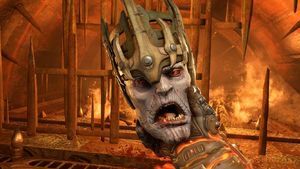 Nilox's demise.
Add a photo to this gallery

Retrieved from "https://villains.fandom.com/wiki/Deag_Nilox?oldid=4318142"
Community content is available under CC-BY-SA unless otherwise noted.