Harvest the Crimson Energy from fallen Wizards to enter Meteor G's server, and use its power to control the earth (failed).

The Dealer is the main antagonistic faction in Mega Man Star Force 3. It is a criminal organization that is led by wicked crime lord and former scientist Mr. King, their main objective is largely based around harnessing the power of Meteor G, by corrupting Wizards using Noise Cards.

The King Foundation was a front for Dealer.

As uncovered by Queen Tia and Jack, Mr. King, who is likewise an open figure because of the outstanding King Foundation that fills in as a orphanage. Its genuine nature were, be that as it may, unmistakably noxious and the establishment was in reality an exterior, for it in certainty served to raise and utilize potential henchmen in crime for Mr. King, which were for the most part kids and were conveyed in various missions, from which it is realized that no one at any point returned alive, aside from Tia and Jack.

Mr. King was approached by Heartless, a brilliant researcher who upheld him on the majority of his objectives filling in as his right-hand lady, alongside another a new member of Dealer, Joker. A.C. Eos was additionally a known part and had an relationship with Tia. But he became disgusted at the organization and left. During this time Mr. King came into the ownership of Mu Technology.

With the new headways in innovation with Wizards, a reaction conceived from it, was Noise much the same as a Bug-like marvel that could make powerful damage present day innovation, be that as it may, despite the fact that Wizards were continually discharging Noise, it was in little amounts that were safe. Merchant made utilization of exceptional innovation that could intensify such Noise inside Wizards and transform them into a furor and over the top state. This was a piece of their plans for when such Wizards battled as far as possible, they would discharge Crimson, a grouped type of Noise that was significantly more unsafe than customary Noise. Mr. King would subsequently arrange his minions to transform Wizards into Noise Wizards and wreak devastation among the populace, so they would discharge Crimson that would be reaped for their plans, which was to control Meteor G, a substantial space rock that was an unadulterated centralization of Noise, that was moving toward Earth, which on the off chance that it crashlanded could make genuine damage the entire planet, and along these lines on the off chance that they could control it, they could have Earth in their grasp.

To corrupt Wizards and harvest Crimson, Tia and Jack were sent into Echo Ridge and acted like another educator and understudy, individually. This enabled them to sneak undetected while tainting wizards, for Mega Man to battle and thrashing to gather Crimson. The primary realized that Wizard will generally be contaminated was, who moved toward becoming Spade Magnes, a fearsome Wizard with attractive forces who controlled a school-made rocket that could do genuine damage to Echo Ridge, yet was crushed by Mega Man and its Crimson was collected.

Later on at WGB Studios, Jack and Tia would utilize a Noise Card on Bud Bison, who encapsulated Taurus and caused Taurus Fire to rise out of control. Mega Man vanquished him, and Taurus turned into Bud's Wizard. Not content with just this, Jack contaminated Ice, who progressed toward becoming Diamond Ice, who could solidify things, even in reality. Mega Man had defeated her, yet, the Crimson from the fight was gathered by Dealer.

On an outing to Alohaha, by Echo Ridge's school. Tia and Jack met and tainted the place's gatekeeper, Strong, an amazing Wizard who was additionally in change of the EM Environmental System, getting to be Club Strong, a huge and fierce Wizard who was causing extreme breaking down into the System. It was crushed by Mega Man and its Crimson collected by Tia and Jack. This time, in any case, Mega Man pursued its lead towards them and the both Tia and Jack uncovered their actual personalities and that of their accomplices Virgo and Corvus. Jack who EM Wave Changes into Jack Corvus battles Mega Man, abandoning him depleted, at that point Joker, an individual from Dealer shows up and reports orders from Mr. King for both of them to withdraw and not battle Mega Man yet. Luna seems searching for Geo, however sadly for her and the others, Joker utilizes his mark assault on her (Dread Lazer) and deleting her, spreading her EM Waves around.

Mega Man, upon guidance from Ace, is informed that Luna can be brought back if her parts are gathered, which he does. Be that as it may, Tia was driving a full-strike assault on WAZA, utilizing a substantial armed force of Omega-Xis clones. Mega Man along the Satella Police were fit for purchasing enough time, for the Noise Jammer to be initiated and wipe the clones. Seeing her assault fizzled, Tia chooses to assault herself and progresses toward becoming Queen Virgo, battling Ace who EM Wave Changes into Acid Ace. In any case, the method is as various as deadly in Ace's cases, which puts an incredible strain on him, which compels him to change again into human shape, while uncovering his past and that he needs Tia to leave the association. Super Man battles and thrashings Queen Virgo and she's captured.

After knowing about this, her sibling Jack, ends up angry, and not just ignores Mr. King yet arranges his very own full attack at Echo Ridge by utilizing a lot of Noise and Noised Wizards. Jack moves toward becoming Jack Corvus and leads the assault, and is slowed down quickly by Wolf Woods. Mega Man and Rogue coordinate for a short time, before Rogue fights Mega Man and is crushed. Mega Man along Luna and the rest, endeavor to prevail upon Jack, however without any result, driving Mega Man to battle and annihilation Jack Corvus.

From that point forward, Mega Man started searching for intimations in regards to the Noise Wizards and Dealer. Be that as it may, Joker shows up and corrupts Acid Ace, who transforms into Black Acid Ace. Mega Man battles him before Ace comes back to typical from fatigue. With all that could possibly be needed capacity to control Meteor G, Mr. King chooses to release its capacity, catching zones, for example, WGB Studios and WAZA HQ into epic groups of Noise.

After this assault and with brief period to save, Satella Police chooses to strike Dealer's Base, and discover it is an enormous Crimson Factory. They achieve the base's primary room, yet Joker controls Ace yet again and utilizes him to fight Mega Man. He recaptures his faculties however thumps Mega Man out and continues to battle himself. Mega Man recovers cognizance and pursues and discovers Ace vanquished. Mr. King at that point uncovers Joker is in truth his Wizard and transforms him into Dread Joker. Uber Man battles and annihilations him, however Tia and Jack show up too and face Mr. King. He arranges Dread Joker to self-destruct while he clears out. Not with standing, Ace transforms into Acid Ace and can confine the blast by relinquishing himself, before revealing to Tia regardless he adores her. Amid this time, Heartless uncovers herself as a covert operative for WAZA.

Heartless would send Mega Man the area of Dealer's Orbital Base from where they were controlling Meteor G and in the long run uncovers Meteor G is being slowed down by her and Kelvin Stelar, Geo's dad. Tia and Jack show up and transparently double-cross Mr. King, yet he traps them utilizing wave ringouts that keep them from moving or EM Wave Changing. Cutthroat anyway sells out Mr. King and releases Noise upon Mr. King, apparently slaughtering him. Tia and Jack free themselves, and after that set Meteor G in course to back to Earth, which would pulverize all innovation and 80% of human populace, as their requital for their past, as they uncover they were the princess and sovereign of a country with high EM Wave Change, however was gotten in war by neighbor nations that needed it for themselves, and later were selected by Mr. King.

By this time, Dealer generally stop to work as an association, as Tia and Jack act by their own plan, Heartless was in reality a WAZA spy, Joker was erased and Mr. King was trusted dead. Those occasions and the way that Mal Wizards that worked for Dealer were cheered by their accomplishments yet crippled by the loss of their Leaders and their objection to following Jack and Tia, adequately started the finish of Dealer as a gathering, yet not of their activities, as Meteor G was as yet a risk to Earth, yet on account of Heartless and Kelvin, they could slow down the space rock from 12 hours to 24 hours before effect. This gave all that could possibly be needed time for WAZA to set up a counter-measure and send Mega Man into Meteor G, as he was very impervious to Noise and was the just a single fit for doing as such.

Inside Meteor G, Mega Man battles duplicates of recently Noised Wizards, for example, Spade Magnes, Diamond Ice and Club Strong, yet they were altogether vanquished. Mega Man experiences Tia and Jack, and furthermore crushes them in their EM Wave Forms. After attempting to prevail upon them Jack, identifies with Mega Man, and converses with his sister out of requital, as they are in certainty doing likewise they endured years prior, and they would just annihilate rather than make something better. Virgo and Corvus wound up apprehensive of detainment and turned on their accomplices, be that as it may, they were deleted by Rogue.

Mwga Man goes towards Meteor G's center where he discovers his dad. Before they can accomplish something to Meteor G, Mr. King seems alive and as an EM Being. He chooses that since Earth could never again be his, he would preferably annihilate it. For such reason, he intertwines with Meteor G's center and turns into the gigantic Crimson Dragon, a ground-breaking Crimson monster, who assimilates Kelvin. Mr. King insults Mega Man that he can't hurt his dad, however he stands up, and battles by his dad's past demand. Mega Man battles and quickly crushes the Crimson Dragon, yet the mammoth still has quality and assaults Mega Man. Mega Man is debilitated, yet while oblivious, Mega Man meets Ace, who was as far as anyone knows killed alongside Joker and the Dealer base, gives a discourse to him, and restored quality, Mega Man stands up and battles the monster. Utilizing the full intensity of Noise, Mega Man becomes Black Ace or Red Joker (depending upon the adaptation), and releases an amazing Noise Force Big Bang assault, Black End Galaxy or Red Gaia Eraser, decimating the Crimson Dragon, Meteor G and out along these lines putting a conclusive end to both Dealer and their activities for good.

One of the official arts of Mega Man Star Force 3. 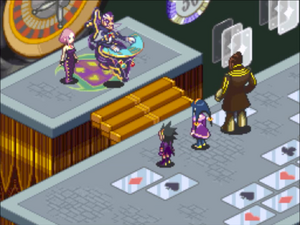 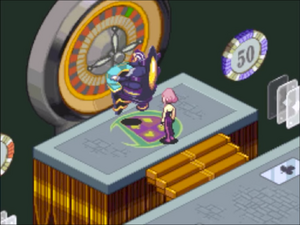 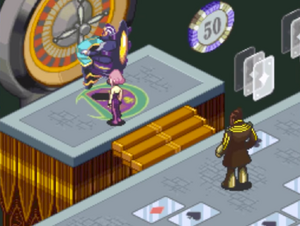 Mr. King ordering Joker to watch over Tia and Jack. 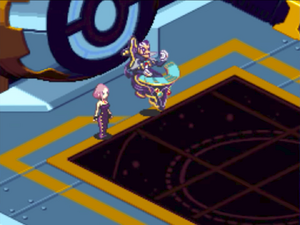 Mr. King and Heartless at the Orbital base. 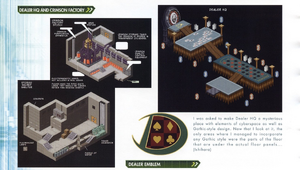 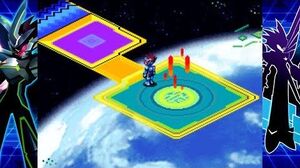 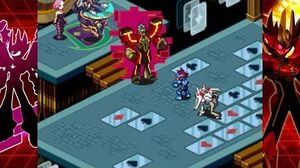 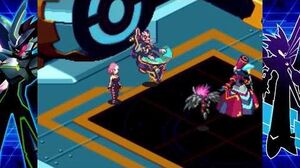 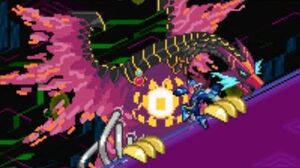