Bullying Crowley (both formerly).
Doing whatever he wants.

Spread "death and destruction for his own sake" failed)

Dean Winchester is one of the two main protagonists, along with his brother Sam, of the television series Supernatural. Though one of the two heroes of the show Dean's actions have gradually become darker, ruthless, and morally questionable, though usually for good reason i.e. misunderstandings or mystical influence. He served as the secondary antagonist of Season 10.

An alternative version of Demon Dean makes a cameo appearance in season 15.

He is portrayed by Jensen Ackles, who also portrays Tom Hanniger in the 2009 horror film, My Bloody Valentine, Jason Teague in Smallville and voices Jason Todd in Batman: Under the Red Hood.

In Season 9, Dean receives the Mark of Cain from Cain himself, in order to be able to use the First Blade to kill Abaddon. However, both the Mark and the First Blade begin to corrupt him, making him aggressive and slowly crueler and more brutal; Dean gets more and more tempted to kill without need while also being far more unpleasent towards those around him.

In the Season 9 finale "Do You Believe in Miracles?", Dean attempts to use the First Blade to kill Metatron, who overpowers him and stabs him in the heart with an angel blade. Soon after, Dean dies from his wound, only to later come back to life as a demon due to the Mark of Cain. The transformation has a terrible effect on Dean, completely inverting his personality, turning him arrogant, selfish, cruel, and hedonistic.

In the Season 10 premiere "Black", Dean has spent the past few weeks having a good time with Crowley, who proposes they revamp Hell. However, Dean doesn't care for Crowley's wishes and is instead enjoying his new lifestyle. He still kills two supporters of Abaddon (it turns out that Crowley manipulated the two demons to confront Dean, as he knew Dean needed to kill regularly or the Mark's effects would consume him) and starts a mostly physical relationship with Anne Marie, a waitress at one of the roadhouses he and Crowley are staying at. Upon seeing her ex bothering her, Dean marches over, beats the man to a bloody pulp, and tells him never to come back. Crowley keeps approaching him, hoping to work with Dean, but Dean is uninterested. Crowley also tells him that Dean's brother Sam has found them and is coming; as such, they decide to leave soon.

Later, after drinking far too much, Dean tries again with Anne Marie, however, she has, by this point, seen he doesn't care for her and just enjoys the sex. Seeing this isn't going anywhere, Dean drops the "nice guy" act and instead shames and humiliates Anne Marie for sleeping with him, leaving her in tears. He then leaves, only to get a call from Cole Trenton, who is pursuing him. Cole tells Dean that he has Sam and tells him to meet him or he will kill Sam; Dean, however, tells Cole to go ahead and kill Sam, not caring about Sam any longer, but warns that, because he annoyed him, Dean will kill Cole when they meet.

In "Reichenbach", Dean goes to another strip club, where he tries to fondle a stripper, drawing the attention of a bouncer who tries to intervene, only for Dean to effortlessly overpower him and beat him senseless, breaking his arm in the process. Upon leaving the strip club, Dean almost attacks several teenagers who pushed past him and called him "Grandpa." Crowley arrives, pointing out that Dean has to start killing or the rage will consume him. As such, he proposes that Dean works for him, acting as a collector to kill people whom others want dead in demonic deals.

Dean agrees and goes to confront an adulterous housewife whose husband, Lester, has made a deal for her to die so he won't lose anything in the divorce. He is about to enter her home, only to find Lester watching. Dean goes to talk to him, revealing himself, and then criticizes him for actually being here when his wife is about to be murdered, calling him a loser for letting this happen (noting that the wife is a lot hotter than he is) and then correctly guesses he cheated first. Lester tries to justify it, partially through sexism; Dean, however, just hits him. When Lester tells him bluntly to do the job, Dean kills him.

Dean returns to Crowley, who's furious to learn that he didn't kill the right person, as that means Crowley won't get the soul. However, Dean casually reveals he doesn't care and isn't interested in working for Crowley. Crowley tries to order him down, but Dean instead turns on Crowley, casually knocking him to the ground. As Dean is a more powerful demon than he is, Crowley is forced to back down, unable to do anything in response. Dean then tells Crowley he'll turn up when he needs to kill, but apart from that, he's not interested in anything else.

Realizing the danger he is in, Crowley sells Dean's location out to Sam; for the price, he will get the First Blade when Sam captures him (to stop Dean from using it to kill Crowley). Sam arrives just as Dean begins to explore his demonic powers and tries to talk Dean into leaving with him, but Dean dismisses his brother's words and reveals he doesn't want to be cured; he wants to stay in this lifestyle and threatens to kill Sam if he bothers him. The brothers are interrupted by Cole launching a smoke grenade in through the window; although it causes Sam to choke, it simply lets Dean know that Cole has arrived.

Dean confronts Cole and mocks the man's idea that Dean should remember him. When Cole reveals that Dean murdered his father, Dean brushes it off, saying he killed lots of people. Cole responds by telling him that he has trained his whole life to kill Dean and attacks. Dean, however, casually takes him on. Cole refuses to give up and manages to wound Dean, but Dean overpowers him, effortlessly healing his wound before revealing to Cole his demonic nature and beating him to a pulp. However, he decides not to kill Cole. However, just as Dean is leaving, Sam manages to catch him by surprise and empties a whole bottle of holy water at Dean, stunning him long enough for Sam to restrain Dean using enchanted handcuffs.

Sam then gives the First Blade to Crowley and takes Dean back to the Bunker to begin the process of turning him human again. On the way back, Sam reveals his belief that Dean is not so far gone after all, as he didn't kill Cole. Dean, however, laughs off the idea, saying it was mercy and that leaving Cole alive knowing he had failed his one chance at killing the man who killed his father was far worse than any death. He then reveals that, as soon as he escapes, he will kill Sam.

In "Soul Survivor", Dean is kept in the Men of Letters' Bunker, bound to a chair within a devil's trap to prevent him from escaping. Sam begins injecting Dean with sanctified human blood in an effort to restore Dean's humanity. The treatment appears to have an effect on Dean, though Dean insists he doesn't want to be cured. Dean taunts Sam about the lengths he went to to try and find him, namely manipulating Lester into summoning a Crossroads Demon so he (Sam) could interrogate the demon as to Dean and Crowley's whereabouts. Dean goes on to say very cruel things to his brother, even telling Sam he's tired of always looking after him and stating their mother wouldn't have died if it hadn't been for Sam.

Dean eventually gets free (thanks to the human blood starting to turn him human again) and pursues Sam throughout the Bunker. He corners Sam and attempts to attack him with a hammer, but Sam holds Ruby's knife to his throat. Sam backs down and Castiel arrives in time to restrain Dean. Sam and Castiel put Dean back in captivity, and moments later, Dean returns to his normal human self.

It is revealed that God had created an alternative universe in which another version of Dean also bore the Mark of Cain and became a demon. In a vision by Sam (who ended up sharing a link with God's mind), he saw this universe in which another version of himself approached Demon Dean in their bunker and was going to kill him. However, this Demon Dean got the upper hand and killed Sam. This was another one of God/Chuck's "drafts", as he liked to create other universes and play around with other versions of Sam and Dean.

This version of Demon Dean would later be killed by God when God destroyed his universe, as God began wiping out the multiverse.

After being transformed into a Knight of Hell by the Mark of Cain and dean possessed powers that far surpass that of low and mid-tier demons. Since then he has been cured of both being a demon and the Mark. 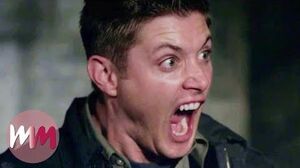 Retrieved from "https://villains.fandom.com/wiki/Dean_Winchester?oldid=4205382"
Community content is available under CC-BY-SA unless otherwise noted.