Serve his master (as Death's Hand).

Death's Hand (originally known as Sun Kin the Hand of Heaven) is one of the primary antagonists of the video game Jade Empire. He is the dreaded leader of the Lotus Assassins who serves in the game's first half Emperor Sun Hai and in the latter half Sun Li the Glorious Strategist.

He was voiced by Sherman Howard as Death's Hand.

Life as Sun Kin the Hand of Heaven

Sun Kin was born as the youngest child in a trio of royal brothers. While the eldest, Sun Hai, became the Jade Empire's ruler and the middle child Sun Li the Glorious Strategist became the commander of the Imperial Army, Sun Kin became the head of the monastic Order of the Lotus. In this role, his duties included direct protection of and servitude to the Emperor.

Prince Kin accompanied his brothers in the assault of Dirge as part of their campaign to end the Long Drought and steal the divine powers of the Water Dragon, the goddess of rebirth. The Hand of Heaven used his battle prowess to kill many Spirit Monks before facing with the Glorious Strategist on the temple's stairs Abbot Song, the head Spirit Monk. Kin attacked him head-on, and Sun Li cut the abbot down from behind. The three Sun brothers then entered the temple unopposed. What Emperor Sun Hai didn't know was that his younger brothers conspired against him, intending to claim the Water Dragon's power for themselves.

Princes Sun Li and Kin watched as Sun Hai gave the killing blow to the Water Dragon through the portal to the spirit realm and claimed her heart. At this point his brothers decided to make their move, and Prince Kin impaled his eldest brother from behind. Much to his and Li's shock, however, Hai didn't die thanks to the Water Dragon's power. He then struck his brothers with magical energy, sending Sun Li to fly across the chamber and giving him a chance to escape. Sun Kin was trapped by Hai's energy beams and forced to terribly suffer for his treason.

When Sun Hai found Sun Li's discarded armor, he used his newfound powers to trap the spirit of the nigh on dead Sun Kin into it in order to taunt Li. At this point, Prince Sun Kin became Death's Hand, a mindless puppet of the Emperor. The people of the Jade Empire were told that Prince Kin had lost his life in service to the Empire.

For two decades, Death's Hand worked as the Emperor's right hand and nominal adviser. He continued leading the Lotus Monks, corrupting and converting them into Lotus Assassins. With his largely unknown origins and perpetual usage of Sun Li's armor, Death's Hand was feared even among his ruthless Lotus Assassins. The common folk preferred to talk about him as little as possible with hushed tones. He was believed by many to be loyal to the Emperor, but as the years went by and Sun Hai appeared less in public, there were whispers that Death's Hand had a poisonous influence on the Emperor and was secretly abusing his authority for his own ends. Sun Hai's daughter and heir, Princess Sun Lian the Heavenly Lily, was one of those who suspected as such. However, it was all along the Emperor's purpose to make Death's Hand seem responsible for carrying out his master's orders.

In the beginning of the gameplay, Death's Hand leads the attack to the remote village of Two Rivers and takes captive Sun Li the Glorious Strategist, who has been training the last living Spirit Monk as his pawn for the last twenty years. Death's Hand takes Sun Li back to their brother Emperor Sun Hai, leading the last Spirit Monk to follow their trail across the Empire.

When the last Spirit Monk is asked by Princess Sun Lian to find evidence about the Assassins' shady activities, they infiltrate the Lotus Assassins' headquarters — the mausoleum built for Emperor Sun Hai originally — as a Lotus Acolyte. They eventually cause golems to wreak havoc in the underground tomb, kill the Assassins' second-in-command Grand Inquisitor Jia in the throne room and retrieve the last missing piece of the Dragon Amulet from the throne. Having been summoned by Jia before her death, Death's Hand enters the room quietly through a waterfall behind the throne. He attacks the Spirit Monk, kicking them across the chamber. Before he can kill them, he's attacked by the turncoat Assassin Sagacious Zu. As Death's Hand tries to slice Zu, he's tricked to damage the two pillars supporting the chamber. He manages to stab Zu with a quick motion, but then the roof falls upon them, giving the Spirit Monk the chance to escape from the grumbling fortress.

Following the deaths of Emperor Sun Hai and the last Spirit Monk along with Sun Li's ascension as the new ruler, the new Emperor goes to the ruins of the Lotus Assassins' fortress and uses the Water Dragon's stolen powers to bind Death's Hand to himself, considering it a waste to let his enslaved brother to rest in peace. As Death's Hand emerges from the ruins, Sun Li tells him that they have to return to Dirge.

The fate of Death's Hand

If the Spirit Monk decides to show mercy, they release Sun Kin from the armor and allow him to enter the Great Wheel. If they decide to bind him to themselves, Death's Hand serves as one of the followers for the remainder of the game. If the Spirit Monk goes through the Closed Fist ending, Death's Hand continues his old role as the ruthless enforcer and eventually transforms into something more fearsome due to his master's growing power, with Sun Li's armor becoming too small for him. If the Open Palm ending occurs, Sun Kin regains control in the following weeks and decides to wander the Empire to seek redemption, continuing to use Sun Li's armor to remind himself of the monster he didn't recognize in himself.

Outwardly Death's Hand appears to be an utterly ruthless warrior incapable of feeling remorse or pity. He believes in leading the masses with fear, including his Lotus Assassins. This dreadfulness combined with his mysteriousness have led many to believe that he's secretly hording power from Emperor Sun Hai, when in reality he was created as nothing more than the Emperor's puppet. He also displays overconfidence with the way he taunts Sagacious Zu for attempting to fight him despite knowing it to be futile, failing to realize that the rogue Assassin only tried to buy time. He also fails to consider the possibility that Sky's loyalty for the last Spirit Monk would outweigh his fear of Death's Hand and longing for his deceased daughter.

The real persona of Death's Hand, Sun Kin the Hand of Heaven, isn't as explored as those of his brothers. What is known is that he had a neutral alignment between the Way of the Open Palm and the Way of the Closed Fist. It isn't made clear if he allied with Sun Li to betray Sun Hai just out of lust for power or for the good of the Jade Empire. When his spirit is summoned to retake control from Sun Li, he expresses weariness from all the years of enslavement and remorse for following his brothers in their madness, saying that if he had known what would happen, he'd have fought to stop them both. He asks to be allowed to rest in peace, expressing gratitude if allowed so and warning the last Spirit Monk of their ambition if they choose to bind him to their service.

Before becoming Death's Hand, Prince Sun Kin was a skilled fighter who could match both of his elder brothers. Both before and after his corruption, he fought with two dark blades called Fallen Blades. One blade being long and the other being short, he used them both with deadly precision. By being linked to the stolen power of the Water Dragon as Death's Hand, he possessed enhanced strength and resilience, able to rise from every defeat by his master's summoning. 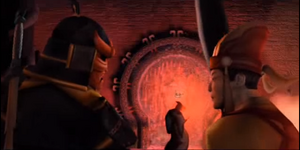 Sun Hai getting the idea of binding Kin's spirit to Sun Li's armor. 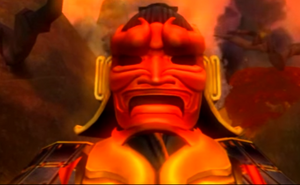 Death's Hand emerging from the ruins of the Lotus Assassin fortress. 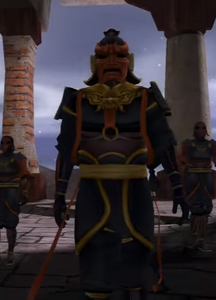 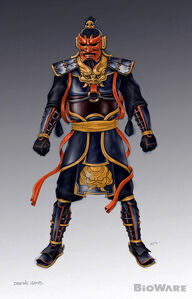 Concept art of Death's Hand.
Add a photo to this gallery

Retrieved from "https://villains.fandom.com/wiki/Death%27s_Hand?oldid=3570848"
Community content is available under CC-BY-SA unless otherwise noted.