Lord of the Dead

Serve his master for all of eternity and resurrect him whenever he falls.

Direct cause of every demise

Death is the secondary villain of the Castlevania video-game franchise, based on the Grim Reaper of folklore. The divine ruler of Limbo and dead souls who decides who dies and lives, he is Dracula's first and foremost follower and second-in-command and often attempts to resurrect him or serves as his last line of defense.

Death appears in most games of the series, with the exceptions of Castlevania the Adventure, Castlevania: Belmont's Revenge, the phone game Castlevania: Order of Shadows (though there is an artwork of him), and the arcade game Haunted Castle. Death will be dwelling either in the Clock Tower or the Dungeons of the Castlevania, being most often the second-to-last boss. Death is in most cases a formidable foe, sometimes even harder than Dracula himself, and the King of the Night is rarely a boss to be sneezed at.

Death frequently confronts the heroes when they enter the Castlevania, or when they are about to enter it (as seen in Castlevania: Rondo of Blood, Castlevania: Symphony of the Night and Castlevania the Arcade). Although there are some games in which he only has a minor role, he mostly serves as a major antagonist.

Death is a fallen angel who was condemned to hunt for souls for all eternity. Holding his silent grudge against God, he waited for the rise of the King of the Night. He shares characteristics with the Shinigamis (Death Gods) of Japanese Folklore, but he is the real Grim Reaper. In some games, there are minor Reapers that are implied to work under him.

As the harbinger of death, Death and Dracula are natural allies. Death would help anyone trying to revive his lord, and would wander through the land spreading death and sowing misery to make men's hearts hateful, so that their evil would bring Dracula back. He is stated to obey the wielder of the Crimson Stone, an alchemic jewel controlling souls in possession of Dracula, but their relationship is deeper that a mere bond to an artifact, and he is repeatedly described as Dracula's closest friend and confident. He himself states to work with those who follow the calling of Chaos, to which he is bound.

In most games, he appears to be destroyed after his defeat, but he is never gone for real and it is implied that only his physical incarnation is gone, while his essence is sent back beyond the Veil, until he recovers. In Castlevania 64, he is seen forcibly expelled from the Earthly Planes and states that he will await his victor in Hell.

Death is absolutely loyal and takes great pride in working for Dracula, holding his lord in very high regards. This is notable when he is confronted to people coveting his lord's throne, as he finds the mere idea of the Castlevania being ruled by anyone else than Dracula "positively absurd".

Death is cocky and confident, but he never holds back against his foes unless he sees a good reason for it. He is cold, cruel, imposing and menacing, never losing his composure and remaining stoic, even when angered. He rarely works with other followers of Dracula, and prefers acting on his own. He revels in demises of all sorts and enjoys very much to taunt and torment both his foes and the dead souls in his grasp.

He harbours contempt towards heroes, but no outright hatred. He addresses them with cold politeness or harsh indifference following his mood, only resorting to insults when he is defeated or outraged. He acknowledges their merits nonetheless, and never hesitates to taunt the heroes whose power is not at its fullest, calling them a disgrace to their name. Moreover, he can prove honourable and respectful, willingly cooperating as long as their goals converge, though he insists that they remain enemies.

Death is a highly intelligent tactician and manipulator, who often uses the heroes when he shares their goal (Ada and Lydie, in Legacy of Darkness and Harmony of Dissonance, Brauner's defeat in Portrait of Ruin). He lets them progress, even stealthily guiding them, before appearing to seize the prize under their noses. Moreover, he can devise elaborate schemes, acting through unsuspecting proxies and smoke-screens from behind the scenes under a seemingly innocuous aspect, but he rarely bothers, preferring to seize opportunities as they go.

He has (or had) apparently a great deal of respect for Alucard, as he somehow bemoans the fact that he sides with mankind and seems reluctant to fight him. However, all the respect he could have for anyone would not prevent him to attempt to get rid of him or her, should they rise against Dracula.

As expected of a minor deity, Death is extremely powerful. He has full control over Limbo, where he gathers all the departed souls under his command, which he can summon and do with them as he pleases.

He can cause demises; though he seems unable to do so with the heroes, having to attack them upfront. He masters magic and Dark Rituals, he can shape-shift and alter his aspect, seal people in coffins, rip souls from their bodies, and create images of himself. As a demonic chaotic being, he is resistant to Dark but weak to Holy.

His signature technique consists in conjuring never-ending waves of sickles to harass the players, that can intercept projectiles and must be destroyed to reach him. He also wields his huge scythe with immense proficiency and use death-themed attacks: Launching dead souls like rays or whirling blasts; conjuring tormented souls; hurling energy balls, scythes of energy or giant, ghostly skulls; causing huge explosions; and so on and so forth.

When defeated, he sometimes transforms into a more powerful skeletal monster to continue the fight. 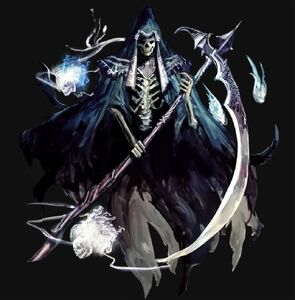 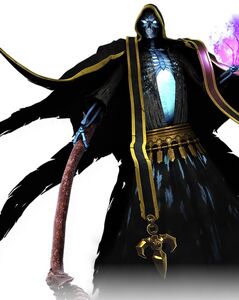 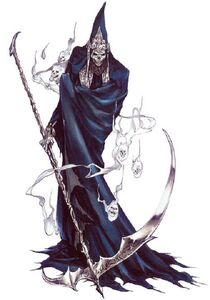 One of Death's many artworks.