Taking souls into the afterlife.

Take Dante to Hell (failed, but indirectly succeeded for a while).

Death was a major antagonist in the video game Dante's Inferno, in which he functioned as the first boss.

He was voiced by Dee Bradley Baker and Richard Moll in English and Naomi Kusumi in Japanese.

Since the beginning of time, Death had been tasked with ferrying the Souls of those that died and bring them to their place in the Afterlife.

After Dante Alighieri was stabbed in the back by an assassin at Acre harbor, time stopped and Death appeared before him. Death tells Dante that he would suffer eternal damnation for his Sins. He demanded that Dante come with him to Hell, but the crusader refused to accept his fate.

Death drew him into a void between the mortal world and the Spiritual world, and there the two battled. Despite the Grim Reaper almost succeeding in winning, and sending Dante to Hell, Dante managed to take his scythe.

Despite Death begging Dante to spare him, Dante finish him off with Death's scythe. Afterwards, Dante kept Death's scythe and used it in his travels back to Florence, and more importantly, his journey through Hell.

Death has great spiritual powers and is able to freeze time, bring souls to their place in the afterlife, and teleport. In combat, his main weapon is his scythe, which he can attack with in various ways. 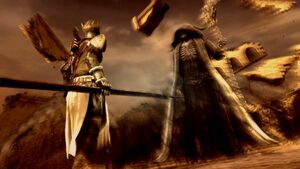 Dante finishing off Death
Add a photo to this gallery

Retrieved from "https://villains.fandom.com/wiki/Death_(Dante%27s_Inferno)?oldid=3779871"
Community content is available under CC-BY-SA unless otherwise noted.