Keep collecting the souls of his victims.

Arrogant Soul-Collector
Death is an antagonist in Regular Show. He seems to know Skips a great deal and sees him as a rival. Despite tormenting the Park Workers in many episodes, Death is a good soul deep down as most of his crimes are the result of him doing his job. That said some of the bets he makes throughout the series shows that he's slightly corrupt.

He is voiced by Jullian Holloway in a Cockney accent.

Death first appears in "Over The Top". In this episode, Death and Skips arm-wrestled for Rigby's soul (who had died earlier in the episode after Skips killed him by arm-wrestling him hard enough to slam his head into a table). After Death lost after a lot of effort on Skip's part, he swears that he will have his revenge, brings Rigby back to life by spitting on his mouth, and disappears.

He returns in "Skips Strikes" and competes against the Park Strikers, a bowling team consisting of Rigby, Skips, Mordecai, and Benson. He blackmailed Skips that if he competes, Death will tell his secret to everyone. Worse, the episode reveals that Rigby recklessly made a bet with Death in exchange for a soul ball if they win. If they lose, Death gets their souls.  At the game, he and his teammates cheated by using their magical powers to make strikes; even attacking the person supervising the game to get away with it. After losing thanks to Skips, he gives Rigby a soul ball as promised before leaving.

He returns in "Dead at Eight", along with his wife and their child, Thomas. After his babysitter canceled, he shows up to take Muscle Man's soul, due to his stunt. He gives Mordecai and Rigby a proposition; if they successfully babysit Thomas and put him to bed before eight, he would spare Muscle Man's life, otherwise, he would put him in his wife's jewelry box. After he came home, he sees the place trashed, but his wife was pleased that Thomas was asleep (knocked out). He tells Mordecai and Rigby that they were the best babysitters ever and frees Muscle Man. In the end, he predicts that Muscle Man will die in a hot dog eating contest.

He appeared in "Exit 9B" to help Mordecai and Rigby stop the villains from taking over the Park. Despite this, he likely only helped them because it was his job as Garret and his son brought back various villains that died though he could have also helped them out of gratitude towards the good job Mordecai and Rigby previously did for him as Thomas' babysitters.

In "Last Meal", he appears about his prediction of Muscle Man's death coming true, by a hot dog eating contest. When everyone tried to bail Muscle Man out of the competition, Death decides to take Muscle Man's soul anyway. So, Death decided to challenge Muscle Man for his soul. Later, when he notices Muscle Man and Starla making out in public, Death throws up, making him disqualified. He leaves angry and spares everyone. 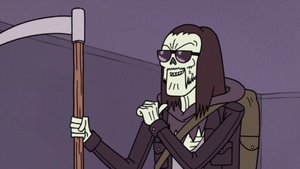 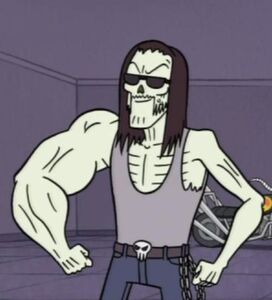 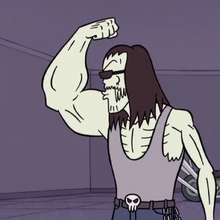 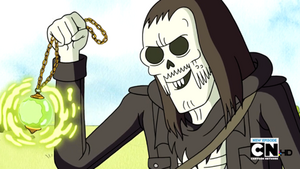 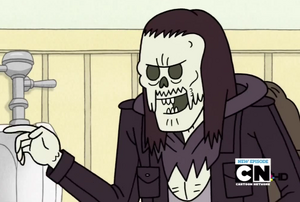 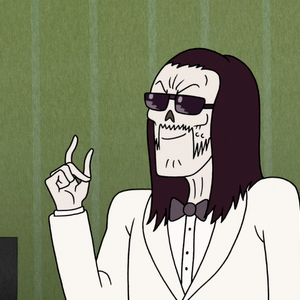 Retrieved from "https://villains.fandom.com/wiki/Death_(Regular_Show)?oldid=4164765"
Community content is available under CC-BY-SA unless otherwise noted.