Death Adder is the main antagonist and the most iconic villain of the Golden Axe video game franchise.

He was voiced by Masaharu Sato in PCE version of Golden Axe and the late James Avery in Golden Axe: Beast Rider.

Death Adder is a surviving descendant of evil giants with terrible powers who eons ago (way before the birth of humanity) challenged Gods to a great bloody war that lasted what seemed to be eternity until the tide of war finally turned in gods' favor, vanquishing evil giants to the darkness. Over time, Gods abandoned their lands and mankind was born, beginning to thrive on lands that once belonged to gods. Death Adder, survived and made it to human world, began to seek nothing but to conquer all lands of Yuria.

Death Adder manipulated evil humans who craved for violence into finding and handing over Golden Axe, a mystical weapon and artifact forged by gods while they stayed on human world that imbues its user with various incredible powers: at the hands of virtuous it grants its user prosperity and peace, but at the wrong hands it will bring calamity and destruction. Now armed with Golden Axe and being granted of even vaster power (as if he wasn't powerful enough already), Death Adder gathered army of brigands who worship him as the embodiment of the power they desire and proceeded to conquer the land of Yuria.

Six years prior to event of Golden Axe, Death Adder and his army of killers launched a general attack on Firewood Kingdom and laid a wholesale waste to once a peaceful and prosperous nation. Death Adder himself, with the enhanced power Golden Axe gave him, mercilessly slaughtered through anything breathing and moving like a hot knife slicing through the butter. With Death Adder who has Golden Axe leading the invaders, the battle was totally one-sided and no contest. In overnight, Firewood Kingdom that existed for 6 centuries, was no more. During the crescendo of the carnage, Death Adder personally executed the Firewood king with Golden Axe. The war so was so extremely bloody that only three people in the whole kingdom survived the unprecedented carnage: in fact the first stage of the game Golden Axe is a wasteland where Firewood Kingdom once existed.

Once again using the power of the legendary Golden Axe, Death Adder this time set his sight on Southwood Kingdom of Yuria. Imprisoning the king and his daughter of Southwood, Death Adder once again unleashes his wicked horde of minions to enslave and/or massacre all people of Southwood, making him their evil ruler. Although not as bloody and destructive as happened in Firewood, many villages of Southwood were pillaged and all who opposed Death Adder were mass-executed in cold-blood.

It was then three heroes united by tragedy vowed to put an end to Death Adder's tyranny. They were Ax Battler the barbarian, Tyris Flare the amazon, and Gillius Thunderhead the dwarf. Tyris was a princess of now-defunct Firewood Kingdom whose mother the queen had hidden Tyris from Death Adder's forces (at the cost of her life). To make matters even more tragic for her, Tyris lost her people, her kingdom, and her family on her birthday. Gillius was once a guardian and protector of Firewood Kingdom royal family who was knocked unconscious during battle and was protected by his brother (also at the cost of his life). Ax was out hunting when his village belonged to Firewood Kingdom was razed to the ground. The trio are said to be sole survivors of Firewood Kingdom, who had their families and relatives lost to Death Adder, Together, they traveled the lands of Yuria, fighting Death Adder's minions and freeing the people from slavery. They invade Death Adder's castle, where they face the giant in battle. Death Adder, in spite of his terrible power granted by Golden Axe, is eventually defeated, and the three warriors who defeated Death Adder are hailed as saviors. But even after Death Adder's defeat, his remnant of savages continued to pester Yuria, and Ax Battler offered his service to Yuria for mop-up operation. Gillius Thunderhead takes Golden Axe for safeguarding.

Many years later (Revenge of Death Adder event), when people of Yuria were living in peace again, Death Adder emerged from the darkness, along with his own castle, takes Golden Axe, spreading chaos and destruction once more. In Revenge of Death Adder innocents who are subject to various abuses inflicted by Death Adder's tyranny are shown more explicitly: in previous Golden Axe villagers are being simply bullied. But in the sequel people are being whipped as they are forced to build sculptures of Death Adder, locked up in the prison while starving, chained while they are being taken to either slave markets or being forcibly conscripted etc. This time, Death Adder wanted revenge. Four new heroes (it is hinted strongly from Golden Axe III plot that Tyris and Ax might have died of old age) stood against his forces, fighting their way after the evil giant. They invade his castle by flying in the back of a dragon, and face Death Adder, defeating him again. However, as they were fleeing the crumbling castle in the dragon, Death Adder ambushes them, in an attempt to kill all of them at once. Gillius Thunderhead, who was along with them, uses the Golden Axe and hits Death Adder in the head, but they both fall from the dragon. Gillius dies, but Death Adder dies as well, and the Golden Axe disappears.

Eight decades after Revenge of Death Adder, (this time is Golden Axe the Duel event), Golden Axe is seen once again, and Death Adder somehow shows himself up again, in spite of being supposedly killed at the hands of Gillius. He enters into fighting contestant to eliminate any and all who oppose him, to obtain Golden Axe and harness its power so he can once again rule the land of Yuria. Along the way he encounters some descendants of his archenemies including Milan Flare, a female descendant of Tyris Flare. Death Adder's dwarf archenemy, Gillius Thunderhead, who somehow managed to survive as well, and also entered the tournament for Golden Axe. He is one of the ten playable characters, though players also encounter Death Adder as a sub-boss and as the tenth opponent before the final boss fight (the final fight is against Golden Axe which manifested into human form). But in case of Death Adder, he gets to fight his mirror doppelganger before the final fight with the Golden Axe. In Death Adder's ending, after defeating the Golden Axe in human form, Death Adder takes the Golden Axe as his own once more. With the weapon of gods in his possession, he immediately re-conquers Yuria. Not content with just Yuria, Death Adder, along with his army of demons, monsters and barbarians, expands his venomous tyranny onto all other parts of the world, and proceeds to wage bloody and destructive campaigns of conquest. Ultimately the world has no choice but to bow down to his terrible power - thus began with the age of endless abyss.

Golden Axe: Beast Rider is an alternate retelling of Golden Axe. In this game Golden Axe is not Death Adder's weapon: in the final battle he summons Golden Axe from Tyris and to him in a bid to kill her. After Tyris retrieves Golden Axe by defeating him and removes his armor, Death Adder transforms into Titan, a serpentine monster. Death Adder attacks Tyris with fireballs, tails and is quite agile. After a tough duel Tyris manages to defeat him.

Death Adder is one of the four currently playable Golden Axe characters in SEGA Heroes. 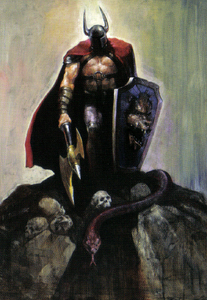 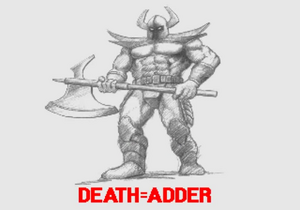 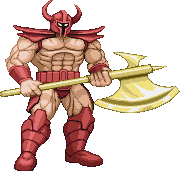 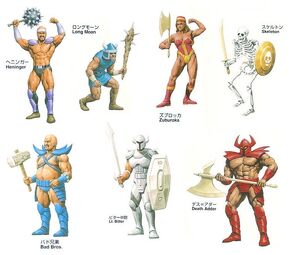 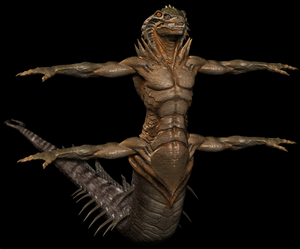 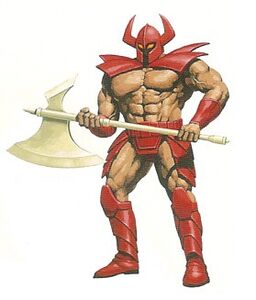 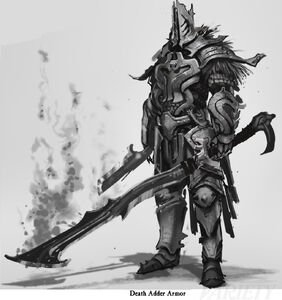 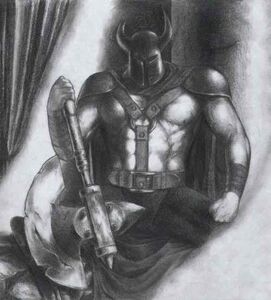 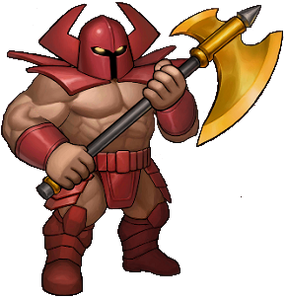 Retrieved from "https://villains.fandom.com/wiki/Death_Adder_(Golden_Axe)?oldid=3773524"
Community content is available under CC-BY-SA unless otherwise noted.