Death Bear is a one-shot antagonist of the 2010 Cartoon Network animated series Regular Show. He appeared in the titular episode "Death Bear" as the main antagonist.

His vocal sound effects were provided by Dee Bradley Baker.

Death Bear is a large brown bear wearing a red cape around his neck, and a black pickelhaube.

Death Bear was described as "Evil to the core". Troubled in his younger days, he is known to kill anyone he sees and is an extremely dangerous and aggressive predator.

15 to 20 years prior to the event of the episode, he was a troubled bear who lived in the Park Zoo. One day, out of nowhere for undisclosed reasons, he killed his trainer. The zoo was forced to close down because of this, but Death Bear refused to leave. Thus, he is left to roam the abandoned zoo, growing more evil over the years and was able to survive by breaking into people's homes, eating off on their food and then the resident themselves.

When Mordecai, Rigby, Margaret and Eileen traveled to the abandoned zoo to take a picture of the group in its cage, they are ambushed by Death Bear, who chased them all the way back home in a murder attempt. Here, they call animal control to trap Death Bear, but they are unsuccessful. Death Bear then attempts to kill the gang but Mordecai keeps firing tranquilizer darts at him (after accidentally hitting Rigby in the shoulder first with a dart), which seem to have no effect on the beast, until he suddenly falls down asleep.

Death Bear then was taken to an animal sanctuary, where he lived better and possibly redeemed himself. 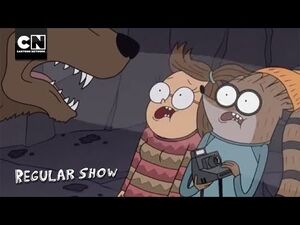