Conquer the Wizarding Great Britain and achieve a global dictatorship under a magical regime
Destroy all of their enemies (all failed).

The Death Eaters, also sometimes called "The Eaters" and sometimes known as "Knights of Walpurgis", are the main antagonistic faction of the Harry Potter franchise.

They are a society of renegade Witches and Wizards who serve as the followers of the infamous Dark Wizard Lord Voldemort.

The group primarily consisted of radical pure-blood supremacists who practiced the Dark Arts with reckless abandon, without regard to or fear of wizarding law. Voldemort used this select group of Wizards and Witches during both the first and second Wizarding Wars, employing them as his elite force.

They are often cloaked and wear dark, oddly-shaped masks with snake-like eye slits to cover their faces. They also tend to wear tall, pointed hats approximately half the length of the wearer's height. Death Eaters are not to be confused with Dementors, the guards of Azkaban which are similar in shape.

Death Eaters are often spies; they keep their loyalty to Voldemort secret as many are involved in British Wizarding politics and various bureaucratic organizations.

The Death Eaters had a symbol on their arm, called the Dark Mark, a skull with a serpent crawling out of the mouth. When Voldemort touched one of them via the Protean Charm, each of the Death Eaters felt it, signaling for them to Apparate to their leader's side. A larger Dark Mark cast in the sky with the spell Morsmordre would sometimes be used to frighten the Wizarding World, because it was frequently cast at the site of murders.

Notable Death Eaters are Lucius Malfoy, Belatrix Lestrange, and Severus Snape. Snape, who served as a professor of potions at Hogwarts, served the Dark Lord but was also a true friend of Albus Dumbledore, the headmaster of the school. Lucius is the father of Draco Malfoy, an enemy of Harry Potter and student of the Slytherin House. Draco later became a Death Eater himself; both he and his father planned the death of Dumbledore as well as Harry.

When Voldemort was finally defeated by Harry through a rebounded Killing Curse, the Dark Marks on the Death Eaters' arms turned into powerless scars and the ones who survived the Battle of Hogwarts were immediately arrested, while others fled away. It is unknown if those who fled got arrested afterwards, or if they are still on the run. 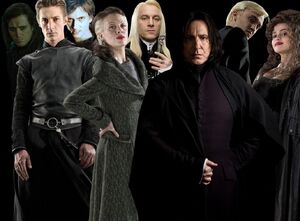 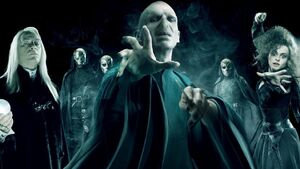 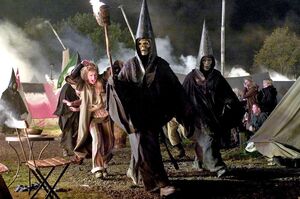 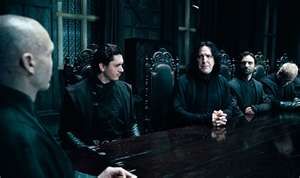 The Death Eaters with their leader Lord Voldemort. 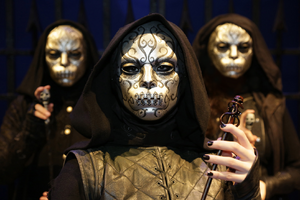 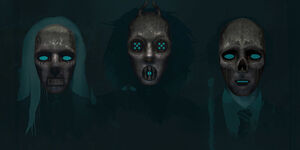 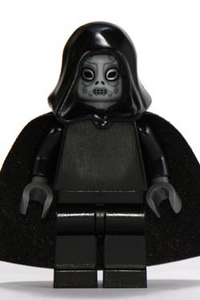 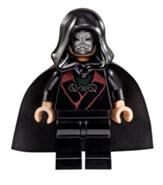