Be feared by the most people possible.

Show the world the art of killing.

Death Gun is the main antagonist of the Phantom Bullet arc of the anime/manga/light novel series Sword Art Online. It is the avatar used by the Kyouji Shinkawa and Shouichi Shinkawa to commit murders in Gun Gale Online.

Death Gun is the avatar of Shouichi Shinkawa and his followers, said to have the ability to kill a player in real life from a virtual world. Death Gun was feared among the players of Gun Gale Online (GGO) as serial killer after killing a veteran player who was recording live within the game.

The name of his weapon is also Death Gun, it is a Chinese Type 54 "Black Star" pistol. His gun is said to have the ability to kill a player in real life when a bullet hits a players avatar, but it is later revealed that it is physically impossible to do so. In actuality, Death Gun and his followers had come up with a clever method of making it appear that Death Gun could kill anyone. One of Shoichi's followers broke into the target's house and injected a drug into their body at nearly the same time they were being shot in the virtual world, The drug would cause the victim to go into cardiac arrest almost immediately, causing a force logout from GGO and thus making it appear they had died from the initial shot fired by Death Gun.

The avatar of Death Gun is voiced by Souichirou Hoshi in the original Japanese version and by Benjamin Diskin in the English dubbed version.

Death Gun made his first appearance in the first episode of Sword Art Online II, in a VRMMORPG known as Gun Gale Online. As a top ranked player named XeXeeD appears on a streamed broadcast via his avatar, "Death Gun" fires a bullet at XeXeeD's avatar through a video screen, causing XeXeeD to suddenly convulse and disconnect. Later, it is revealed that XeXeeD's user was found dead of heart failure a few days after his avatar was shot. There is also evidence of a similar case involving the death of another GGO user.

He appears again at the end of episode 3, grinning hungrily while overhearing an online voice-chat discussing about him and looking at a photo of Sinon.

In episode 5, Death Gun confronts Kazuto Kirigaya, better known as Kirito, in the preliminary waiting area, after Kirito won his first qualifying battle for the "Bullet of Bullets" (BoB) tournament. Death Gun recognizes his name and asks Kirito if he is the "real thing." towards the end of their exchange, Kirito catches a glimpse of a tattoo on Death Gun's wrist and recognizes it as the emblem of the Sword Art Online (SAO) murderer's guild Laughing Coffin. Then, Death Gun states that he will kill him whether or not he is the real Kirito and leaves.

To prove his "true" killing ability to the rest of the world, Death Gun enters into BoB tournament under the alias "Sterben," which means "death" in German. He appears at the end of episode 8, shooting Pale Rider with a silenced stun bullet and is about to finish him, when Sinon shoots at him. However, he easily dodges her bullet and then executes Pale Rider. At this point, Death Gun points his Handgun into a camera and introduces himself to the world, finishing his monologue with the catchphrase "Its Show Time," which was used by PoH, the founder of Laughing Coffin. At this point he disappears, much to the confusion of his pursuers, who as of this point still do not know his in-game alias.

Kirito and Sinon, reviewing the possible BoB members that Death Gun could be, decide to go after Gunner X, who is located in a stadium in the middle of the map. They mistakenly assume he is Death Gun, since Gunner X's name seems the closest possibility due to it having "gun" in it. Death Gun, who is actually called Sterben, ambushes Sinon with a stun bullet, and proclaims that he is going to kill her in order to anger Kirito and make him go berserk. She makes a move to defend herself, but then sees that Death Gun's sidearm is none other than the Type 54 Black Star, the same weapon she used as a little girl to kill a robber in a bank robbery. However, before Death Gun could shoot Sinon, he is interrupted by Kirito, who shoots him in the shoulder with a marksman rifle and then throws a smoke grenade, forcing Death Gun to retreat. He later takes control of a mechanical horse and gives chase to Kirito and Sinon, who are attempting to escape on a motorcycle. During the subsequent chase, Death Gun fires at Kirito and Sinon with his pistol, terrifying the latter. Eventually, with Kirito's help, Sinon fires her rifle and, though the shot misses Death Gun, it hits the fuel tank of a truck, which explodes and forces Death Gun to abandon his horse, allowing Kirito and Sinon to escape.

While the two are hiding in a cave to avoid an impending satellite scan, Kirito pieces together how Death Gun is able to kill people from a virtual world. He uses an accomplice to break into the victim's house and inject a drug in the player's body, so that when they get shot in the virtual world, they appear to die only moments later from said gunshot, when in reality the player is of drug induced cardiac arrest.

While Dark Wind is closing on Kirito, Death Gun appears and decides to kill Kirito himself. However, as soon as Dark Wind is killed, Sinon turns her attention to Death Gun and shoots at him. Death Gun shoots as well and their bullets nearly collide mid-way. Death Gun's bullet destroys Sinon's scope, while she managed to destroy Death Gun's entire weapon. Shortly after this engagement, Death Gun is approached by Kirito, who talks with him for several moments before attacking. Death Gun counters by pulling an estoc from the remains of his sniper rifle. Death Gun appears to have an advantage, assaulting Kirito with overwhelming speed. In the midst of the duel, Kirito has a flashback to his time in SAO, and remembers seeing a picture of a Laughing Coffin member with red eyes. Further reflection allows Kirito to finally remember Death Gun's old name: Red-Eyed XaXa, second-in-command of Laughing Coffin. XaXa is caught off guard by the revelation, but continues his attack, moving in for the final blow. At this moment, Sinon aims her rifle at Death Gun, creating a bullet path indicator and causing Death Gun to panic and disengage while attempting to activate his Nanomaterial Optical Camouflage Mantle. Kirito takes advantage of Sinon's "Phantom Bullet" in order to kill Death Gun, using the willpower and strength he possessed in SAO. Before his avatar dies, Death Gun assures Kirito that their battle is not over and dies. 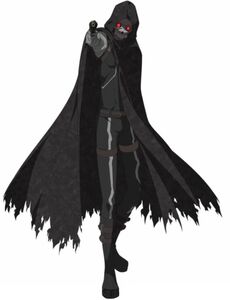 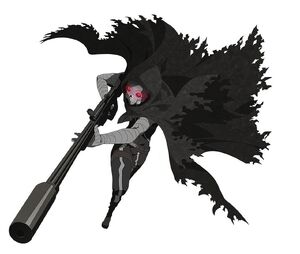 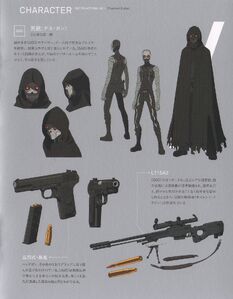 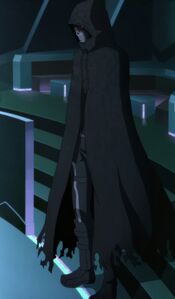 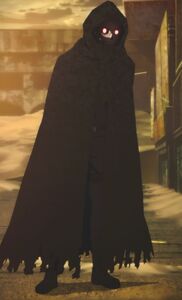 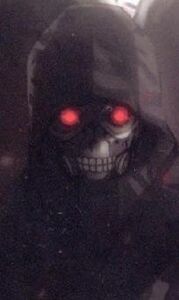 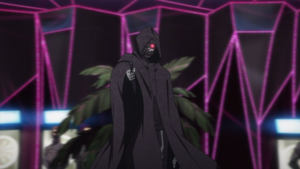 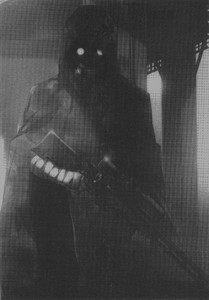 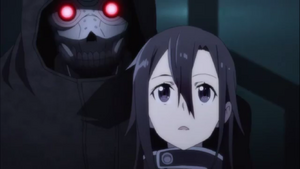 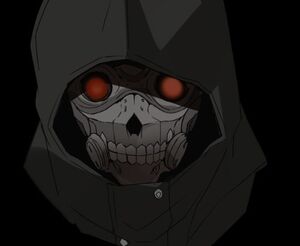 A close-up view at the face of Death Gun. 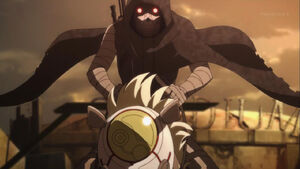 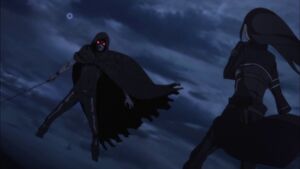 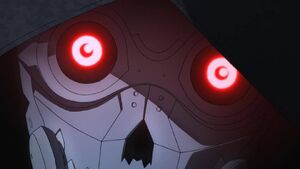 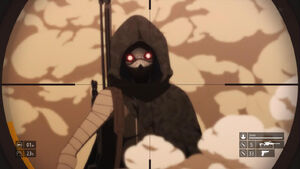 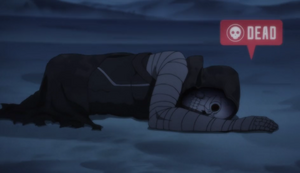 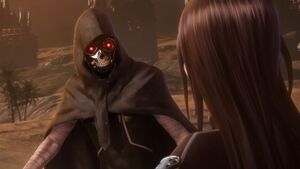 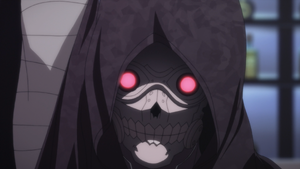 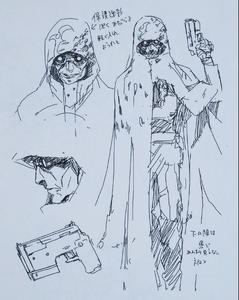