Villains Wiki
Register
Don't have an account?
Sign In
Advertisement
in: Spoilers, Dark Knights, Friend of a Hero,
and 34 more

Protect the Flame Emperor and enforce their plan

The Death Knight, also known as the Reaper in Fire Emblem Heroes, is the second-in-command of the Flame Emperor's Army and a major antagonist of Fire Emblem: Three Houses. He is also the personal rival of Byleth and Caspar.

As the story progressed, his secret identity is first revealed to be Jeritza von Hrym, a teacher at the Officers Academy and a member of the Knights of Seiros. However, in a post-timeskip paralogue that requires Mercedes and Caspar's recruitment, the Death Knight/Jeritza's true name is revealed to be Emile von Bartels, who is the younger half-brother of Mercedes von Martritz.

He is voiced by Atsushi Imaruoka in Japanese version and by Patrick Seitz in English version, with the latter also having voiced Dio Brando in JoJo's Bizarre Adventure anime series.

Emile von Bartels was born to the head of House Bartels, a noble family of the Adrestian Empire, in the Imperial Year 1158. He grew up alongside his elder half-sister, Mercedes von Martritz, their mother having married into the family for financial security following the death of her first husband, whose death resulted in the dissolution of House Martritz. As Emile was born in possession of a Crest, he was to be the heir to House Bartels, but his mother and half-sister were subsequently treated as expendable, his mother having given to Count Bartels what he desired from her.

In 1167, Mercedes and her mother left House Bartels to live in the Holy Kingdom of Faerghus. The then nine year old Emile remained behind, fearing that his father would hunt them down and kill them if he joined them. Eventually, Count Bartels located Mercedes and her mother and planned to reclaim them; however, upon learning that the mother of his son was now past child bearing age, he altered his plans and intended to marry Mercedes instead, so that she would produce more Crest-bearing children for him.

Upon learning of his father's plans, Emile went insane with anger and slaughtered the entirety of House Bartels, determined to protect his sister from such a terrible fate. He had no memory of the massacre, having blacked out from sheer rage, and only remembered regaining consciousness in the aftermath. The incident had caused Emile to develop a psychotic split-personality; the ruthless and bloodthirsty Death Knight.

Although Emile was suspected causing the destruction of House Bartels, there was never enough evidence to convict him of the murders. He was eventually found and taken in by Edelgard von Hresvelg, princess of the Empire, who helped him erase his past. He was adopted into House Hrym as an heir and assumed the name Jeritza, satisfying his bloodlust through the use of hunting grounds given to him. From then on, Jertiza gave his unwavering loyalty to Edelgard and her ideals. On the recommendation of Edelgard's uncle, Lord Volkhard von Arundel, he was given a teaching position at the Officers Academy at Garreg Mach Monastary, serving as a fencing instructer. During this time, he donned a mask in order to conceal his true identity as the missing heir of House Bartels.

Although originally can be seen in Garreg Mach earlier in his normal persona, Jeritza's Death Knight persona first appears during the Flame Emperor Army's raid in the Holy Mausoleum. During this encounter, he remained uninterested in fighting Byleth and their party unless they approach or attack him. After he ended up fleeing, he started to consider Byleth as his personal rival. During Flayn's kidnapping, the Death Knight confronted Byleth in a secret dungeon, eager to fight them, but the Flame Emperor eventually ordered him to retreat to his dismay.

Afterward, Jeritza is no longer part of the Academy staff and can not be found in the monastery, eventually causing everyone to realize he is the Death Knight and a traitor to the Church of Seiros. Later, during Solon's actions in Remire Village, the Death Knight arrives with his army as reinforcements.

During Edelgard's expose as the Flame Emperor and her subsquent invasion of Garreg Mach, the Death Knight serves as the lead of the initial attack. If Byleth chooses to side with Edelgard in the Black Eagles route, the Death Knight will appear as a non-playable ally. His presence was a surprise to Byleth, but Edelgard assured them that the Death Knight is on their side.

Five years later after Edelgard started her war, Jeritza, under his Death Knight persona, was now a general of Adstrian Empire, fighting against the Church of Seiros.

In the Crimson Flower chapter, the Death Knight (initially in the base game) remained absent. He was only mentioned once by Manuela, if she was ever recurited, that the Death Knight sincerely apologized to her about their conflict five years ago, and she decided to let it bygone.

Starting from DLC 3 update, Jeritza becomes a playable character and can be automatically recurited in Crimson Flower route. He serves under his Death Knight class, albeit without his skull mask and speaking normally. Like his sister Mercedes, Jeritza can have romantic S-Support scene with either gender of Byleth, meaning he is one of the few bisexual characters in the game. He also have supports with Mercedes had player recurited her into Black Eagles.

In his sole ending and his ending with Byleth, Jeritza participated the final war against Those Who Slither in the Dark and ended up victorious. Afterwards, he vanished without a trace and was presumed to be on a journey, either alone or with Byleth by his side depending on the ending.

In his support with Mercedes, Jeritza reconciled with his sister and decided to vanquish his Death Knight personality once and for all. In his ending with Mercedes, Jeritza decided to accept his original persona as Emile and turned himself in to face punishment for his massacre of House Bartels. During his imprisonment, he sent a letter to Mercedes, who had opened up an orphanage with their mother, wishing her and her family well. Years later, Emile was released after serving his sentence and reunited with Mercedes. Seeing her brother returning, Mercedes tearfully welcomed him home.

Note: "The Face Beneath" is a paralogue that can only unlocked if the player have Mercedes and Caspar in their house and if the player isn't on the Crimson Flower route.

The Death Knight took command of the defence of Forth Merceus during the Kingdom army's attack. Despite his strength, he fell to the Kingdom's forces. If Mercedes and Caspar's paralogue is completed, the Death Knight dies in Mercedes' arms, as she apologizes for being such a terrible older sister. In his final words, he feebly says her name before breathing his last.

In these two routes, the Death Knight's role is relatively the same to the Azure Moon chapter, but no matter if the aforementioned prologue is clear, his final moment with Mercedes will not be presented in these two routes. 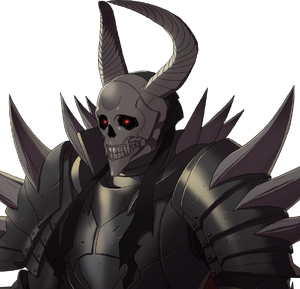 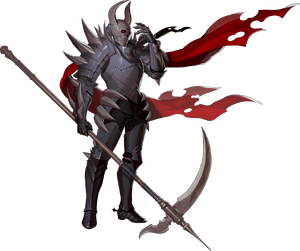 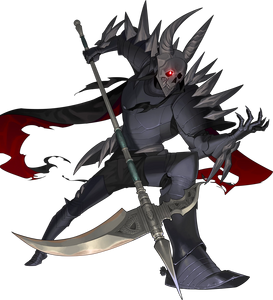 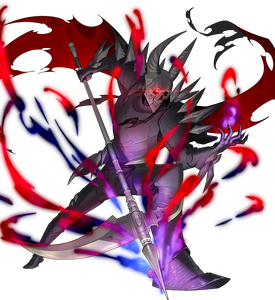 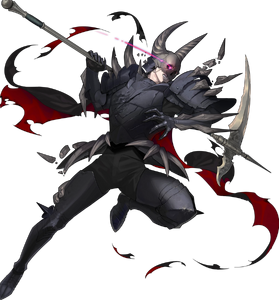 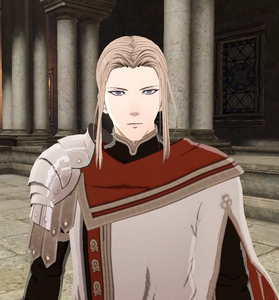 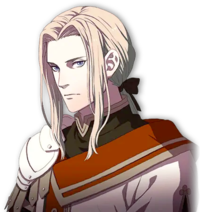 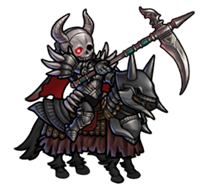 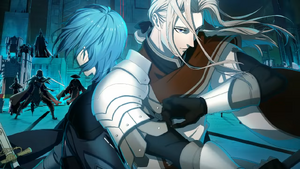 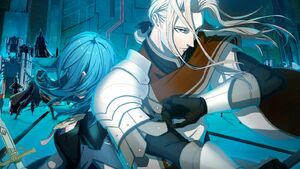 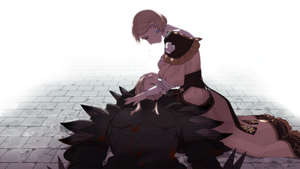 The dying Death Knight with Mercedes (Azure Moon only).