Death Mwauthzyx has the body of a giant robotic cyborg moth. Death Mwauthzyx is the father of the Alien who is responsible for the "programming" of humankind.

Death Mwauthzyx has the power to end all life as we know it. With the single turn of the satellite dish on its head, every universe and the multi-verse will disappear. The ultra-verse and the mega-verse will collapse. The six dimensions will flatten into one, and all existence will be obliterated. The only thing left will be a scaleless bologna sandwich.

When General Dark Onward blew up Mount Fuji in his rage over Atari, he released Death Mwauthzyx from the mountain. Death Mwauthzyx slightly rotated his satellite dish to scare the people of Tokyo. He then began a rampage around the world, destroying buildings. The Alien explains that Death Mwauthzyx would erase existence because humans invented the nuclear bomb and thus Death Mwauthzyx would have to take the Alien's game away, a punishment for the Alien but a painful end to the human race. The Alien tried to set things right only to be trapped for 60 years.

Death Mwauthzyx makes his way to Area 51 and destroys the Nerdmobile and kidnaps Cooper and makes his way to Las Vegas capturing Mandi after she was able to kill Sergeant McButter. Meanwhile the Alien and Nerd learn that Zandor hid the alien metal in the Eee Tee game cartridges allowing the Alien to summon them all and reform the spaceship. Onward tries to get rid of the ship but is killed. The Alien and Nerd rescue Cooper and Mandi while the Nerd asks why Death Mwauthzyx is destroying buildings rather than erase existence. The Alien says that's how his dad got his kicks but ultimately admitted he didn't know either and didn't even fully understand his dad even after five thousand years. The Alien then guesses Death Mwauthzyx is bored out of his mind over knowing everything there is too know and needed one shot at the satellite dish. The Nerd then takes aim at the satellite dish and the laser from the spaceship is absorbed into the dish and sent out into the universe.

For some reason, this causes Death Mwauthzyx to put on novelty glasses and fly away from Earth sparing the entire universe. The Alien asks everyone if they wanted an explanation but all agreed that they didn't need to.

However, despite flying off and deciding to spare the Earth in the movie Death Mwauthzyx returns as the main antagonist and final boss of AVGN 2 Assimilation. After the Nerd completes the final level, he encounters Nostalgia Critic, who tells him not to come any closer. The Critic then explains that Death Mwauthzyx was the one who turned the world into a bad video game and that he is going to destroy him with a bomb in order to get all the glory, however, the Critic talks for too long and the bomb explodes and kills him right before the final battle begins. In the fight, Death Mwauthzyx tries to kill the Nerd by squashing him with his massive hands and by dragging him to one side of the screen with a magnet while firing small robots at him from a cannon on the other side, but the Nerd eventually manages to destroy him and turn the world back to normal. 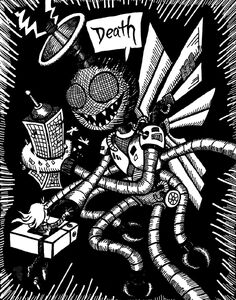 Concept of Death Mwauthzyx.
Add a photo to this gallery
Retrieved from "https://villains.fandom.com/wiki/Death_Mwauthzyx?oldid=3664843"
Community content is available under CC-BY-SA unless otherwise noted.