The Death Watch is a recurring antagonistic faction in the Star Wars franchise. They are a Mandalorian splinter group that opposed the pacifist government of Mandalore, led by Duchess Satine Kryze, during the Clone Wars. The organization was founded by Tor Vizsla in opposition to Jaster Mereel's Supercommando Codex and wanted to return the Mandalorian people back to their ancient roots as the ancient warrior crusaders of their past. After failed attempts at taking over Mandalore, they became part of Darth Maul's Shadow Collective, which successfully took control of Mandalore during the war. They were led by Pre Vizsla who believed that Mandalore's warrior past should be restored and the pacifist government of Duchess Satine made Mandalore and its people weak.  However their actions go against the Mandalorian honor and display the opposite of they claim to stand for, making them hypocritical and heretical that the Mandalorians of old would deem cowardly and dishonorable.

In 200 BBY in the wake of the devastating Ithullan genocide, there were many elements of Mandalorian society that saw their warrior past as dishonorable and advocated that they be abandoned to form a new more civil culture. Half a century later, Jaster Merell had become the new Mand'alor and created a new standard of behavior for the Mandalorian people known as the Super commando Codex. The new code asserted that the Mandalorians were to be high-paid soldiers and conduct themselves as adventurous and honorable mercenaries instead of the savage, dangerous, and warmongering crusaders of their ancient past. Not everyone however, was in support of such a radical change with some rising to the ranks to preserve the traditional warrior customs of Mandalore. One of those people was Tor Vizsla, a barbaric Mandalorian warrior, who attracted many Mandalorians to his cause of preserving the traditional warrior ways of Mandalore's past and thus formed the Death Watch, a new movement and organization to restore the traditional Mandalorian warrior culture. Tor Vizsla then proclaimed the intent of Death Watch to restore the warrior culture of Mandalore, seeking to return to the days of the Mandalorian crusaders and even wanted to wage a second war of conquest like the ancient Mandalorian Wars of the Old Republic era. In response, Mereel's faction rebranded as the True Mandalorians and a civil war broke out between the two warring sides.

Following the outbreak of the Mandalorian Civil War, the True Mandalorians and the Death Watch began to war with each other across various systems, one of them being the agricultural world of Concord Dawn. The two sides engaged in a militaristic and fierce firefight which forced Jaster and his forces to retreat and Vizsla ordering his men to chase them into the crop fields where a young Jango Fett was present working on the family harvester when Vizsla's troops arrived and forced the young boy to reveal the location of his father's home where he was harboring True Mandalorian soldiers. The Death Watch leader then proceeded to beat the boy's father and threatened to kill Jango, when his mother interveaned and saved her son after killing one of the Death Watch soldiers, when Mereel arrived and saved Jango, but his parents were murdered and his sister was kidnapped by Death Watch. As Mereel and his troops retreated, Vizsla ordered that the fields be burned in hopes of killing them and he then moved himself and his troops to Moonus Mandel to celebrate their victory, but the True Mandalorians were actually hiding and proceeded to ambush and take down the Death Watch forces while they were off guard killing almost all of them in the process. The rest of the Death Watch troops that weren't gunned down, perished in the tank following its destruction and Jango killed the soldier responsible for his parents' death thus, he avenged them, but Vizsla still got away.

Years later, the Death Watch lured the True Mandalorians into a trap on Korda Six where Mereel and his troops were aiding a Korda Defense Force squad that was pinned down by local forces, when the Death Watch emerged and revealed themselves - much to the surprise of the True Mandalorians. Jango, now a fully-fledged Mandalorian warrior, engaged the Death Watch forces with his troops under his command and fought back many of them while Mereel and his second-in-command, Montross, were taking heavy fire from Tor Vizsla himself. Barring the scars from his previous encounter with them, Vizsla rained down fire from his four-wheeled tank onto Montross and the now injured Mereel. Montross ended up betraying the Mand'alor and gave Vizsla the chance he needed to kill Mereel this, ending the battle in victory for the Death Watch, but at the cost of heavy casaulties and an overall pyrrhic victory.

Two years later, Jango Fett had escaped slavery and returned to Galidraan where he recovered his long lost Mandalorian armor and reunited with the governor of Galidraan. He held the governor at gunpoint and demanded the location of the Death Watch. He would later find the location of the Death Watch forces on the personal starship of Tor Vizsla, the Death Rattle, which was flying over Corellia. Jango used a starfighter to attack the ship and layed assault to the bridge of the cruiser, using his jetpack to to fly through the viewport. Jango then confronted Tor Vizsla and fought the barbaric Mandalorian warlord through the halls of the now dying ship and even into an escape pod which crash landed on the surface of Corellia. At the climax of the fight, Fett was poisoned and injured, but was saved when a pack of dire-cats came in and killed Vizsla ripping him apart while sparing Fett, thus ending the Mandalorian Civil War and the Death Watch scattered throughout the galalxy, but some surviving remnants continued to persist and remain.

In the years leading up to the Clone Wars, Jango Fett became a bounty hunter and was chosen to be the main template of the clone troopers of the newly formed Grand Army of the Republic. He was one of the one hundred individuals, 75 of which were Mandalorians, to be used to create a bread the new Clone Army and he became the chief advisor for the training of the new clone troopers. During this time, the Death Watch continued to survive and despite being heavily weakened, they managed to survive and operated in secrecy operating under the Mandalorian principal of ba'slan shev'la, or "strategic disappearance" and remained in hiding in the years following Tor Vizsla's death. Twenty years later after the First Battle of Geonosis with the death of Jango Fett at the hands of Jedi Master Mace Windu and the True Mandalorians gone, the Death Watch set its sights on the government of the New Mandalorians, a political and reformist faction that abolished the warrior ways and practices of Mandalore's past and lead a peaceful and neutral Mandalorian state and society free from violence, something that angered the Death Watch and made it their new target. 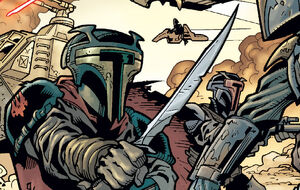 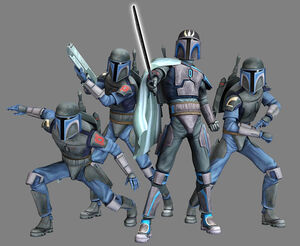 The Death Watch at the time of the Clone Wars.