Deathborn is the main antagonist of F-Zero GX. He is a member of the Dark Million organization and the sitting chairman of the F-Zero Association in F-Zero: GP Legend.

Deathborn is aggressive and ruthless. He is shown to be a bit merciful towards Black Shadow by giving him an opportunity to win the F-Zero Grand Prix. He exhibits megalomaniacal tendencies with his wish for obtaining ultimate power and controlling the universe.

His choice to not be present at the F-Zero Grand Prix recommends that he is someone who prefers to work in the shadows and keep a position of avoiding so much attention.

However, he has no fear of showing himself at the front part of numberless F-Zero fans, just to inflict a sanction on Black Shadow as retribution for an offense, and invite Captain Falcon to engage in a contest. His motives currently remain a mystery.

At the very beginning of F-Zero GX, Deathborn can be seen pursuing Black Shadow. Deathborn catches up to him and wrecks his machine.

He grabs Black Shadow by the neck and Black Shadow begs for one more chance to win the F-Zero Grand Prix. Deathborn agrees but he warns him that if he dares to fail again, the will suffer the consequences.

When Black Shadow lost again in the F-Zero Grand Prix, he appears from a dimensional portal and dispatched him for his incompetence, then he introduces himself to the winner as The Grand Prix Champion of the Underworld. He challenged Captain Falcon into a race for the F-Zero and Underworld belts in the Underworld track.

Upon arriving, Deathborn explains to the captain that their championship belts are condensed forms of Dark and Light, and when they are united, they form a powerful object which gifts the possessor with an incredible power. With that, he swears to turn the galaxy into a pile of ashes instantly.

Upon being defeated by Captain Falcon, he loses control of his car, the Dark Schneider, and runs off the track into a river of lava, dying in an explosion.

Here Deathborn is the man behind Don Genie's actions. He first appears in a dark observation room while watching the F-Zero racers. Alongside Black Shadow's minions, he is considered the most mysterious individual, because he is never seen talking and possesses inhuman abilities.

Towards the end of the series, he tried to obtain the Reactor Mights from Ryu Suzaku, but Captain Falcon managed to stop him in time. Here he is revealed to be one of Black Shadow's shadows along with Don Genie.

Deathborn appears in Super Smash Bros. for Wii U as a trophy, unlockable by clearing All-Star mode as Captain Falcon on normal or higher difficulty without healing in between rounds. 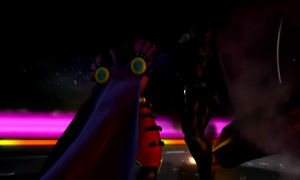 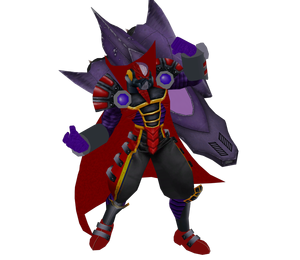 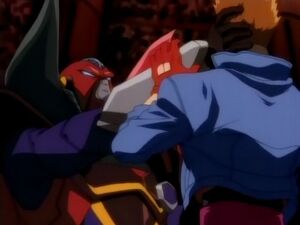