Villains Wiki
Register
Don't have an account?
Sign In
Advertisement
in: How To Train Your Dragon Villains, Fantasy Villains, Movie Villains,
and 38 more

Hunting down whatever dragon Grimmel commands them to.
Intimidating people.

Assist Grimmel with his goals.

Kill Toothless, Hiccup and the rest of their friends (both failed).

The Deathgrippers, also known as Grimmel's Deathgrippers, are the secondary antagonists of DreamWorks' 36th full-length animated feature film How to Train Your Dragon: The Hidden World. They serve as Grimmel the Grisly's personal dragon killers who obey their master on every given command as a result of being drugged by Grimmel with their own venom.

The Deathgrippers were initially free, and were specialized dragon killers who roamed in packs and fed upon other species of dragons. Due to having a knack for killing dragons, Grimmel employed several to aid him in his genocide, using none other than their own venom to drug them into subservience.

The Deathgrippers first appear on Grimmel's airship to Warlord's island. After they reunited, one of the six attacks Ragnar the Rock but it was called off by Grimmel. When Hiccup refused to give Toothless, the last Night Fury, Grimmel ordered his Deathgrippers to burn down his house by their fiery acid.

While Valka was flying, two Deathgrippers attacked her and Cloudjumper, unsuccessfully attempted to knock down Stormcutter as they end up being thrown and the Deathgrippers were called again by Grimmel. When the Dragon Riders came to stop Grimmel, he ordered the Deathgrippers to stop them which nearly killed Hiccup. The Deathgrippers were then attacked by the Rescued Crimson Goregutter who demolished the base and trapped the dragons under debris. With Ruffnut left behind, she was placed in a cage with a Scuttleclaw, of which is predisposed to be fed to the Deathgrippers (to Ruffnut's disgust). Upon supposedly annoying Grimmel into submission, she was set free and given the Scuttleclaw as a means of transportation back to New Berk.

They carried the airship and followed Ruffnut and they were revealed with Toothless and the Light Fury captured. They carried the Warship back to the Warlords' armada. During the battle, Toothless blasts at two Deathgrippers from their shackles, making them unable to hold the ship. The ship then crashed, which causes the two Deathgrippers to drown. While Hiccup and Toothless chased Grimmel who is riding the drugged Light Fury, the four remaining Deathgrippers came to Grimmel's aid to stop the duo. As they formed a tight ring around Toothless, he summons lightning in his Alpha state, and they were all electrocuted to their demise with their corpses sent plummeting.

In the School of Dragons video game, it is revealed that one of Grimmel’s Deathgrippers managed to survive the fall after being electrocuted by Toothless’s lightning. Ironically, the lighting attack destroyed the surviving Deathgripper’s venom inducing collar, thus freeing it from the now dead Grimmel’s influence. Despite this, it’s battle with Toothless has left it weakened and it’s extremely anxious due to its prologued exposure to its own venom. Luckily, the Deathgripper is found and nourished back to health by Fishlegs and is eventually calmed down by the game’s main character who proceeds to tame it. It is presumed that the surviving Deathgripper traveled off to the Hidden World with the rest of the Archipelago’s dragons, and presumably accepted his former enemy Toothless as his new alpha due to no longer being constantly injected with his own venom. Because of this, it can be implied that the surviving Deathgripper is able to live in peace in the Hidden World, now that it has been freed of Grimmel’s influence once and for all.

Deathgrippers have black scales with red underbellies, yellow eyes, and wing webs, and large armored plates along the back. They hold protruding but retractable large tusks, distorted jagged pincers, and a venomous stinger at the end of their telescopic tails that could sometimes be sheathed by four scales when not in use.

According to animator Simon Otto, Deathgrippers were inspired by scorpions, black widow spiders, and hunting dogs.

The six Deathgrippers that appeared in the third movie all wear collars equipped with vials of their own venom that Grimmel uses to control them. One of them has a scarred left eye.

After being brainwashed by Grimmel, his Deathgrippers were hostile and vicious beasts who would assassinate any quarry Grimmel assigned them to with the utmost obedience. Thanks to their own venom being injected into them via special collars, they were thoroughly subordinate to him and no Alpha dragon species could override that obedience, not even the Bewilderbeast.

Even without the effect of venom, Deathgrippers are hardly saints, as they live outside dragon society, roaming in packs to prey upon other dragon species. They are not exactly evil, but certainly rather dark and morbid creatures, as they enjoy drugging their prey into a sedated state with their venom and toying with it before putting it out of its misery, suggesting they have a rather dark but playful personality. Despite this, it is said that one can train a Deathgripper, without drugging it, by saving its life and it will become a loyal friend, suggesting they possess some nobility. However, while wild Deathgrippers killed out of necessity for survival in order to eat and just follow their instincts, Grimmel's were modified into killing machines with much more heightened aggression. 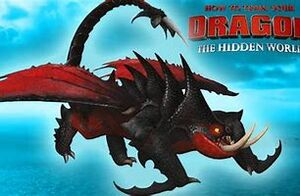 The Deathgrippers gets killed in the explosion.